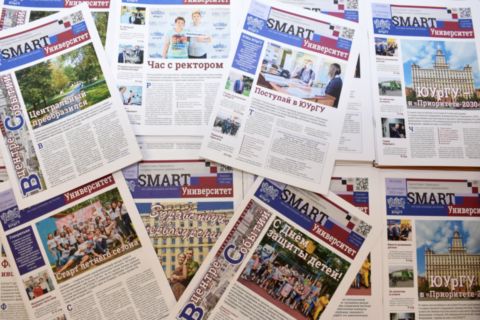 The newspaper of South Ural State University has been published for as long as 65 years now. The university has been growing and developing, and together with it, the newspaper has also been changing; its layout has been transforming, the number of pages has been increasing, along with the number of copies printed, and the title has been changing as well: starting from 1956 – “Politekhnicheskie kadry” (“Polytechnic Personnel”), “Tekhnopolis” (“Technopolis”) later (1991 through 2018), and “SMART Universitet” (“SMART University”) now.

The staff members have been changing: senior authors retired and the new generation replaced them, and some of the former student reporters continued to work in our newspaper and in other mass media. Without overstating it, the newspaper of CPI – CSTU – SUSU has become a true talent factory, which has fostered several generations of journalists. But during its whole life this publication has been unfailingly fulfilling its Herculean task on offering insight into the scientific, educational, cultural, sporting and public life of our university. The oldest mass media in our university keeps up with its work today. This is a sort of a chronicle of our alma mater, which comprises thousands of news pieces written by our teaching staff members and students. The names of some of the former student reporters are now known way beyond the Chelyabinsk Region.

The first issue of the “Politekhnicheskie kadry” (“Polytechnic Personnel”) – a unit of the Party, Trade Union and Komsomol organisations and the Director’s Office of the Chelyabinsk Polytechnic Institute – was dated December 6, 1956. It was a two-page newspaper bulletin of А3 format. Already from the very first issue the “Politekhnicheskie kadry” took on the image of an educating newspaper, one that gave advice and accompanied the life of students. 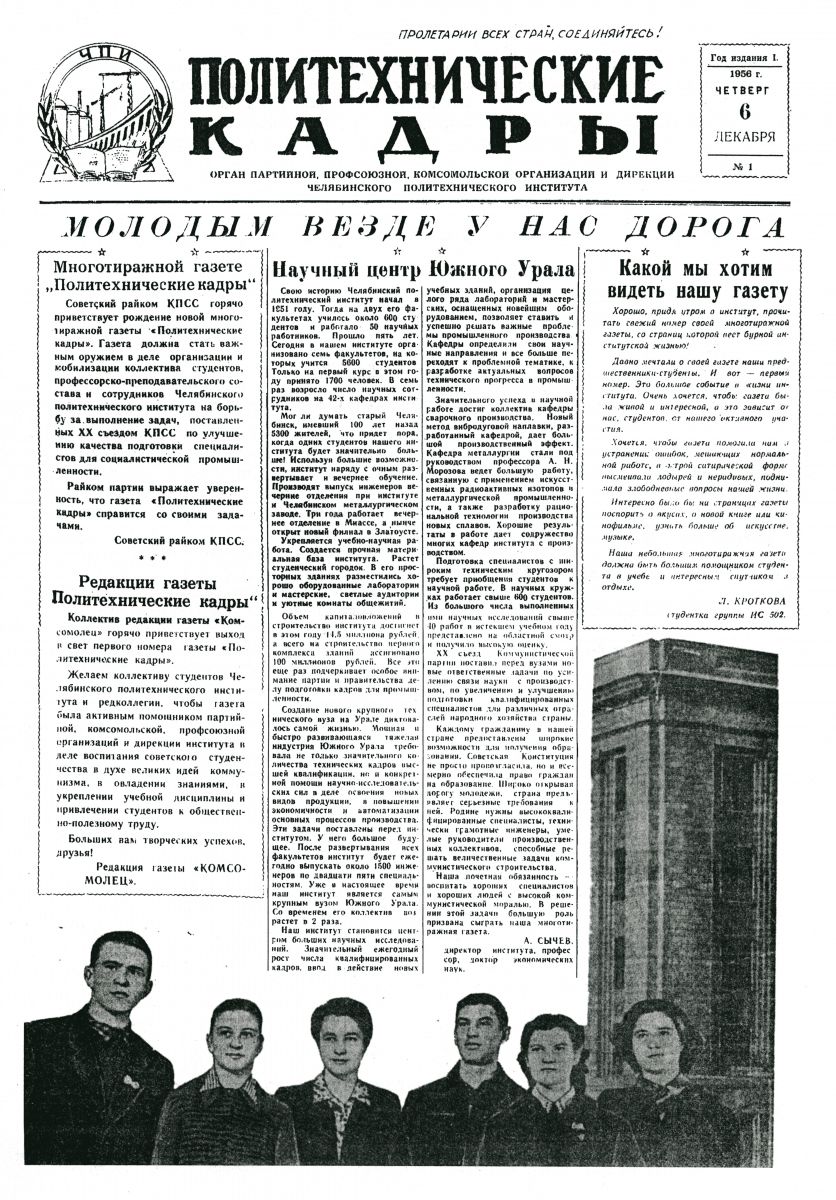 The first issues of the “Politekhnicheskie kadry” were edited by Gilia Palei. For the next 43 years, the newspaper was headed by Candidate of Sciences (History), Honoured Worker of Culture, member of the Russian Union of Journalists, Associate Professor of the Department of History of the Communist Party of the USSR, and author of a number of monographs and encyclopaedic articles Sergei Tulinskii.

In the beginning, one thousand and a half copies of the “Politekhnicheskie kadry” were being printed, and then the number of copies gradually grew to two thousand. The volume also increased: one newspaper bulletin turned into a four-page weekly publication. People remember that the newspaper issues immediately went off like hotcakes. Those who did not manage to get hold of the fresh issue, could find it in the reading room in the Scientific Library.

The topics of the publications were becoming more and more diverse: science, studies, internships, construction, sports, arts and culture, amateur talent groups’ activities, reflection on the past, present and future, on the chosen profession – the newspaper covered all aspects of the CPI life. But since it had only four pages back then, the authors had to willy-nilly write in a concise way and convey the very essence of the matter.

During the Soviet period, the news pieces had to also comply with the times: include special articles on the anniversaries of the October Revolution, May Day, Communist Party Congresses... But also, just like today, there issues about the New Year, International Women's Day, 23rd of February (Defender of the Fatherland Day), and the Victory Day. The newspaper also covered such milestone events as the launch of the first artificial Earth satellite and the first human flight in outer space, and the Virgin Lands campaign.

The CPI newspaper published materials about outstanding people, for instance: Mikhail Lomonosov and Anton Chekhov, on the occasion of their anniversary dates. Stories about such wonderful personae were like guiding lines for serving the Fatherland and morality for students and graduates.

Significant page space was given to the materials for applicants: to stories about different faculties and specialities.

CPI was a purely engineering institute, so in its paper curious problems of interest to the future engineers were published.

One could find helpful advice in the newspaper. For example: what to wear for a party, or how to protect yourself against tick bites.

The “Politekhnicheskie kadry” issues were mostly black-and-white. However, the holiday editions, as a rule, were partially in colour: only red and blue colours were usually used.

In 1990, the Chelyabinsk Polytechnic Institute was renamed into Chelyabinsk State Technical University; and in 1991 the “Politekhnicheskie kadry” transformed into “Tekhnopolis” (“Technopolis”). Only then – and not quite immediately – the newspaper gained colours: the first and the last page, as well as the centre spread became colourful. The “Tekhnopolis” was distributed among all the CSTU – SUSU divisions and branches free of charge. The number of pages gradually increased. In 2014, the newspaper became fully colourful.

High professionalism of the newspaper’s editorial staff was recognized at the all-Russian level. Over the period of 20 years – 1975 through 1995 – the “Politekhnicheskie kadry” maintained its leadership at annual review competitions among university publications. 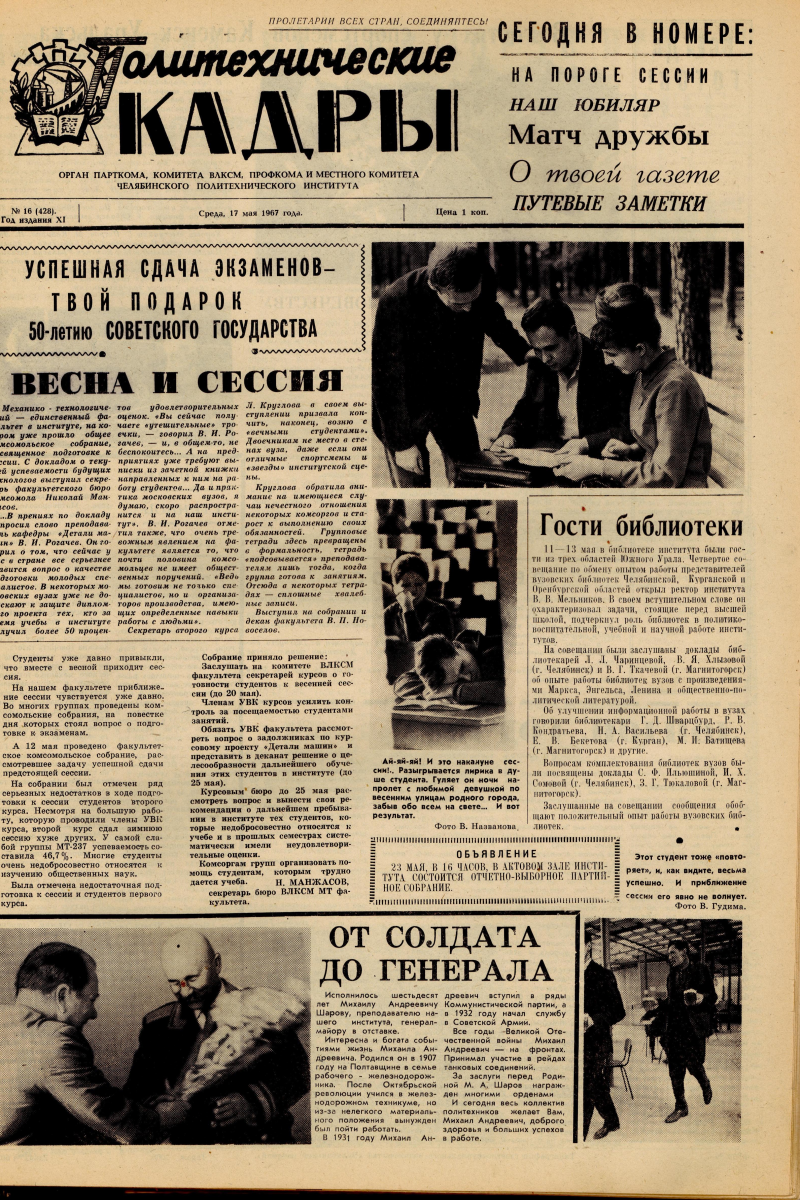 Staring from 1991, the newspaper began to be published at the Department of Journalism. A leaflet appeared, which was a mouthpiece for the future journalists of the “Alma Mater” and which became the 2001 winner of the 6th All-Russian Mass Media Festival “The Whole of Russia”. Since 2006, the publication has taken on yet another role: it has become a sort of a teaching laboratory for the Faculty of Journalism students. But still the newspaper continued to publish the materials written both by students of various specialities, and by the academic staff, and thanks to that, the edition keeps being interesting and up-to-date.

After Sergei Tulinskii retired, he was succeeded in the position of the editor-in-chief by: Pavel Bolshakov, Mikhail Boguslavskii, Iuliia Tarasova. Staring from October of 2007, a graduate of CPI and the Faculty of Journalism of Moscow State University Andrei Glushkov became the editor-in-chief of the university publication. During this period, the newspaper gained volume, and more materials on various topics became published. We should particularly mention the special projects: like the series of publications about front-line soldiers – SUSU veterans, on the occasions of the Great Victory anniversaries, or the cycles about the outstanding alumni issued for the university anniversaries. In 2014, new annexes and special editions of the newspaper appeared. It was then that an Internet version of the “Tekhnopolis” was created. This allowed to not only promptly cover the events, but to also publish bulky materials. Now the authors did not have to “cut out” interesting and important details or to write as concisely as possible. The newspaper website has an archive of the printed edition’s electronic copies available.

Special pages of the main newspaper issues allotted for the materials by the Student Press Centre have always been bright, colourful and emotional. Starting from 2014, a ReTweet leaflet was released in the newspaper, which was issued by the SUSU Information Commission – a successor to the Student Press Centre. Students did practically all the work on the creation of the four pages of the leaflet themselves.

The newspaper became a part of a unique 360-Degree Newsroom, created at the university for comprehensive training of journalists capable of working in the context of modern mass media convergence. In the informational space of the university, the “SMART Universitet”, like the “Tekhnopolis” before it, occupies its own niche. It mostly focuses on preparing explanatory news items and articles, analytical materials, feature stories, big and fully-featured interviews.

In its pages, the “SMART Universitet” covers the events-packed student life, scientific developments by SUSU scientists, plans for the innovative development of the university, its leading role and weight in the higher school community and educational space. In the recent years, the “Tekhnopolis” paid special attention to the university’s participation in Project 5-100. Today, the “SMART Universitet” also provides a detailed covering of the university’s participation in the Priority-2030 program.

Like before, the future journalists take their internships in the “SMART Universitet”. Representatives of practically all specialities write materials for the newspaper.

The SUSU newspaper and its authors have repeatedly become winners and laureates of corporate, city-wide, regional and all-Russian contests and international festivals for mass media.

Over the recent years, special periodicals have been added to the main issues of the “Tekhnopolis” and “SMART Universitet”. The first one of them, titled “V tsentre sobytii” (“In the Thick of Events”) and being published even today, informs about the socially conscious activities of the leadership, of public workers and students of SUSU, about the important role of the university in the scientific, economic, cultural and political-and-social spheres of life of our city, region, and country. Special editions  “Postupai pravilno!” (“Make the Right Choice!”) and “UniverCITY” shortly before the Admissions Campaign provided applicants with detailed information about the university faculties, training programmes and majors, and engaged the future students into the bright, events-packed university life filled with positive vibes. In 2019, a graduate of the SUSU Faculty of Journalism Nadezhda Iushina was appointed to the position of the editor-in-chief of the “SMART Universitet”.

The newspaper of South Ural State University took off on its journey together with the university itself. Looking back, we see that a huge work has been done and we are happy about it. And remembering the hard work and the successes of our predecessors, we shall keep moving forward – together with our alma mater.