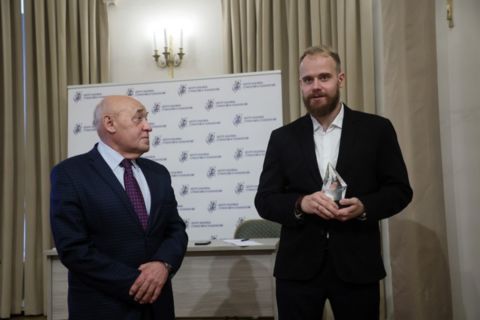 Head of the Laboratory of Experimental Archaeology of the Eurasian Studies Research and Education Centre at the Institute of Media, Social Sciences and Humanities Ivan Semyan has received the Nikolai Ogarkov Military Award in honour of the Chief of the General Staff of the USSR Armed Forces and Marshal of the Soviet Union.

On October 29th in Moscow, the fourth Ogarkov Readings conference was held, which is traditionally organized by the Centre for Analysis of Strategies and Technologies. The event is dedicated to the memory of the outstanding Russian military commander and military theorist, Chief of the General Staff of the USSR Armed Forces (1977-1984) and Marshal Nikolai Ogarkov.

Traditionally, the development of military technologies and their influence on the warfare activities are discussed at this conference. Special attention is paid to the issues of development of the defence industry and its role in strengthening our country's sovereignty. Prominent scientists and figures of the military forces and military-industrial complex participate in this event.

Besides the experts' speeches and panel discussions, as part of this conference, the Nikolai Ogarkov Award ceremony is held where its laureates receive acknowledgement for their contribution to strengthening the defence potential of our country, to the field of military science and military economy, and development and creation of munitions and military equipment. This year, this prize has been awarded to the Deputy Minister for Industry and Trade of the Russian Federation Oleg Ryazantsev, and the Head of the SUSU Laboratory of Experimental Archaeology Ivan Semyan.

Ivan Semyan won the Nikolai Ogarkov Award for his contribution to studying and active popularization of the military history of Russia. Of special interest is the research conducted under his supervision and dedicated to the military and technical novations in the Bronze Age, and namely to war chariots. As it has been proven by scientists when studying the Sintashta culture, these chariots first appeared in the South Ural region and then spread across the whole world. Besides the research, Ivan Semyan carries out educational activity: he regularly speaks at various forums and conferences, and publishes articles in the leading specialized mass media.