How to Make Water Cleaner and Food Healthier: Indian Scientists Talk About Their Research 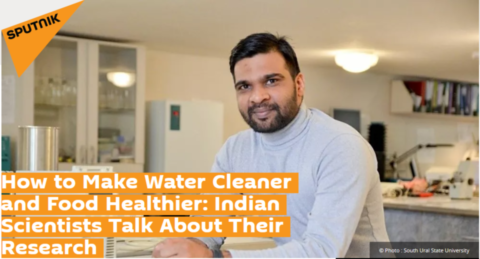 Every researcher dreams of working in a modern lab and releasing their scientific works, but another important factor is being surrounded by professional and inspired colleagues. That's why many scientists travel to other nations to share their knowledge and gain international experience.

What kind of scientific developments are Indian scientists in Russia involved in? Young researchers from South Ural State University (SUSU) in Chelyabinsk have taken time out from their schedules to talk about their work.

Senior researcher from SUSU's Biotechnology Department, Dr S. Venkata Ramana, is working on creating a new biotech laboratory to produce fuels and chemicals from agro-food waste and wastewater under the supervision of the chair of the Department of Food and Biotechnologies, Professor Irina Potoroko.

"A whole variety of crops are being grown all over the world and agro-economic activities are being carried out. At the same time, we can see a high level of consumption and demand for healthy foods. Agro-economic activities produce agricultural and food waste in large quantities. Agricultural enterprises must recycle waste and wastewater, which negatively impacts the climate and the environment. Finding an effective solution to agro-food waste, wastewater, and global climate change issues is crucial for sustainable development", Dr Venkata Ramana explained.

He said that day-to-day biotechnology is constantly being studied to ensure our ecosystem's well-being, to transform pollutants, to develop biodegradable materials, and environmentally-friendly manufacturing and recycling processes. The new, modern lab that Dr Venkata Ramana, along with his fellow scientists from SUSU, are working on will make it possible to conduct the most up-to-date research in this field.

"The thing that I like about SUSU the most is people. They are real professionals. There are some researchers from my department as well as from other university departments who work with me. Besides this, I cooperate with foreign researchers as well", the scholar said.

Dr S. Venkata Ramana noted that the university offers great opportunities for scientific research in the field of biotechnology, and the university's team of professional scientists is always prepared for discussions and critical analysis.

Dr Venkata Ramana is also working on scientific studies, both with his colleagues from SUSU and with foreign specialists. He has worked in Spain, Portugal, South Korea, and China.

"Interaction with foreign researchers, who have experience working in research centres, universities, and laboratories around the world, is crucial for the successful development of the university, as they can share their experience, scientific skills, and fresh ideas with our scientists", he noted.

Dr S. Venkata Ramana plans to continue working in Russia for the foreseeable future, conducting studies in the field of ecological biotechnology.

"Cooperation with scientists from other countries certainly facilitates the exchange of scientific and practical experience. They share their ideas, improving what has already been done. One of the most important directions of scientific cooperation for us is joint work with Indian scientists", Professor Irina Potoroko, chair of the Department of Food and Biotechnologies at SUSU stated.

According to her, the staff at the laboratory for synthesis and analysis of food ingredients is actively participating in an interdisciplinary project called "Ecology".

"We expect significant results from our collaboration with Dr S. Venkata Ramana, who is very experienced in the field of renewable energy. Bioenergy is directly related to ecology", Professor Potoroko added.

The move to Russia has inspired Dr Uday Bagale, providing a stimulus for fresh ideas. He previously worked with professors from Tunisia to develop environmentally-friendly biodegradable packaging materials. In 2016, after having started working with SUSU, the young scientist decided to start another scientific project, this time on the development of a food additive based on curcumin.

"Curcumin has anti-inflammatory, anti-tumour, antioxidant, antimicrobial, and wound-healing effects. Despite its multiple functionalities, the use of curcumin in pharmaceuticals and the food industry is limited as it has low bio-availability and is insoluble in water. Therefore, we're trying to put curcumin into nano-emulsion capsules, which increases its stability. Besides this, we're adding it to food products such as bread and cheese in order to increase their nutritional value and healing properties", Dr Uday Bagale explained.

According to Dr Uday Bagale, he has full access to various SUSU projects and resources. Furthermore, this job is paid. In addition to scientific research, the young man is also trying his hand at mentoring: he's helping a graduate student write an article for an international journal in English, as well as his dissertation.

"The internship in Russia is a great opportunity to learn the language, develop communication skills, and other abilities that will be useful in my career. You can really immerse yourself in another country's culture and make new acquaintances. Moreover, I can look upon my work from another culture's perspectives", Dr Uday Bagale noted.

Dr Bagale said that he would like to continue working at the university. He does not want to leave Russia as Chelyabinsk has become his second home.

"The opening of the international laboratory of 'Synthesis and Analysis of Food Ingredients' at the university in 2016 under the supervision of Dr Sonawane Shirish Hari - a renowned scientist in the field of chemical engineering, was a starting point for the formation of a scientific team working on the development of encapsulation methods for biologically active substances", Professor Potoroko said.

"Dr Uday Bagale is currently involved in research with Kadi Amar, a postgraduate student from Syria, to obtain food emulsions with the desired properties. The purpose of this research is to develop new approaches for the production of targeted foods", the professor said.

Dr Bagale earlier worked on a team of master's students from the Department of Food and Biotechnologies to develop biodegradable dishes made of starch and pectin-based plastics.

In 2021, the new English-language master's programme "Industrial and Environmental Biotechnology" at SUSU's Department of Food and Biotechnologies began. The latter is being carried out in collaboration with the Technology Institute of Warangal (India), the University of Melbourne (Australia), the Shenyang Institute of Technology (China), and leading Russian universities. Dr S. Venkata Ramana and Dr Uday Bagale are among those tutoring in the programme.