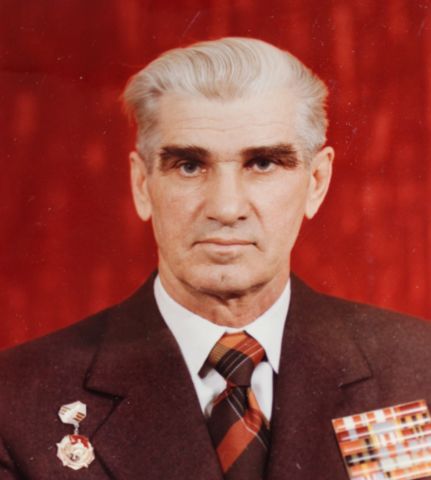 Leonid Gorovoy was born in Lomovatska village in the Voroshilov Region on March 10, 1917. In 1934 he graduated from the workers' faculty (remedial school for workers) in Donetsk, and in 1935 he enrolled in Kharkiv Electrotechnical Institute.

The war for Leonid Gorovoy began just like it did for millions of people in our country. It was an ordinary early summer Sunday. Together with his friends he was watching a play in the Voroshilovgrad theatre when an order was issued for all the military servicemen to immediately arrive in their units. The peaceful life was over.

A 20-year-old young man Leonid Gorovoy, 2nd-year student of the Kharkiv Electrotechnical Institute, on Komsomol assignment he came to the Melitopol Aviation School of Navigators in 1937.

Having graduated from the Aviation School, he worked as an instructor in a pilot school in Voroshilovgrad. That is where the war found him. Soon, the school was evacuated to the town of Uralsk.

In February of 1942 lieutenant Gorovoy filed a request to send him to the front. And he was sent there as a navigator of a light bomber element.

His baptism by fire happened for Leonid Gorovoy on the Bryansk Front in March of 1942. That was when he first met the enemy and realized that they were strong, experienced and fierce. And then the mission flights became regular for him. The missions took place daily and almost always at night. There were so many of those sleepless nights! Of course, there were minutes of rest as well. During these minutes everyone was thinking about their home, their nearest and dearest ones, and their loved ones. They were dreaming of the peaceful life after the war. As was Leonid Gorovoy. And that belief in a better tomorrow, belief in the victory was an inspiration for the pilots.

Soon, as a member of the special operations night bomber regiment No.289, captain Gorovoy together with his comrades-in-arms was transferred from the Bryansk Front to the Kalinin Front. Besides the missions aimed at destroying the enemy's combat points, they needed to help the Belorussian and Ukrainian guerrilla warriors.

At nights, a high speed plane bomber towed a glider loaded with guns, food, and medicines. Often, it would transport people to move behind the enemy lines.

To learn how to fly the new Tupolev Tu-2 aircraft and to form the new regiment, Gorovoy was sent to Moscow. After that other missions followed. Over the war-time years, captain Gorovoy participated in the battles on the Bryansk, Kalinin, Leningrad Fronts, on three Baltic Fronts, and on two Belorussian Fronts. By the end of 1944 he had flown 118 combat missions, dropped straight 250 tonnes of bombs, and destroyed many equipment and manpower forces of the enemy.

In December of 1944, one of the last outposts of the German forces was the Courland group with its main part located in Liepāja seaport.

The day before, nine planes navigated by captain Gorovoy, had flown to Klaipėda and had successfully bombed the German forces gathered in the port. On the same day, upon the combat alert, they had been immediately sent to Liepāja seaport.

The air forces of the Baltic Fronts were given a task in a concentrated attack to defeat the fleet vessels, combat equipment and manpower forces of the enemy located in the port. The Tu-2 aircraft bombers of the group of Leonid Gorovoy aimed for the goal.

It was his 119th mission. The Gorovoy's aircraft was following the flight lead. That mission No. 119 became etched in the memory of Gorovoy down to the last detail. When they neared their aim, the sky was full of shell bursts. The pilot steered the course accurately and right through the dense sheet of flak. Having straddled the target, the bomber aircraft turned to fly back to their aerodrome. Suddenly, the nine planes got attacked by two groups of Messerschmitt aircraft. There were twenty of these. Despite the obvious advantage of the enemy, the Soviet pilots accepted the battle. For many of the companions in arms of Leonid Gorovoy that battle became the last one. The enemy suffered extensive losses, but the forces were unequal. One Messerschmitt aircraft tail-chased the plane of Gorovoy. The crew fired a multiple-round burst, and the German fighter aircraft began to fall in a flash. At this very moment the enemy's projectile hit the cabin, the plane was thrown sideways, the gunner and the radio officer were killed, and the right engine was on fire.

The cabin filled with smoke, it was hard to breathe. The plane was losing height. They could not try to reach their forces since every minute of their staying onboard could become the last one.

The pilot in command Listarev fell unconscious. With an impossible effort Leonid Gorovoy broke open the cabin hood, grabbed the commander by the parachute straps and with him rolled over the board of an incontrollable plane.

The friends parted in an unusual way. Listarev came to his senses during the free fall, later he deployed the parachute and landed on neutral ground, where our land forces picked him up.

Leonid Gorovoy, in the moment of breaking away from the plane, got hit pretty hard and hurt his leg and arm. His mukluks fell off his feet while he was landing, and he hit the snow barefoot. And while landing and falling unconscious he noticed that soldiers in foreign trench coats were running towards him.

Thus Leonid Gorovoy was taken captive. In Liepāja, together with other captive pilots, he spent about two weeks and kept thinking how to escape. First, he tried to do that when our air forces struck Liepāja. The roof of the barrack where everyone was quartered was knocked off by the shock wave. The prisoners decided to make use of this chance, but their guards stopped them with submachine gun bursts. Soon, the pilots were joined by a captive Vlasovets (member of the Russian Liberation Army), who pretended that he wanted to help the Soviet prisoners.

He gained their trust, fetched pliers using which they had to remove the bars off one of the windows. But the Vlasovets betrayed the pilots and turned them over to the Germans who savagely beat the prisoners. That was how the Gorovoy's second attempt to escape ended.

On the eve of the new year of 1945 a group of captive pilots was sent to Germany, and Gorovoy was among them.

In one of the camps he met a teenage girl Liudmila. Once he managed to pass her the address of his parents and asked her to write to them. When released from captivity, Liuda complied with his request. She wrote to them how and in what circumstances their son had been taken captive.

After long squandering in camps Leonid Gorovoy found himself in the "Castle" central camp for pilots. He reminisced:

"Here we were well fed, and we slept on beds made with crisp white bedsheets. The Germans tried to convert the Soviet pilots to join the Russian Liberation Army – the army of betrayers of the nation. But the pilots remained true to the oath. And kept thinking how to escape."

And yet another transfer followed. Our pilots were moved to an international prisoner-of-war camp in Weiden to the south of Germany. The attitude to the Russians was more severe here, they were being isolated from other prisoners.

From here Gorovoy under convoy was sent to Lichtenstadt labour camp. There he met a comrade-in-arms Semen Pavlovsky, and made friends with two more prisoners. They lived in the same barrack and were whipped to work in the same shift.

Leonid Gorovoy was chosen as a person in charge of organizing their escape. They began to cautiously prepare to it. They decided to escape through an impassable marsh, which everyone fearfully bypassed.

On January 19th, during the shift change at the plant, they made use of the turmoil, and one by one they dodged behind the warehouse barrack. Climbed over the barbed wire and ran towards the marsh. Almost completely exhausted, they crossed the marshland and got to the opposite coast of the bog. They heard dogs barking behind them. But having made sure that the pursuers were on the wrong track, they exulted and felt happy like little kids. Next they walked east, walked only at night time, and in day time they sought shelter in all sorts of places.

In spring of 1945 they met the guerrilla warriors on the territory of the Czech Republic. The front was moving westwards. Leonid found himself in Brno.

Following the order by Stalin, those who had been taken captive had to undergo a detailed checkout procedure. Before returning to his regiment No.445, Gorovoy travelled through Podolsk, and Alkino in the vicinity of Ufa.

"I remember the Victory Day parade. Our regiment also participated in it. We flew in a Tu-2 squadron trail formation. We trained for two weeks for this parade. We felt excited just like before the battle. Those who watched our flight from the ground remained pleased. The aviation did not let anyone down once again. Later we saw the filmed images that captured that joyous and majestic spectacle."

After the checkout Gorovoy was sent to the Far Eastern Front to the war against Japan, and then to see service on Sakhalin island.

Before that he visited his mother who had been mourning for him because she had thought he had been dead.

In 1949, after the top-level officer schooling in Ivanovo, Leonid Gorovoy was sent as a senior navigator to Chelyabinsk Branch of Air Forces Military Education and Research Centre “N.E Zhukovsky and Yu.A. Gagarin Air Force Academy”, where he served for 11 years.

A veteran of the Great Patriotic War, holder of five orders and thirty one medals, colonel Gorovoy worked as the head of the SUSU Laboratory for Heat and Gas Supply and Ventilation for 36 years.

For his valour and bravery demonstrated in the air fights, and for his assistance to the guerrilla warriors Leonid Gorovoy was awarded by our Motherland with the Order of the Great Patriotic War of the 2nd class, the Order of the Red Star, and two Orders of the Red Banner.