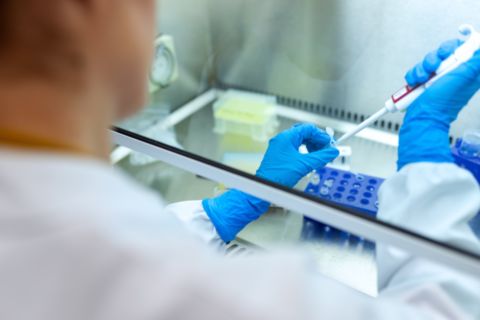 New effective compounds, which can be endogenous donors of a signaling molecule - hydrogen sulfide in the body, were synthesized by SUSU scientists. Due to this property, the obtained compounds are potential drugs with a cancer-preventing effect. The research work was published in the Russian Chemical Bulletin (Q3).

Organosulfur compounds with anticancer, antibacterial, and antirheumatic properties have been studied for some years by scientists from South Ural State University and N.D. Zelinsky Institute of Organic Chemistry, Russian Academy of Sciences. In the latest study, they attempted to search for new derivatives of 1,2-dithiol-3-thiones - compounds with various biological activities.

Several years ago, scientists proved that the 1,2-dithiol-3-thione fragment is an efficient endogenous donor of hydrogen sulfide in the body. It means that it can increase the gas content in human blood and tissues. One of the most studied hydrogen sulfide donors in the world is 5- (4-hydroxyphenyl) -3H-1,2-dithiol-3-thione. Scientists have previously developed an effective method for producing the compound. In the last work, the researchers reflected the strategy of a fundamentally new way of introducing a dithiolthione fragment based on the previously synthesized 4,5-dichloro-1,2-dithiol-3-thione into hybrid molecules.

G. B. Elyakov carried out the synthesis and proof of the structure of new compounds in the joint laboratory of SUSU and the Institute of Organic Chemistry of the Russian Academy of Sciences, with his colleagues from the Pacific Institute of Bioorganic Chemistry. The scientists tested the efficacy in mouse epidermal cell models (JB6 Cl41 P +) and in soft agar human leukemia cell models. The study of cancer preventive (anticancer) activity was carried out at the Pacific Institute of Bioorganic Chemistry. The cooperation of groups working in various fields of science has become a distinctive feature of research.

As a result, the scientists synthesized six new acetylthioglycoside derivatives of 4-chloro-1,2-dithiol-3-thione. It has been established that all of them can be used as potential drugs with anti-cancer effects.

The research is fundamental. In the future, scientists intend to obtain other compounds, fragments of which can release two or even three endogenously produced signaling molecules of hydrogen sulfide, carbon monoxide, and nitric oxide. The findings can create a breakthrough in obtaining multipurpose drugs and are of interest to organizations specializing in cancer preventive therapy.

South Ural State University (SUSU) is a university of digital transformations, where innovative research in most of the priority areas of science and technology is carried out. Following the strategy of scientific and technological development of the Russian Federation, the university focuses on large scientific interdisciplinary projects in the digital industry, materials science, and ecology. In the Year of Science and Technology, SUSU will participate in the competition under the Priority-2030 program. The university performs the functions of a regional project office of the Ural interregional world-class scientific and educational center.