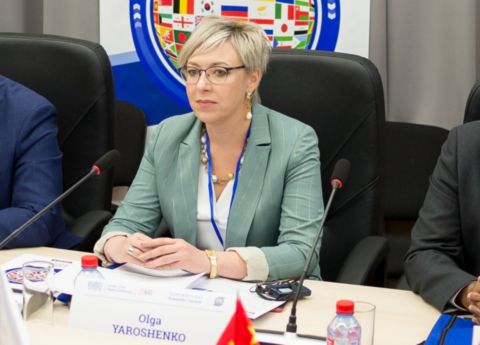 The 9th World Women University Presidents Forum (WWUP) was held in November. Reports were presented by the participants online on ZOOM and in person in Xi'an, China. The sections of the 2020 Forum were devoted to global mutual assistance, education in an intercultural context, and innovations in higher education. For the first time, Vice-Rector for International Relations of South Ural State University Olga Yaroshenko delivered a speech at such kind of forum with a report on the "Modern Universities: Global Challenges" in the University Governance and Sustainable Development section.

In her report, Olga Yaroshenko noted that South Ural State University is a leading research university in Russia. SUSU actively promotes international cooperation between Europe and Asia with highly qualified scientists to conduct advanced research. South Ural State University is a SMART university that unites Europe and Asia. The university has more than 300 valid agreements with foreign universities, transnational corporations and major manufacturing enterprises from 60 countries.

More than 2300 students come to our university from 56 different countries, and the learning and research environment is supported by over 2000 lecturers, professors and researchers, most of whom are recognized in the home country and abroad. The university offers 172 Bachelor's degree programmes, 126 Master's degree programmes, and 24 postgraduate programmes being fulfilled at its 3 schools and 7 institutes. More than 50 educational programmes are implemented as part of project-based learning, which contributes to a significant increase in the quality of education and the competitiveness of graduates.

South Ural State University has made a confident step towards becoming one of the world's leading universities and was ranked 801-1000 in the QS World University Rankings. Another significant event was being listed in the THE World University Rankings ( where the university was ranked 1001+), and THE Impact Rankings (at the position of 401-600), what testifies to SUSU's great contribution to achieving the global Sustainable Development Goals defined by the UN. In addition to world rankings, SUSU holds high positions at the national level and ranks No. 14 in the national ranking list of Russian universities by the Russia Today International News Agency. These achievements correspond to the SUSU mission – creation and application of scientific knowledge and training of a new generation of leaders capable of solving global tasks on sustainable development and changing this world for better.

"Elaborating the sustainable development policies, and a proper long-term strategy with consideration to the assessment of emerging risks allow to neutralize a significant part of possible difficulties and refine the research and education spheres of the university. Today, SUSU is a platform for innovative developments, a starting point for today's youth, for a generation of ambitious and self-confident people, and their audacious ideas and projects. At present, the focus of the SUSU science and innovation strategy is put on three long-term goals: achieving world-class breakthroughs in priority research fields; promoting sustainable development of the Ural region through innovation; and developing entrepreneurship in high-tech spheres," says Olga Yaroshenko in her report.

The Vice-Rector emphasized that the university is actively creating an innovative environment and developing small business. Over the past five years, the innovative infrastructure of SUSU has made it possible to create 68 small innovative enterprises in order to commercialize the results of the university's intellectual activity. Its main academic partners are the University of Oxford, UK; Heidelberg University, Germany; National School of Engineering, Saint-Etienne, France; Lappeenranta-Lahti University of Technology, Finland; Technical University of Darmstadt, Germany; and National Institute of Technology.

Since 2001, eight major forums in China and ten sub-forums in New Zealand, Japan, the USA, Turkey, Zimbabwe, Mexico, Nepal, Finland, Romania, and Russia have been held as part of the World Women University Presidents Forum. Over the past 20 years, over 1100 female university rectors from more than 100 countries and regions have taken part in the Forum. The World Women University Presidents Forum is organized by the Women's Leadership Academy, Xi'an University of Technology, Communication University of China, and the WWUP Organizing Committee.