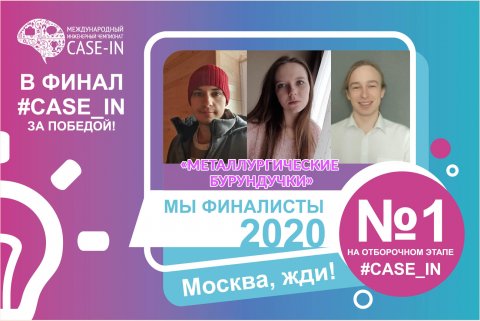 Students from South Ural State University took part in the qualifying stage of the 8th CASE-IN International Engineering Championship, which is a part of the “Russia Is a Land of Opportunity” presidential platform.

The championship takes place in 57 universities in Russia and the CIS countries. During the qualifying stages in February - May 2020, more than 10000 future and young engineers of the fuel and energy and mineral resource complexes are solving engineering cases on the single topic of the championship “Technological Upgrading”, one of the priority topics for the Russian and world economies.

The CASE-IN championship competitions were promptly transferred to the distant format due to the anti-epidemiological measures in the regions of Russia: student teams presented their solutions in the field of metallurgy online. The experts, the representatives of Chelyabinsk Pipe-Rolling Plant and SUSU, evaluated students' ideas online and selected the best teams.

Students developed their ideas in just 10 days: future metallurgists improved the technology to produce vanadium, which is necessary for the production of steel and cast iron.

The “Metallurgical Chipmunks” team: Viacheslav Lezin (team captain), Iana Motovilova and Mikhail Lepikhov won the first place and a ticket to the finals of the championship.

“This case is topical, since the demand for high-quality alloy steels is constantly growing, and Russia has the potential to reach the world level in the production of ferrovanadium. It was difficult to decide in which direction we should start developing our solution, at first we were stumbling in all our assumptions, but the more we worked, the clearer everything became,” says the captain of the winning team Viacheslav Lezin. “Participating in the CASE-IN, we have learned how to work in a team, and distribute the time and efforts to solve the problem correctly. Our team members always try to participate in such contests, try their hand in everything where they can prove themselves.”

The 2nd place was taken by “BEMS” team, the members of which were Alyona Bukharina (team captain), Aleksey Bachurin, Elza Israfilova and Alexander Punda.

The final of the CASE-IN International Engineering Championship will be traditionally held in Moscow and will bring together the best student engineering teams from 57 universities from across Russia and the CIS countries.

The winners of the championship finals will receive valuable prizes, the opportunity to participate in the all-Russian industry-related summer forums, the admission benefits to Master’s degree programmes and postgraduate studies, and will also be able to take internship at leading companies of the sector.