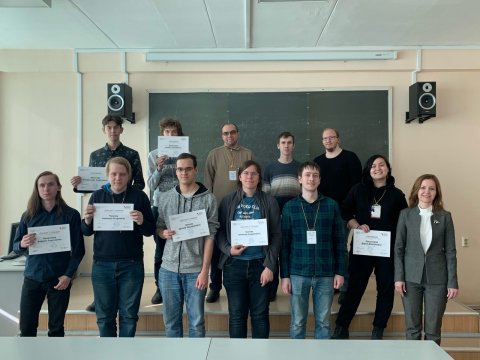 For the first time, student training camp in sports programming was held at South Ural State University. In addition to students from Chelyabinsk universities, teams from Irkutsk and Yekaterinburg took part in the training camps.

The regional venue for the student camp was organized by the Institute of Natural Sciences and Mathematics in collaboration with the SUSU Centre for Olympiad Programming and the Boiling Point Co-working Centre.

"These events are very useful for students, because they get a real opportunity to compete. In addition to the fact that they compete, they also receive useful information when analyzing problems. Our students do not need to go anywhere, this is a unique opportunity to participate in training camps and gain experience at home," says Director of the SUSU Institute of Natural Sciences and Mathematics Alena Zamyshliaeva.

Traditionally, the best teams from educational institutions are invited to the training camps. Every day throughout the entire camp period, students in teams of 2-3 people took part in thematic contests in programming, which were held according to the rules of the ICPC, with the exception that the camp participants could use any reference materials, including the Internet. After each contest, students took part in a detailed analysis of the problems. The program support of the training camp was provided by the Ural Federal University named after the first President of Russia B.N. Yeltsin.

One of the participants was the student of Irkutsk State University Daria Zakoulova. The girl majors in Mathematical Support and Administration of Information Systems.

"At our university, programming is actively developing. We regularly attend training lessons, prepare for the Olympiads. As part of this preparation, we came to South Ural State University to participate in the training camp. I really liked it here! Every day we solved a large number of problems, many of them were quite complicated. After each test, we analyzed the problems that we solved. I hope that the experience gained here will help me get to the World Programming Championship in Moscow."

A participant from the Ural Federal University, Ekaterinburg, was Alexei Bykov, who had chosen to major in Fundamental Informatics and Information Technology.

"I am glad that I was able to cope with a large number of the proposed problems. This is not the first time I take part in such training camps, because for me it is necessary to prepare for the International Student Programming Competition. I really liked both the city of Chelyabinsk and South Ural State University."

In the final of the training camp, the awarding of participants was held. According to the results of the overall score, the guys were awarded winners' certificates and certificates of participation.

It should be noted that the event was held in order to improve the quality of students' training in the field of software development, and as part of preparation for the participation of university teams in the Student World Programming Championship.

Marina Kovyazina; photo by the author