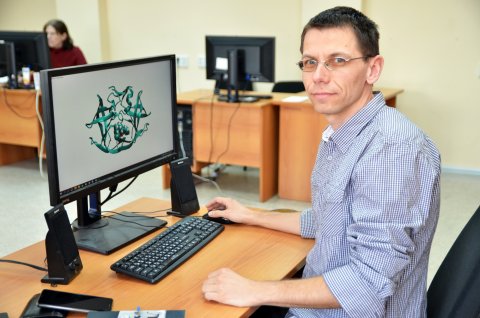 Scientists at South Ural State University, in collaboration with colleagues from Germany and Croatia, have developed a new method for computationally aided drug design, which will create more effective new-generation drugs for treating viruses, including HIV. The results were published in the highly rated journal Future Medicinal Chemistry.

Safe and effective should be used widespread. In modern pharmacology, a targeted molecular drug design based on computer technology is used. The team of the scientists from Research Laboratory of Computationally Aided Drugs Design of South Ural State University is improving this method to make the production of drugs less expensive and more efficient. Russian scientists use interdisciplinary approach entering the field of chemistry, biology, medicine, mathematics, information technology.

“With agreement and leadership of Vladimir Potemkin and Maria Grishina, I entered into the field of cheminformatics, trying to design new descriptors and create new models that correlate structure of the molecules with their properties. In later phase of the development Prof. Dr. J Gasteiger (FriedrichAlexander-Universität Erlangen-Nürnberg, Germany), one of the pioneers who introduced the radial distribution function into chemistry, joined to our project. We modified well known radial distribution function using modern computer technologies”, – says Doctor Jurica Novak.

Currently, computer aided and mathematical modeling methods are widely used to determine the physical and chemical properties of substances. SUSU scientists have created descriptors, numerical identifiers of chemical compounds based on the radial distribution function, thus it becomes possible to accurately predict the physical and chemical properties of a substance and its potential effectiveness, as well as its interaction with other chemical compounds.

At the initial stage of the project, the scientists applied virtual screening approach to the structure of the drug molecules. It helped to determine the potential of pharmaceutical application, including for viruses treatment. The studies are carried out using unique software, which was created by researchers at the Research Laboratory of Computationally Aided Drugs Design at South Ural State University.

“In the next stage of the project we plan to apply it to real world problems. The HIV virus is the biological entity with the highest reported mutation rate. High rate of mutations is one of the reasons for the emergence of the drug resistant variants and present great challenge for the design of new drugs with less side effects for inhibiting HIV- 1 protease. By inhibiting this enzyme, the maturation of the viral entity is stopped, and the result is the production of immature, noninfectious viral particles. Our focus is now on understanding point mutations in the primary structure of the HIV-1 protease, e.g. we want to connect mutation with structural changes of the enzyme and the emergence of the resistance. First results are promising! Understanding the mechanism behind structural changes in the enzyme in the virus and virus resistance is the way to create more effective drugs” – adds Doctor Novak.

Using the method developed by scientists of South Ural State University in pharmaceutical industry will help to theoretically predict such properties as toxicity of the potential drug, one can avoid the need of conducting synthesis of the molecule and expensive pharmacological and biological testing. Thus, research results can be used in the pharmaceutical industry to design new drugs with better properties and hopefully, without side effects.