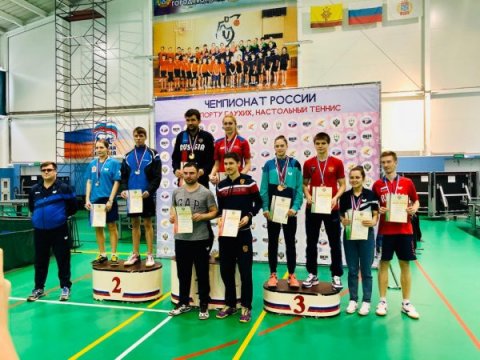 The Table Tennis Russian Championship was held in Cheboksary March 10th through 16th 2020. A South Ural State University student took part in the championship and earned the bronze medal in the singles and women’s doubles events.

More than 60 athletes with hearing impairments fought for medals at the Russian Championship in three categories: singles, doubles, and teams. Players came to participate in the competition from the Chelyabinsk, Moscow, Nizhny Novgorod, Orenburg, Samara, Novosibirsk, Ulyanovsk, Leningrad, Tyumen, and Kemerov Regions; Kazan, Saint Petersburg, Moscow, the Chuvash Republic, Tatarstan; and the Krasnoyarsk and Krasnodar Territories.

Student of the Institute of Sport, Tourism and Service (ISTS) Alena Lopina earned the bronze medal at the Russian Championship in singles and women’s doubles events and became the winner in the mixed doubles event. Alena also satisfied the requirements to be named Master of Sport of Russia. Congratulations to Alena and her coach, Konstantin Popov! We wish them success as part of the national team of Russia at the World Championship in Austria! 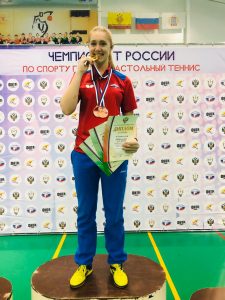