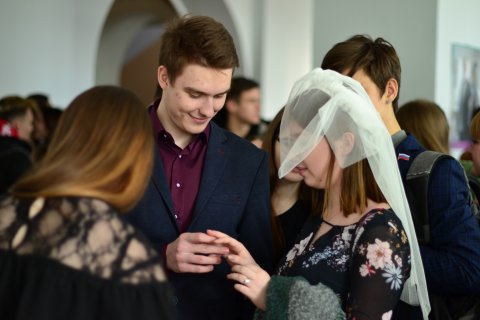 This event dedicated to Valentine’s Day was held for the fifth time. The main station was “registration”. At this station, a couple gets married, with putting on the rings and a veil, and after that the newlyweds take photos.

“This event is aimed at cultural development. During their studies, students forget about the atmosphere that can exist here, and at our event they can relax, have fun, and win prizes,” said the event organizer Mariia Kipreeva.

Next, the participants had to go through various stations. At one of those, they took part in a quiz about which one of them was stronger, more responsible, etc. They also participated in a contest to toss coins, cards, and beans into a hat, and in other entertaining tasks.

“We participated in various contests. This is a regular and necessary event. There was an event called “Hit the Hat”, I didn’t manage to do it even once, but I liked it. And everyone gets top marks at the compatibility station. There, we had to answer questions like “Who is stronger, who likes sports more?” and so on,” said event participant Dmitriy Barsukov.

In addition, students had the opportunity to make valentine’s cards with their own hands and give them to their partners.

“I took photos, posted on Instagram, drew a lottery ticket and won two energy drinks, and also made a 3D valentine. Overall everything was great,” noted SUSU student Elizaveta Gallyamova.

During this event, a giveaway was held for all students. To participate, the students had to take a picture in the special wedding photo zone, use the hashtag #студсвадьба, and subscribe to the VKontakte group. The organizers offered prizes including a trip to the movies, to experience VR, or a sticker pack. According to the students, they were happy to have a chance to practice for their future wedding.