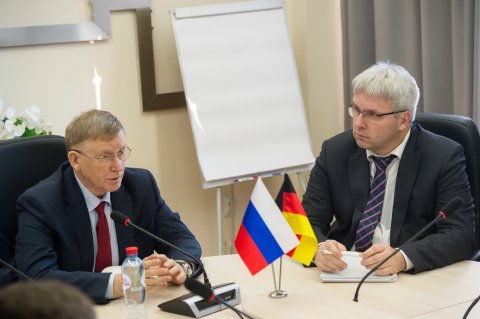 The executive managers and representatives of SMS Group, Germany, a well-known metallurgical equipment manufacturing company, visited South Ural State University to discuss the development of cooperation. During the visit of the SUSU partners, the agreements were reached on the next joint steps in cooperation in the field of technological processes digitalization.

The delegation consisted of the SMS Group Vice President Markus Reifferscheid, Senior Project Manager Sebastian Schultz, and Technical Director of SMS Metallurgic Service, the SMS Group service division in Chelyabinsk, Andrey Shapiro. At the beginning of the meeting, the SUSU Rector Aleksandr Shestakov noted that cooperation with SMS Group was important for the development of the university according to a new strategy:

“Reliable partner relations have been established between SUSU and SMS Group. We have been working on a joint project where we have demonstrated our competencies. Communicating with the SUSU Honorary Professor Pino Tese (SMS Group President and CEO) we have reached an agreement in a principle that our interaction should be more of an in-depth character. One of our priorities in the development of our university is digital industry and we want to work in this field together with your company more efficiently. SMS Group is the world leader in the field of metallurgical equipment, and we also focus on becoming a truly international university, so we attribute great importance to this cooperation.” 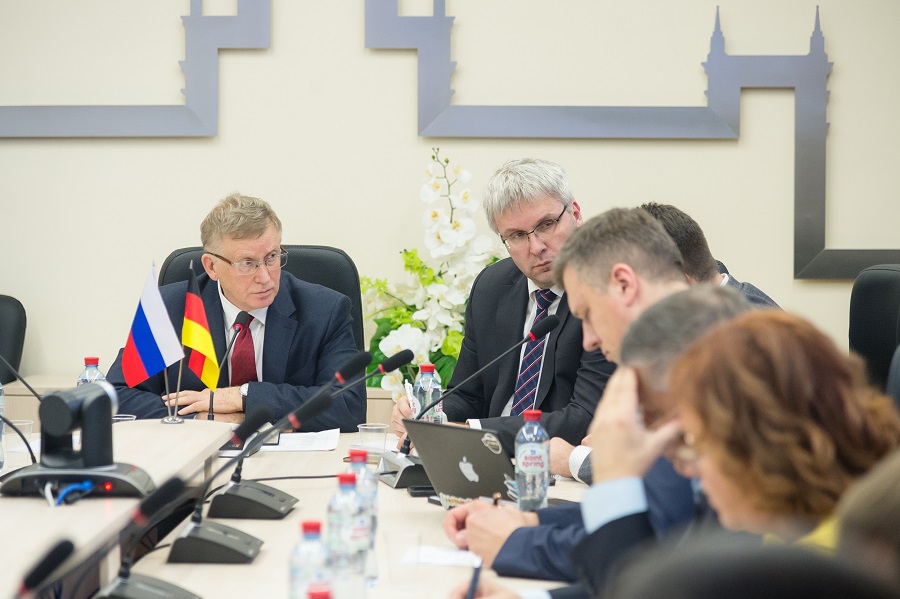 The central topic of the meetings was the discussion of possible improving the servicing of equipment for common industrial partner that is Magnitogorsk Iron and Steel Works (MMK Group), which is one of the major steel manufacturers and leaders among the Russian ferrous metallurgy enterprises.

During the round table the SUSU research team introduced three projects on digitalization of production processes: the first project was connected with the intelligent analysis and prediction of development of equipment damage processes, the second project was the development of engineering solutions for wireless monitoring of process parameters, the third project was connected with the development of VR/AR simulators and virtual units applied in metallurgy. For example, the first case had been implemented in MMK Group; its main objective being to reduce equipment downtime, and thus the projected average annual effect of reducing losses should amount up to 40 million roubles.

In their turn, the representatives of the company presented their projects in the field of digital industry, and SMS Group and MMK Group interaction as well. The German and Russian companies have been cooperating for more than ten years since 2008 when the agreement was concluded on servicing МНЛЗ No.6 (which is the continuous steel casting machine) supplied by SMS Group. At present, over 650 employees of Chelyabinsk service branch, who provide service maintenance online and offline, have been working at Magnitogorsk Iron and Steel Works. In this connection, the SMS Group is interested in the SUSU scientific potential.

“We consider our service division in Chelyabinsk as a kind of a showcase on digital technologies. It is clear that any things that support the idea of service maintenance, all these cases that have been presented: analysis of the systems, their states based on data, using augmented reality technologies and other things – all these can be a support for our service ideas. It is obvious that we should establish cooperation with local partners in Chelyabinsk and agree with the customers on what will be beneficial to them,” noted Vice President of the company Markus Reifferscheid. 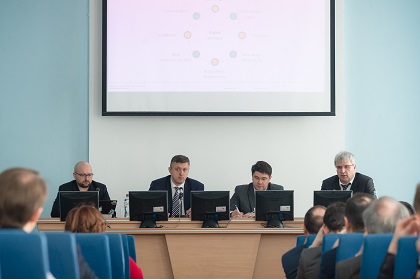 The representatives of the SMS Group identified the role of digitalization in production in general within a separate workshop and shared their experience in the field of monitoring of technological processes, told about digital tools applied for service maintenance. They also shared their vision on joint projects with SUSU.

“At the interim meeting we decided to conclude an agreement on cooperation and a confidentiality agreement in the field of digitalization between SMS Group and SUSU. Afterwards, we will prepare joint cases with the SMS Service Division. Within the framework of the signed agreements there will be internal data exchange on tasks that are topical for metallurgical industry,” summed up the results of the SMS Group visit Head of the SUSU Research and Innovation Services Anton Nurkenov.