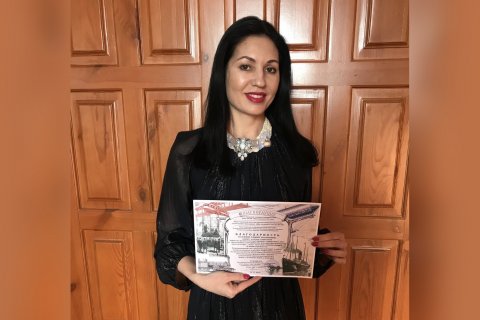 Associate Professor of the SUSU Department of Sociology, Candidate of Sciences (Pedagogy) Elvira Valeeva has received an official letter of thanks from the Coordination Council of the “Step Into the Future” Russian Youth Program for many years of successful partnership and fulfilment of the program for Chelyabinsk Region schoolchildren.

During the correspondence stage, Elvira Valeeva and Masters’ students from the Department’s second year of study evaluated works by students from Chelyabinsk Region general and technical schools sent in to the Sociology category. With every year, the number of works submitted increases: in 2019, more than 30 students participated in each correspondence stage. The best projects were chosen to participate in the in-person stage.

During the in-person stages of the conference, which were held in September and December of 2019, the expert commission of sociologists headed by Elvira Valeeva evaluated not just the research interests and quality of research completed by the young researchers, but also their ability to answer questions and speak in front of an audience.

The Department of Sociology also received an official letter of thanks, in which the Coordination Council of the Step Into the Future program noted the large contributions made by the Department to “the task of training the new generation of future Russian researchers and intellectuals.”