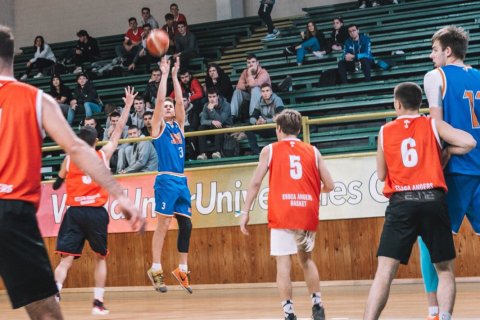 On January 25, the Educational and Sports Complex of South Ural State University will host the 2nd round of the Regional Male Amateur Basketball League Championship among male teams of 2019-2020 season with the participation of the SUSU Team.

South Ural State University takes part in the regional basketball championship for the first time. The 1st round for the teams from Chelyabinsk, Satka, Chebarkul and Ozyorsk took place on January 18. Until the end of February, the teams will play joint matches after which the play-offs will open. In the end of March, the final will take place, and we will find out the name of the winner of the regional championship.

“Our players are well trained. They have already won the 1st round, and now we are planning not to fall behind in other rounds. Our students are great! They have won quite many awards in the last few months and have become the winners of the World Student Championship! We hope to win the Regional Championship as well”, says senior coach of the SUSU Basketball Team Yuriy Sokolov.

On January 25, at 13:00 the South Ural State University team will play with the Satka basketball team. We invite everyone to cheer for the SUSU students at the SUSU Educational and Sports Complex at 62 Soni Krivoy St. The entrance is free.