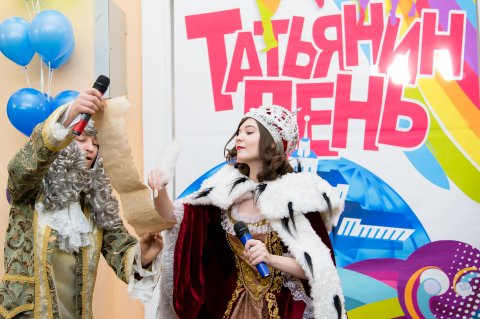 South Ural State University will be traditionally celebrating Tatiana Day on January 24. As tradition demands, the Rector of the university will grant three wishes of students.

The holiday was named after Saint Tatiana of Rome: Tatiana Day. By the way, the ancient name “Tatiana” in Greek means “organizer”. Saint Tatiana is considered to be the patron saint of students. On January 25, 1755, Empress Elizabeth of Russia (known as Empress Elizaveta Petrovna) endorsed Ivan Shuvalov’s petition and signed a decree on the opening of the Moscow University, which became one of the centres of the Russian advanced culture and the social thought in Russia.

Nowadays, students celebrate this holiday with great pleasure. On January 25, 2005, it was officially approved by the Decree of the President of Russia “On the Day of Russian Students”.

The celebration of Students’ Day will take place in 2nd-floor foyer of the SUSU Main Building on January 24 at 13:00. The program will include theatrical prologue from the actors of the Deep Vision dance theatre and actors from Mannequin Theatre Studio, who will play the roles of Empress Elizabeth of Russia and Count Shuvalov. As part of the event, the competitions between SUSU students, as well as directors of schools and institutes of the university will be held. International students will also congratulate the university on the holiday and present flowers to all Tatianas. The creative teams of the SUSU Recreation Centre, such as Primavera, SUSU Ballroom Dancing Group, L-classic team and more, will brighten up the program with their vivid performances.

On the occasion of Tatiana Day, Aleksandr Shestakov, SUSU Rector, will traditionally grant three wishes of students. Each SUSU student can write about his/her dream to the Rector on the university’s web-site, in the Ask a Question section, as well as in VKontante social network in I Love SUSU official group. Requests are to be submitted till January 20.

These requests may contain suggestions on improving the educational process, the organisation of events of the university, improving the living conditions in the campus and developing students’ opportunities in extracurricular activities.

All letters will be reviewed by the Expert Council headed by the Rector. The most burning and important requests will be selected. During the celebration of the event, Aleksandr Shestakov will announce three wishes of students to be granted.