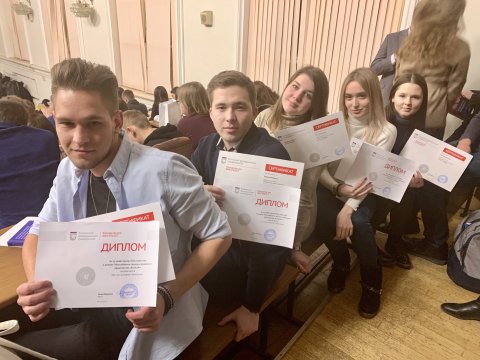 Students of South Ural State University took part in the 1st Youth Ecology-and-law Practicum, EcoLaw, which was held at the Faculty of Law of Kazan Federal University.

SUSU was represented by students of group Ю-340 from the Department of Business, Competition and Ecological Law of the SUSU Institute of Law Marsel Galimov, Ekaterina Liakhu, Dmitry Maslov, Elena Morzhitskaya, Natalya Salova, as well as by the Department’s senior lecturer Ekaterina Kovalenko.

As part of this practicum, the students attended lectures and masterclasses by practicing lawyers, as well as by legal experts from Kazan Federal University, Lomonosov Moscow State University, and other universities.

Among the event’s goals was to hold an Eco Hackathon. All of the students participating in the practicum were divided into 7 mixed groups and had to prepare project presentations on a legal solution of an ecological problem.

The group, which included SUSU students among others, took the 1st place and was awarded a certificate for the Best Eco Hackathon Project. The students suggested to carry out a “plastic reform” implying the replacement of common plastics with biodegradable ones. They elaborated a complex approach, including the re-equipment of the existing productions based on the mechanisms of public-private partnership through implementing the technology of creating disposable tableware made of starch, which was developed by SUSU scientists, along with stimulating manufacturers by granting them tax exemptions, as well as attracting agricultural manufacturers in order to supply starch for the industry. The students also were granted a right to publish their article in KAZAN UNIVERSITY LAW REVIEW journal.

All the participants of the 1st Youth Ecology-and-law Practicum EcoLaw were awarded individual certificates.

Our congratulations to the students on this victory; may they be as successful in their further creative and professional activities!

Author and photo by Elena Zinchenko