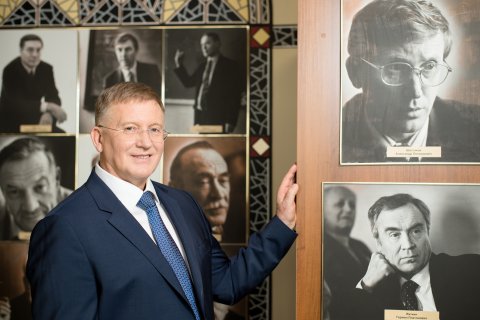 South Ural State University continues to successfully advance in international educational and scientific space. Its positions in the list of Russian universities, participating in the 5-100 Competitiveness Enhancement Program and in other authoritative national and international rankings are constantly improving.

How is it possible to stay on the cutting edge of progress? What is behind the confident answers to the challenges of the times? Aleksandr Shestakov, SUSU Rector, Doctor of Sciences (Engineering), reveals the secrets of success.

– The university is conducting serious research activities in cooperation with international scientists. Please, tell us about the collaboration with colleagues from other countries.

– One of the development vectors of South Ural State University is a mutually beneficial collaboration with international scientists. Collaborations increase the effectiveness of scientific work. Highly-qualified scientists cooperate with us. They do not concentrate on narrow subjects, but work in progressive directions. Such collaboration helps us to move forward confidently.

Over 2018-2019, the university’s scientists together with international colleagues have published more than 830 articles in leading world journals, which are included in the Scopus database. An illustrative example of this are the successful works by Andrey Epimakhov, Doctor of Sciences (History), who published two top-level articles on archaeology in Nature and Science scientific journals. The research results were obtained in collaboration with the Institute of History and Archaeology of the Ural Branch of the Russian Academy of Sciences, and partners from Germany, England and other countries.

There are also examples of very good engineering works. One of such works in the field of additive technologies was conducted by us together with the specialists of Saint Etienne University, France, and academician Valentin Gapontsev’s IPG Photonics company (the world leader in industrial lasers field), in response to the needs of KONAR Industrial Group, which is a successful manufacturer of import-substituting equipment for our oil and gas complex. The company manufactures high power engines with engine shafts weighing from 300 kilogrammes. Due to the collaboration, a thorough strengthening of the shaft engine was made, what increased its reliability.

– Does SUSU still have a technical bias, or the interest has shifted towards humanitarian specialties now?

– SUSU has become a multi-purpose university. All technical fields that existed have been maintained. We have developed a natural sciences block: mathematics, physics, chemistry. And the humanitarian block, which was developed during the Perestroika period, has been maintained as well. On the one hand, the universal approach complicates the managing process, since there are too many fields of activity. But, on the other hand, there is an opportunity to work on cross-disciplinary projects. Today, it is namely the perspective cross-disciplinary projects that show main results. The university is a structure that helps to fulfil those effectively.

Let me give you an example. Last year a new goal was set: to assess the city’s ecological state. So the measurements from the pipes of polluting enterprises are being taken. We put together a team, consisting of mathematicians, physicists, chemists and programmers. This team, in quite a short period of time, designed a software product, which has no analogues in our country. There is a couple of international analogues though, that allow to assess a city’s state of air in a real-time mode.

We conducted an experiment, in which Rosprirodnadzor laboratory took part. Our research data and the results of measurements obtained in the laboratory coincided. During his visit to SUSU, Andrew Cundy, Professor of Southampton University, Great Britain, said that the software product is of great interest and its use is possible in England, where there are similar problems. That is the result of serious cross-disciplinary work that was initiated by Magnitogorsk Iron and Steel Works. We presented the project at a conference in Kazan, and now we have an industrial partner represented by the Almentyevsk authorities. The city is situated in the oil-producing Region of Tatarstan. The municipality is interested in the air basin state within a hundred-kilometre zone.

– Is graduate employment tracked? Are there any statistics and successful examples?

– Of course. Even during the Perestroika ("restructuring" in Russian) period, when everything was obscure, the distribution of graduates was carried out. And it is carried out now as well. For example, last year 92 percent of full-time graduate students at SUSU got employed due to the distribution. We keep in touch with employers. Moreover, we created a system for assessing the quality of training of graduates and distributed it to universities in federal districts. We conduct a survey among employers. They rate our graduates 4.5 out of 5.

There is a program called SUSU Top 500. It presents portfolios of the most successful students. Here academic records, leadership and organizational skills are reflected. Our employers have a choice. It is also significant that our graduates grow in their careers and often occupy key positions, especially in those companies whose activities are related to projects and developments.

Technology is changing rapidly, knowledge is becoming obsolete. Young people who have gained university skills in working with computer technologies and software products that provide high-level design are very much in demand. They build successful careers in construction and engineering organisations.

– And in terms of gender, who of the graduates is more successful?

– In fact, men are more successful. Women who graduated from the university still have priorities in marriage and family. But as practice shows, a female leader is no worse, and often better than a male one. So, for example, Inna Beldeiko graduated from the university with a degree in Industrial and Civil Construction in 1993. For 12 years she was working at OOO UralAZ Project, climbing up from an engineer to a chief specialist in the Department of Architecture and Construction. She was engaged in the design of industrial buildings for KamAZ, Ashinsk Metallurgical Plant, and Ural Automobile Plant. Currently, she works in the Uralmetallurg-4 Construction Holding as the Head of the Design Department, which deals with the calculation and design of structures for individual large-panel residential houses of Betotek firm.

– Tell us about the achievements of the university? What makes it unique?

– There are a lot of achievements! We have been doing supercomputing for 20 years now. We have created the world's first industrial water-cooled supercomputer. In 2012, we were invited to an exhibition in Hamburg. The first position was then taken by the Japanese supercomputer Fujitsu. And it should be noted that its node was one and a half times larger than the node of our supercomputer.

It was a shock! During the Perestroika, the electronic industry collapsed, foreign journalists wrote that Russia was left behind the West in this direction ... forever. And suddenly it turned out that our country was demonstrating such a result. Our supercomputer was exclusively Russian-made. It was created by the RSK SKIF Company in cooperation with the Institute of Software Systems named after A.K. Aylamazyan of the Russian Academy of Sciences. As a result of this work, in fact, the world's first fully-cooled industrial supercomputer appeared, and it turned out to be effective. The packing density of electronic components and performance were one and a half times higher than those of the Japanese supercomputer.

– What goal does the university set today?

– We set the goal of promotion in the Competitiveness Enhancement Programme 5-100. We have decided on the strategy. The key fields of the SUSU development are Digital Industry, Materials Science and Ecology. All these fields are very important for the region and for Russia as a whole. In the field of the digital industry, we intend to become champions in our country, and in materials science and ecology – prize-winners. It is necessary to achieve such a level that SUSU would become a well-known university in the international educational and scientific space, which is reckoned with in the world, so that our graduates can find work not only in our region and in our country, but also abroad. By the way, now many of our graduates are working abroad and are achieving great success there.

– I would very much like that in 10 years the plans that I have shared today will be implemented. There are all prerequisites for this. South Ural State University is the development driver of our region. Emerson Corporation, the world leader in automation and the ideologist of the digital industry, created a global engineering centre in Chelyabinsk thanks to cooperation with SUSU, built a plant here in 2015, and now the second stage is under construction. This is a US investment neither in oil, nor in gas, nor in wood, but in high technology. It is a great merit of our university that the investor has chosen Chelyabinsk. The corporation has invested about $600,000 in its development. President of Emerson Michael Train is Chairman of the SUSU's International Scientific Council. We have extensive joint plans related to the development of the digital industry.

Time is rushing forward, and our university is always confidently responding to its challenges. So it was in the difficult times of the Great Patriotic War, in the post-war years, during the years of Perestroika. And this is happening now due to the fact that the university is able to move fast. I really like the phrase from Through the Looking Glass by Lewis Carroll, which sounds like "... it takes all the running you can do, to keep in the same place. If you want to get somewhere else, you must run at least twice as fast as that!" And it seems to me that we are succeeding in it.