"Around the World": SUSU Association of International Students Held Classes for Schoolchildren 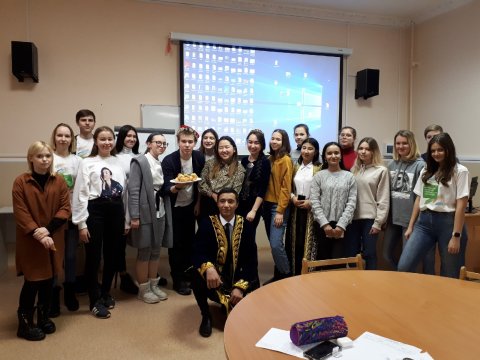 International students of South Ural State University conducted an interactive program called Around the World for pupils of the 9th, 10th, and 11th forms from schools of the city of Chelyabinsk.

More than 2,500 students from 54 countries study at SUSU. All of them are grateful to Chelyabinsk, which provided them with the opportunity to obtain higher education and meet new friends. In this regard, in the autumn of 2019, in cooperation with the Junior Academy of the Institute of Linguistics and International Communications and its leader Iuliia Poliakova, an interactive program called Around the World was launched under which international students from different countries are to introduce Chelyabinsk schoolchildren to their culture and traditions. In October, students from Sri Lanka made a presentation of their country, and so did students from China in November.

"It was a great opportunity for us to present the cultural diversity of our university and invite pupils to get higher education at SUSU. The future students in their turn will have the opportunity to gain knowledge not only in classes, but simply by communicating with the students in different languages," says Uvindu Wijeweera, President of the South Ural Association of International Students.

This time a lesson was given for high school seniors by representatives of the CIS: Kazakhstan, Uzbekistan, Kyrgyzstan and Turkmenistan. International students made a big presentation about their native land, treated schoolchildren to national dishes, and presented national costumes. According to the organizers, the CIS countries are relatively close to Russia, but their cultures are different. That is why it was important to introduce the children to Asian countries and present their local flavours.

"Such programmes are very important for us. This is an opportunity to show your culture, talk about your country. We want to convey the idea that we are all open to friendship. Although we have different nations, religions and worldviews, there is one thing we have in common, and this is what always brings us together − a desire to develop," said student from Turkmenistan Gulnara Khodzhieva.

During the lesson, the children had the opportunity to ask international students all questions of interest. The pupils asked why foreigners chose Chelyabinsk to obtain their education, what was difficult for them in a new culture, and what troubles they had in writing and speaking. Some schoolchildren had already visited the CIS countries, so they talked about their experience and impressions. At the end of the meeting, the schoolchildren and international students sang songs in Russian and took a memory photo.