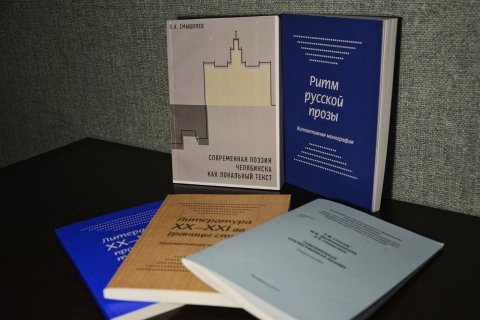 In 2019, a series of unique scientific and educational books was published at the Department of Russian Language and Literature.

The literary school of the Institute of Media, Social Sciences and Humanities is one of the youngest and most prominent scientific schools of SUSU. The innovative approach of the academic staff of the Department of Russian Language and Literature to the problems of modern literary studies complies with world scientific trends and creates a serious basis for obtaining significant results in the training system for future philologists. The subjects of the five published scientific books reflect the main vectors of the department’s strategic fields: the study of regional science, modern literature, the rhythm of prose, and the phenomenon of literary visualization.

In the composite monographs entitled Literature of the 20th - 21st Centuries: the Boundaries of Style and Literature of the 20th - 21st Centuries: Literary Work, Text, and Style, on which the entire staff of the department worked, innovative aspects of the study of the phenomenon of style are presented (the study of visual features; the study of style features of modern regional literature; comprehension of rhythmic and stylistic categories), unique learning material on the adequate transmission of the stylistic originality of a poetic text at translation is proposed.

The composite work by Tatiana Semyan, Elena Kanishcheva, Elena Fedorova entitled The Rhythm of Russian Prose is the result of longstanding work and is dedicated to the specific phenomenon of the rhythm of fictional prose in the creative activity of writers of the late 19th century, beginning and end of the 20th century, that is, almost over the century of the existence of literature.

Evgeniy Smyshlyaev’s monograph entitled Modern Poetry of Chelyabinsk as a Local Text is the first monograph in Russian science devoted to modern poetry of Chelyabinsk. The paper was published with the support of the Russian Science Foundation as part of its grant called “Poet and Poetry in the Post-Historical Era”.

The key task for the philologists is to find such productive theoretical models that will be further applied in educational practice. Thus, the sphere of scientific interests of Tatiana Semyan and Evgeniy Smyshlyaev includes regional literature. Currently, both teachers are in charge of the digital educational project of the department called Virtual Museum of South Ural Writers.

The material of the published books complies with world scientific trends and confirms the high scientific potential of the Department of Russian Language and Literature.