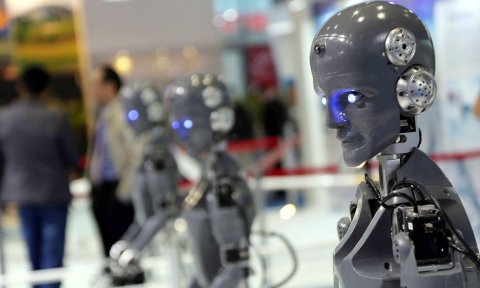 A team of scientists from South Ural State University has designed a hybrid intelligence algorithm aimed at earning money in financial markets. This project won in UMNIK, an all-Russian youth innovative projects competition on development of the IT-ecosystem being created by Sberbank within the framework of projects complying with promising “cross-cutting” technologies under the Digital Economy of the Russian Federation national program.

What Is Hybrid Intelligence?

Imagine sorting out ten most successful traders and analysing their forecasts on euro-dollar rates in the coming hours. Nine out of ten will most likely “say” that the rate will go up; and that is what is called collective intelligence, an intelligence based on collective thinking though these people may not know each other. And what if we analyse their opinions once again, but this time we use machine learning; then that is what is called hybrid intelligence, which produces one aggregated and well-considered signal to buy or sell.

Hybrid intelligence is a mixture of artificial intelligence and collective human intelligence. If we consider every human brain as a processor, then the greater the processor’s power and the amount of such processors working on one and the same task, the better and faster they will find the solution.

Who Is Already Using Developments in Collective Intelligence Sphere?

Collective intelligence is already being used by major worldwide hedge funds. At the same time, many funds are already using machine control in technical aspects management in both the trading itself and risk management.

How Was the Idea Born?

Aleksandr Dolgov, a 1st-year part-time student of the SUSU School of Electronic Engineering and Computer Science, speaks about the idea: “Not so long ago I’ve started to take interest in financial markets, and, from a computer programmer’s point of view, I started thinking about the automation of the bidding process and without wasting much time on analysis. I involved Aleksey Smirnov, Head of the IT Department of the SUSU Institute of Sport, Tourism and Service, in the working process, since he had already had successful experience in creating collective intelligence in terms of sports forecasts. He suggested the idea of making price forecasts according not to fundamental and technical analysis, but to people’ opinions in social media on the Internet.

And we started to scan the Internet. Quite soon we understood that one server was not enough. After that we bought one more server, and then yet another one. Right now we have 5 high-performance servers scanning about 400 thousand active traders on a daily basis. Automated metrics are being created, and selection of candidates on different financial instruments is being conducted, all in an automatic mode. As a result, our system consumes more than 150 gigabytes of traffic per month. And we spend only about 2 hours of our time per day on supporting this system.

The system started to show first results 2 months after the start. On average, each currency pair made profit amounting to more than 200 percent per month. We handed over the obtained data for verification to Ilya Tetin, Associate Professor of the SUSU Department of Economic Security, and he acknowledged the results. Now we are working together on designing a more complex algorithm, also covering financial news headlines, which affect the change in the price of financial assets. Currently, the maximum initiated total collective profit of the system is more than 18 thousand percent per year.”

A mentor from Sberbank is assigned to each winner of the UMNIK-SBERBANK competition. The project participants from SUSU have already got in touch with their mentors and have discussed possible ways of collaboration. In the near future the scientists are planning to create an Internet resource on the SUSU hosting basis for the free testing of the algorithm for all parties concerned.