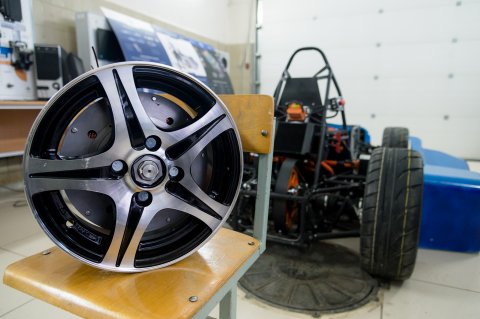 Students and staff of the SUSU Institute of Engineering and Technology are working on a wheel hub motor, a unique electric transmission for hybrid and electric vehicles. This work has been performed for two years within the project-based learning.

The main objective of the project-based learning is to train high-qualified specialists for the leading Russian companies. This task can be performed provided the students are involved into work on innovative and high-tech projects within the educational process. The design of a wheel hub motor for an electric race car is one of these projects.

“The work on the project was as close to the real production process as possible. The students from the elite training group were given Design Specifications, which included all basic parameters and characteristics of a wheel hub motor. Then all necessary electromagnetic and heat calculations were performed. While completing the task, the students learned to use the latest CAD systems of our Computer Centre. A digital twin of the real wheel hub motor was made, and its research was performed.

To test the assembling of the complex product, a large-scale plastic model was made with the help of 3D printer. At the second stage, the students worked on design drafting. The drawings were put into production. We had little time and very limited financial resources, as in the real production. The circumstances did not allow us to make gross errors and pass to the second cycle of prototyping.

The assembly of a wheel hub motor was successful and without any difficulties. Now we have a real prototype, which is being prepared for testing. At the final stage, the students will have to develop care and maintenance documents, as it is done at the enterprises of electric machinery industry. I believe that our graduates with such scientific and practice-oriented training will be provided by the employers with good working positions and a prospect of fast career growth. An Electric Race Car is a new innovation project that students have been working on as part of “Formula Student” annual engineering competitions,” says the Head of the Department of Electrical Engineering of the Faculty of Energy and Power Engineering, the Institute of Engineering and Technology, Doctor of Sciences (Engineering) Sergey Gandzha.

The innovative wheel hub motor has reduced the dimensions of the electronic control system a lot and made it possible to place the entire power electric part in a disс. This arrangement of all components leaves the engine room for energy storage and enhances driver comfort.

“The main task we face is to bring the innovative idea to mass production. We plan to transfer our developments to an industrial partner. Today the main role of a scientist is to generate, test and sell an idea; and professional manufacturers should carry out its implementation,” says Sergey Gandzha.

The innovation of the project has already been confirmed by the Russian Federation patent for design of a combined field excitation valve motor.

It should be mentioned that one of the most critical components for the developed transmission is a planetary reduction gearbox. The complexity of its development was in the fact that it should have been built into the dimensions of the wheel disc and the valve electrical motor. Several options for the layout of the gearbox were considered. The most successful version was a planetary gearbox with a two-crowned satellite, proposed by the professor of the Department of Wheeled and Tracked Vehicles, Doctor of sciences (Engineering), Sergey Kondakov. The analysis of such gearbox was jointly carried out with the fifth-year student of the Department of Wheeled and Tracked Vehicles Alexey Larin. A 3D model was built; and according to the results an article was published in the SUSU Bulletin (Series Mechanical Engineering No.2, 2019).

The project was led by a team of engineers represented by the students of Automobile and Transport Engineering Faculty, Faculty of Power and Electric Engineering, the Department of Journalism, Advertising and Public Relations, School of Economics and Management. It was the combination of different disciplines and profiles that gave a positive result.

Before starting work on a project, the students had intense basic training in Mathematics, Physics, Theory of the Resolution of Invention-Related Tasks, English, Economics. At the second stage, the students studied major subjects to master Ansys Electroniсs Desktop, Ansys Electroniсs Citrix, Solidworks and Kompas programs. These programs are the main tools for research.

A postgraduate student of Department of Electrical Engineering of the Faculty of Power and Electric Engineering Ivan Chuyduk, a member of elite training group, has been working on the development of a wheel hub motor for an electric race car from the very beginning. This high-tech project has become the basis for his Candidate’s thesis.

“We were given design specifications from the Student Design Bureau. In the process of the project implementation we went through all the cycles of the real production, mastering the latest CAD systems. Those skills helped me to find an interesting job at modern JSC “Russian Electric Motors” with a good salary and employment benefits. Now a full-scale prototype is assembled and ready for bench testing. Then we will work on the installation of a wheel into an electric race car.”

The project education of the elite training group continues. Work on the project is planned to be completed by May 2020 by the Bachelor’s degree students’ graduation time.

One should mention that testing of a new wheel hub motor electric race car model is planned in September at the All-Russian Round of Racing Competitions in Moscow. The car will also be ready for exhibition show in Tyumen. In addition, the car will take part in “Formula Student” engineering competitions, where the best racing cars assembled by students of world universities are presented.