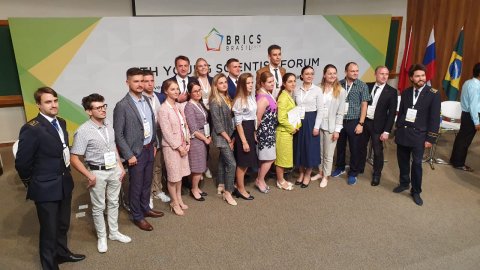 The forum was organized by the BRICS Innovation Promotion Fund. The event is held annually in the country where the BRICS summit takes place. The forum is a platform for the development of cooperation of talented young people (under 40 years old) from the BRICS countries engaged in science, technology and innovation. The key goals of the forum are the formation of new young scientific groups in the field of research and development, the fostering of interdisciplinary communication, the exchange of information on the possibilities of scientific mobility, internships and the career growth of researchers and scientists in the BRICS countries.

At the forum, Russia was represented by 20 young scientists from universities in Vladivostok, Gatchina, Ekaterinburg, Kaliningrad, Moscow, Rostov-on-Don, St. Petersburg, Sevastopol, Tyumen, Ulyanovsk, Khabarovsk and Chelyabinsk. The delegation was appointed by the Ministry of Education and Science of Russia according to the results of the competitive selection of young scientists from all over our country.

"The members for the delegation from Russia were chosen by the Ministry of Education of the Russian Federation, which conducted a competitive selection on the BRICS themes chosen in the beginning of the year: Cybersecurity and Bioeconomy. The university submitted an application in the field of cybersecurity, it was accepted, and I was invited to Rio de Janeiro, where I made a report on the Information Security Research and Education Centre," said Andrey Barinov. "Other guests also presented overview reports on their activities. We had similar topics with the Saint-Petersburg Mining University."

This year the Forum program’s motto was: "Promoting the Partnership of Young Scientists and Innovators in the Framework of Long-term Cooperation in Science, Technology and Innovation". The Forum consisted of two parallel sessions in the thematic fields of Cybersecurity and Bioeconomy. In the end of the forum, participants were awarded certificates of participation, and following the results of the session, a report was made that was included in the general report on the BRICS summits held this year.

The next, fifth BRICS Young Scientist Forum will be held from September 7 to September 11, 2020 in Chelyabinsk as part of the Russian Chairmanship in the BRICS Inter-State Association.

The Information Security Research and Education Centre (REC) was founded in conjunction with Kaspersky Lab. The REC work includes two fields of activity: science and education.

APCSs are automation systems for factories, workshops and electric power industry. The REC works with industrial process control systems with a focus on the specifics of the region, which is metallurgy. In this area, the Centre has a partner enterprise ChelPipe, with which an agreement was signed on project-based training of students from the Department of Information Security of the School of Electronic Engineering and Computer Science and from the Department of Mechatronics and Automation of the Institute of Engineering and Technology. The second scientific direction, Cybersecurity Systems of Connected Vehicles, started about a year and a half ago at the Information Security Research and Education Centre and is now conducting activities for the future. At the moment, collaboration with PAO KamAZ is under way to test the technologies.

Educational activity of the REC is represented by the development of online courses in conjunction with Kaspersky Lab and the introduction of Kaspersky OS technologies, the secure operating system of Kaspersky Lab for embedded devices, into the educational process. In addition, the Centre plans to open Master's programmes.

Kaspersky Lab regularly monitors its academic partners, and SUSU is currently in the TOP 5 among more than 20 partner universities in the world. The basis for evaluating the indicator are activities such as preparing joint online courses, holding competitions for students, and other events.