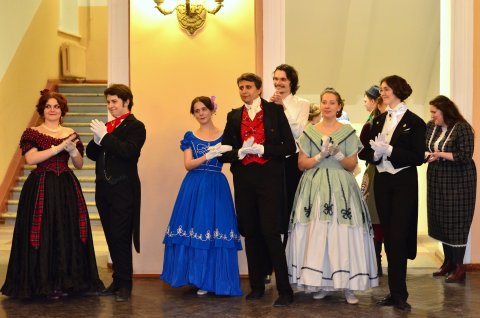 South Ural State University hosted the 1st round of the 3d All-Russian Historical Dance Competition. “Gattaca” vintage interest club was the organizer of the event.

A great number of participants from different Russian cities are engaged in the event annually. This year the competitions are held in a new format: 2 more preliminary rounds, where the participants should demonstrate their skills, will be held before the finals in May.

“Social dancing did not initially imply a “competition” format. However, at present it is a possibility to show the beauty of historic dances. We are showing those dances that people danced at balls in the 19th century. The competition is an aspect of the people’s individual work, which changes them physically and spiritually,” says the head of “Gattaca” vintage interest club Dmitriy Khan.

According to Dmitriy, many dances of the past influenced contemporary dances. If you do not know the basics of historical dances, you will not be able to develop in modern choreography in a competent way.

This year the participants have been divided into two categories: professionals and amateurs. In total, 11 pairs from different Russian cities took part in the competitions. By the results of the selection, the following participants became the finalists:

1st place in the “Profi” nomination was awarded to the couple of Dmitriy Chernov (head of guitar players studio of the Recreation Centre) and Nataliia Shibaeva (SUSU graduate);

2nd place in the “Profi” nomination was awarded to Dmitriy Yudintsev (Master’s degree student of the Institute of Natural Sciences and Mathematics).

“I’m glad that the competitions in the Ural region have started to take place in the same way as in France. All the participants are well prepared and demonstrate high skills in the final. Personally, I was satisfied with the first round and hope that the next round will be interesting as well. We are planning to invite the administration of the city and the region, as well as the judges from France for the final in May.”

One should mention that the partner of the competitions is the Historical Dance Association “Carnet de Bals”, France.