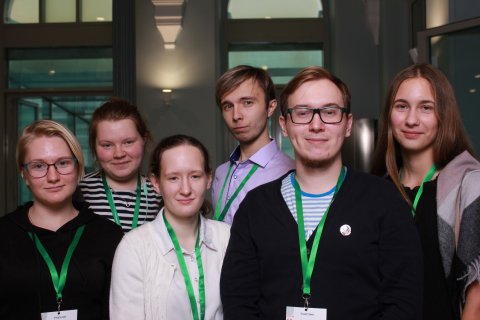 The Tenth International Natural Sciences Tournament was held in Saint Petersburg. It is a team competition between students from European universities solving scientific problems in physics, chemistry and biology, which are usually published beforehand.

The tournament was held in several rounds. As a result of selective competitions the “Young’s Modulus” team reached the quarterfinals wining over the teams of Peter the Great St. Petersburg Polytechnic University, V.I. Vernadsky Crimean Federal University, Immanuel Kant Baltic Federal University, St. Petersburg University, Voronezh State University, etc. In the course of the selective competition, our team presented solutions to the problems of glacial melting and gene delivery into the cells of patients with epidermolysis bullosa. A plastic decomposition mechanism without the formation of toxic compounds and a modern experimental scientific kit for children were introduced at the competition.

In the semifinals, during the competition to reach the finals the team competed in a difficult section and met the teams from Novosibirsk State University; Skoltech; and Taras Shevchenko National University of Kyiv, Ukraine; Phasics S.A., France; and St. Petersburg University. Within the scientific battle, the Werteks company presented a task to verify the beneficial properties of hydrogen water. The company rated the team’s solution as the best and awarded them.

Unfortunately, the team was not able to reach the final, but received certificates for individual championship:

Finally, by the results of the tournament the team was awarded with the pass to the 10th International Natural Science Tournament, which will be held in Warsaw, Poland, in February 2020.

Author and photo by Aleksey Popov