SUSU and UNESCO to Publish Russian Edition Textbook on Fact-Checking 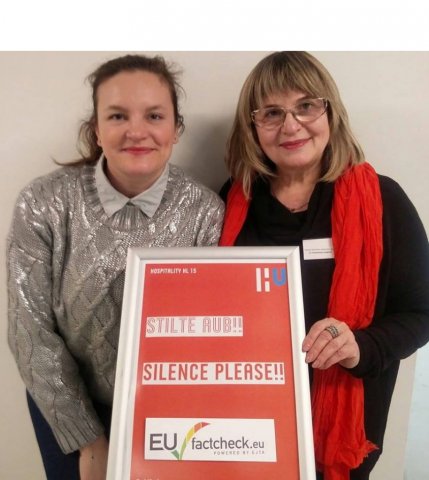 The Department of Journalism, Advertising and Public Relations of the Institute of Media, Social Sciences and Humanities of SUSU jointly with UNESCO (the United Nations Educational, Scientific and Cultural Organization), are to publish a Russian edition textbook on Journalism, “Fake News” and Disinformation for academic and professional training of journalists within the frameworks of the Fact-Checking and Verification course.

A new course was developed especially for Master’s students studying in the innovative programme on Transmedia Journalism, based on an international journalistic project EUfactcheck. The project is dedicated to the problem of information checking organization in an international media space and methods of teaching a new generation of journalists this process. The Master’s students of the SUSU Department of Journalism, Advertising and Public Relations, together with universities in Belgium, Finland, Spain, Greece, Sweden, Holland, are actively studying international and interdisciplinary methods of fact-checking and information verification under the project-based learning.

“We didn’t only learn various aspects of the current problem with fake news, but also gained real experience of working with fact-checking tools,” says Liudmila Shesterkina, Head of the project, Head of the Department of Journalism, Advertising and Public Relations, Doctor of Sciences (Philology). ”We personally met one of the authors of the fact-checking textbook Julie Posetti, held talks with UNESCO, and made accommodations on publishing this textbook for Russian-speaking audience under the aegis of UNESCO and SUSU at the training session of EUfactcheck project fulfilment at the Institute for Media, Utrecht, the Netherlands.”

The textbook consists of 7 modules including both theoretical and practical parts for developing fact-checking skills and working with sources and content, as well as examples from journalistic practice. Anna Krasavina, Associate Professor of the Department of Journalism, Advertising and Public Relations, Candidate of Sciences (Philology) was the translator of the textbook on Journalism, “Fake News” and Disinformation.

“The textbook touches upon the key problems of modern journalism and media,” says Anna Krasavina. “For example, transformational processes in media, journalists credibility, fight against disinformation, medialiteracy, content verification in social media, and attempts for discrediting journalists. While working on the Russian edition, Elena Khakimova, Professor and Doctor of Sciences (Philology), acted as a literary editor, and Tatiana Guseva, Head of the Training Laboratory of the Department of Journalism, Advertising and Public Relations, did the typesetting.”

The online version of the Russian edition textbook on Journalism, “Fake News” and Disinformation for academic and professional training of journalists is displayed on UNESCO web-site and SUSU web-site in the section Projects by the Institute of Social Sciences and Humanities. In December, the textbook will be released with a circulation of 100 copies, specially for the SUSU Scientific Library.