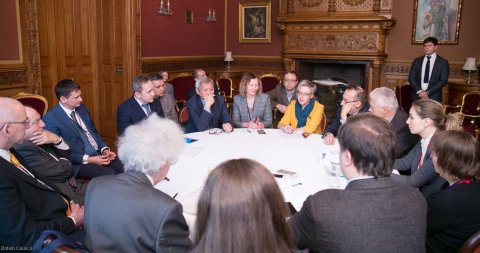 The First Russia-UK University Rectors Forum was held at Lomonosov Moscow State University. About 100 rectors and representatives of British and Russian universities took part in it, and South Ural State University was represented by Оlga Yaroshenko, the Vice-Rector for International Relations.

The forum was organized, on the British part, by the Embassy of the United Kingdom in Moscow, the Association of Commonwealth Universities and the British Council, and on the Russian side, by the Russian Rectors’ Union. The event was held at the Consulate in Moscow.

The main topic of the event was the development of scientific and educational collaboration between Russian and UK universities. The parties signed an agreement on collaboration between the Russian Rectors’ Union and the Association of Commonwealth Universities. The participants of the forum expressed general intention to increase the number of British students studying at Russian universities in exchange programs.

“SUSU took part in the Russia-UK University Rectors Forum for the first time. We received an invitation from the British Consulate General Yekaterinburg and from Richard Dewell, who is a friend of our university. The purpose of the visit was to show the heads of British universities the quality of Russian universities, latest trends in the development of science and technical research, forms of cooperation, and the development of mobility programs and an opportunity of co-financing from the Russian part” said Olga Yaroshenko.

The forum represented reports in four sections, where such topics as mobility, joint scientific research and publications, double degrees and the expansion of cooperation between universities and the industry were discussed. Based on the results of the visit, a roadmap representing the development of the university for the next three years is planned to be compiled. The organisers invited the SUSU representative to take part in the Second Russia-UK University Rectors Forum in summer 2020, and Aleksandr Shestakov, the Rector, is preliminary included in the list of participants.

The Vice-Rector for International Relations expressed hope that the speech given at the beginning of the meeting by Sir Laurie Bristow, the British Ambassador to the Russian Federation, will be a step towards the fulfilment of intentions expressed by the heads of universities of both countries.

“Despite quite a complicated political situation between our countries, all the speakers emphasized the fact that education and interests of students are beyond politics. We really hope the agreements reached will be expanded further,” said Olga Yaroshenko. “The university takes active part in the British Council projects, that is why we think that it is possible to invite delegations from British universities and discuss the prospects of the cooperation development. We are already fruitfully collaborating with University of Southampton, with Professor Andrew Cundy in particular, who is highly recognized not only at UK universities, but also at universities in Europe.”

Professor Cundy is one of the world’s leading specialists in the field of ecology, Director for Internationalization of the Ocean and Earth Science Society of the National Oceanography Centre, Southampton, UK. This year the scientist became a new member of the SUSU International Scientific Council and the head of the ecology field of research in our university.

According to the Vice-Rector for International Relations, the cooperation with Andrew Cundy is an important example of the development of international relations with the United Kingdom, because it broadens horizons for the university. Thanks to the assistance of the scientist, a joint scientific conference on ecological issues will be held at SUSU in 2020, and will become a foundation for fruitful work in the future.