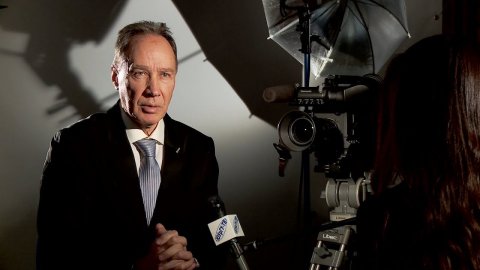 Today is the World Television Day. South Ural State University is of direct relevance to this holiday. The university has a powerful media outlet in its arsenal. A SUSU-TV television and radio broadcasting company celebrates its 15th anniversary this year. Director of the SUSU-TV broadcasting company Sergei Gordienko spoke about its foundation and how broadcasting is carried out nowadays.

How was the SUSU-TV broadcasting company founded and what are the main principles of the media outlet policy?

The SUSU-TV began its activity in December 2004 as a training studio for student television and radio broadcasting and at the same time as a professional television and radio channel. The broadcasting company became one of the first divisions of SUSU created in the digital coordinate system. And today, during the period of SUSU’s active transition to being a university of digital transformations, the television company is confidently positioning itself in the digital information space.

The process of production of media products and broadcasting of the SUSU-TV broadcasting company were originally based on the abandonment of analogue video formats, such as VHS, SVHS, Betacam SP, and the development of digital multimedia technologies. Digital technologies are characterized by the unification of a complex information environment (text, sound, graphics, photos, videos) in a homogeneous digital representation of data, simplicity of processing the most complex and voluminous information, and possibility of reliable and durable storage of large volumes of information.

How many TV and radio spots have been prepared over the years of existence of the SUSU-TV broadcasting company?

For a decade and a half of the existence of the SUSU-TV university's television and radio company, more than 15,000 TV and radio spots, and news items on the scientific, innovative, educational, cultural, social, international activities of SUSU have been broadcast on television and radio, via cable systems and have been published on the Internet. Within the last five years alone, according to the strategic initiatives of the SUSU Project 5-100 roadmap for the competitiveness enhancement among the major research-and-education centres, more than 600 television news stories have been prepared at the broadcasting company. More than 250 interviews with leading world-class scientists, about 120 image-building videos and video films about the activities of the SUSU research and educational centres, leading departments, and international laboratories have been televised.

How is broadcasting on SUSU-TV is carried out today?

A local area computer network that combines all video editing computers and broadcast servers has been deployed at the SUSU-TV broadcasting company. Digitizing video materials from film or copying video materials from memory cards, recording off-screen texts in the form of computer files, editing in Adobe Premiere Pro program are ordinary processing operations implemented at individual workstations of employees of the broadcasting company. Finished stories and programs are transferred over the local network to on-air computers without intermediate media.

The process of television spot broadcasting is fully automated: two broadcast servers based on high-performance computers and Forward FD-322 boards are used to organize television broadcasting. The software installed on them allows continuous 24-hour broadcasting. The functions of the staff are reduced to writing or adjusting the playlist that delivers the necessary files in the right sequence and at the right time.

The storage of finished spots and news items on a specialized archive server is organized. Video spots are stored in Full HD format, which allows, if necessary, to use them for editing and broadcasting without loss of time for digitization or conversion.

The SUSU-TV channel live webcast is carried out from the SUSU server in the form of a window on the university’s official website https://www.susu.ru/ru, where any user of the global network can watch Novosti YuUrGU (SUSU News) and other online television programs at any time.

The SUSU-TV broadcasting company has its personal channel on the popular YouTube video hosting service, which hosts all television content. This allows to significantly expand the audience and increase the number of video views.

To broadcast live meetings of the university's administration with future applicants and their parents during the Open House Day in order to demonstrate the maximum openness of other significant events held at the university, a special network was installed by the SUSU-TV broadcasting company that allows television signal to be transmitted via cable from the event venue to the broadcasting studio. From here, simultaneous online broadcasting is conducted to the SUSU cable network, to the websites of the university and television and radio companies, to YouTube video hosting, and to the VKontakte social network.

What opportunities does the broadcasting company provide to the SUSU students?

Training of specialists in the conditions of real digital informational media production on the basis of the SUSU-TV broadcasting company assumes particular importance in the present-day educational process, when the organization of project training for students prevails. Project training on the basis of the SUSU-TV broadcasting company allows students to master research skills during real university media production, promotes creativity and logical thinking, brings together knowledge gained during the educational process, and helps be good at social issues. The students’ project activities at the SUSU-TV broadcasting company aim at integrating and applying the knowledge and skills acquired during the study of various disciplines in the framework of journalism education.

Here are the main television programs of the SUSU-TV included in project-based learning.

Novosti YuUrGU (SUSU News) is a daily news program. First of all, the most significant events from the life of the university, as well as events of urban, regional, and sometimes all-Russian significance, which are associated with the problems of youth and affect its interests, are highlighted. The Novosti YuUrGU release lasts 20 minutes. The news program is the record holder of the channel, it has over 1,500 releases on its account.

The motto of the news service is “News That You Can Use”. The program is focused on positive, active, interesting and successful people.

Dlia Vas, Abiturienty! (For You, Applicants!) telethon is an eight-hour multi-component annual live television show. Broadcasting is carried out in a live television by the students of the Department of Journalism and Mass Communication and the staff of the broadcasting company. During eight hours, broadcasters and correspondents are getting acquainted TV audience with SUSU.

Tabula Rasa (“clean board” as translated from Latin) is a scientific television magazine, which is a unique project of the SUSU-TV university's television company, working on which students of the Department of Journalism and Mass Communications popularize the results of scientific research in various fields. Student authors talk about the achievements of world science, the inventions and discoveries of researchers and scientists of SUSU, and also explain everyday phenomena from a scientific point of view.

What are the merits of the SUSU-TV broadcasting company?

In 2016, the SUSU-TV broadcasting company won the TEFI television competition and received Student TEFI, a special prize from the Academy of Russian Television Foundation for the contribution to the development of professional education in the field of television. Thus, SUSU takes another step in training and meeting the needs of the modern media space by the specialists who possess a high culture, deep knowledge, and serious practical training for qualified work in the media system. It also opens up new horizons for the fulfilment of the university’s mission stated in the Project 5-100, which is the creation and application of scientific knowledge and training of a new generation of leaders capable of solving global tasks on sustainable development. The formation of student socially active and positive life attitude, the desire for education, science, business career, success in life, positioning SUSU as a regional, federal and world centre of science, education, culture and sport. All these are the main tasks for improving elite and project-based learning systems, improving the quality of training for future media industry professionals. These tasks are daily solved in the editorial offices of the SUSU-TV broadcasting company.

As part of the celebration of the 15th anniversary, the broadcasting company holds a creative competition, called SUSU-TV in Transmedia Broadcast. The competition provides an opportunity not only to increase students' interest in creativity in the field of transmedia journalism, but also to select the best student work in the field of university journalism for the year of 2019. Students of all SUSU institutes and schools can compete in the following nominations: Best Video, Best Radio Spot, Best Text Material, Best Photo, and Best Convergent Material about SUSU-TV.

The winner will be announced on December 20 at the gala meeting and will be awarded with a special prize from SUSU-TV. We should note that applications for the competition can be sent until December 10 to the official mail of the broadcasting company: yuurgu.tv[at]mail[dot]ru.