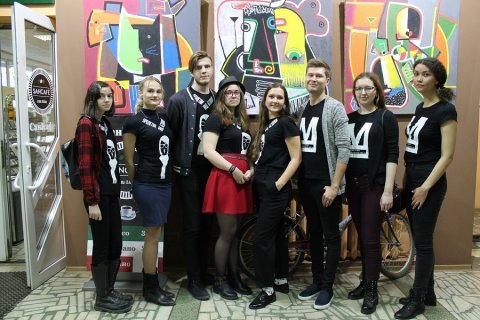 Master’s students of the Department of Russian Language and Literature held a lesson dedicated to the digital education project “Virtual Museum of South Ural Writers”.

In the beginning of November, Chelyabinsk Lyceum 11 invited the team of the Virtual Museum of South Ural Writers to participate in Media Day in honour of the twentieth anniversary of Peremenka newspaper. The editors of Peremenka are constant partners of the Department of Russian Language and Literature and take part in annual academic projects: the Akuly PeRa (News Tribe) business games and Philological Games.

Second-year Master’s students from SUSU held a lesson on media literacy for upperclassmen. Speaking on the virtual museum, Master’s students of group 215 (Arina Medvedeva, Marina Chernykh and Artem Shilintsev) showed the students the algorithm for creating their project.

From the lesson, the upperclassmen learned what project-based education is, and what prospects it can offer. Information about how to form a start-up, gather a team, set goals, and successfully develop your project made a big impression on the school students.

The Master’s students illustrated the new information for the school students using concrete examples. The most impressive example was the Google Arts project and the Street View system. Using these digital platforms, the school students “visited” the Van Gogh Museum. The Master’s students offered the pupils not just interactive lessons, but also a concrete search algorithm, explained how to get on to the site, how to find the necessary information, and how to see the advantages of these museums over “offline” analogues.

During the presentation of their digital project, the Master’s students spoke about the possible platforms for its application and about plans for developing the Digital Museum of South Ural Writers. The upperclassmen were most impressed by the 360-degree panoramic photos of the offices of writers Nikolay Godina and Yanis Grants. After the school students completed their virtual tour of the spaces, in which the authors create their poems, they listened to information about the poetry with more interest. Many of the students admitted that they had not interested in modern South Ural writers before, but after this interesting presentation, they will follow new publications on the page of the virtual museum on VKontakte.

According to the project manager, Head of the Department of Russian Language and Literature, Doctor of Sciences (Philology), Professor Tatiana Semyan: “The Materials of the Virtual Museum of South Ural Writers digital educational project will soon become a necessary methodological tool for teaching modern literature. Through digital technologies, the virtual museum makes it possible to get to know the life and work of current regional authors at school or university classes, what develops interest in reading even among the digital generation, the so-called generation Z, which is accustomed to using tablets, virtual reality, and other modern technologies. Therefore, our virtual museum fully corresponds to the current trends of the existence of modern culture."