More Than 150 International Students Will Be Studying Russian at SUSU 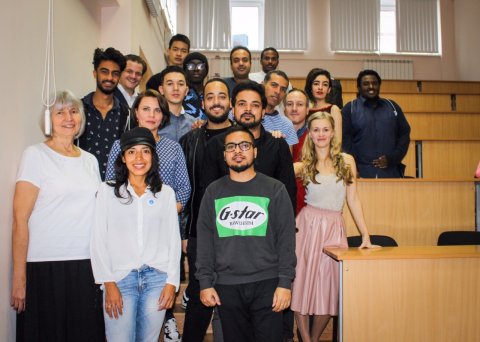 The matriculation ceremony of the Department of Russian as a Foreign Language for students from China, Egypt, Iraq, Iran, India, Morocco, Zimbabwe, America and many other countries, was held at South Ural State University. The students will be studying Russian for a whole year.

The matriculation ceremony is a start of a new stage in life of anyone who wants to study Russian. For international students this means a new country, new friends, language, culture, new life in Russia.

“Sigma Education Building is our big home, where you can always find many students from different countries. When we organize such events we wish to tell the students that they are no aliens, they are a part of our large family. The matriculation ceremony gives the students a boost for a whole academic year,” says Irina Kislova, a teacher of the Department of Russian as a Foreign Language.

Irina Kislova noted, that some people, who applied for SUSU, have not arrived at the university yet. That is why, the number of students studying at the Department of Russian as a Foreign Language may increase by the end of the year.

At an unofficial part of the event, the international students were completing creative tasks. According to organizers, these events help people unite and bond. During the year, they will be facing some different life situations, they will have to learn to come to agreement and work together.

At the end of the event, an event-packed concert was held, where the freshmen performed their creative numbers. A few weeks before the event, the students were given a task: to make a showpiece about their group. Each group needed to stage their showpiece in a certain form: as a fairy tale, dance, pantomime, song, a game with the audience, flashmob, or video. All participants performed successfully and were happy with their work.

A guest from Lebanon, Rony, just like his parents, has been speaking Russian since he was a child. He applied for SUSU to get a degree in the sphere of hotel business. He likes to travel and has a dream of becoming a manager in a hotel.

“I found information about your university on the Internet. I liked it a lot, the educational programme seemed to me interesting enough and suitable. What caught my eye was that the university is swiftly developing and tries to become the best among the others. I enjoy being here, all the people are really nice. It's just wonderful here!”

Throughout the year students will be studying Russian. Specialized subjects will be added in the second semester, with consideration to the profession the students want to have in the future.

Alice, a guest from China, wants to become a teacher of the Russian language. In order to achieve this goal, she applied for South Ural State University.

“In China, I am studying in the “Russian and Chinese Interpreter” specialty. I was studying Russian for about two years in my homeland, but now I have come to Chelyabinsk to study it at South Ural State University.”

The event was organized by the Department of Russian as a Foreign Language together with the Sociocultural Adaptation Centre. The Department would like to thank volunteers and teachers, who took part in the organization of the event.