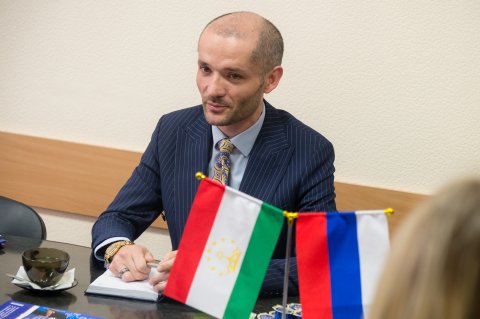 For the first time, South Ural State University was visited by the Acting Consul General of the Republic of Tajikistan Yusufdzhon Nabiev. During the visit, meetings were held with the leadership of the SUSU departments and with students.

Our university has vast experience in working with the Republic of Tajikistan and is determined to continue to develop this partnership. Olga Yaroshenko, Vice-Rector for International Relations, noted that we have great results in attracting students from Tajikistan and that SUSU graduates, upon returning to their homeland, achieve great successes.

“At present, SUSU has students from 52 countries, but the Republic of Tajikistan is one of the leading neighbouring countries in this regard: right now we have 272 Tajik students studying in all forms of education – Bachelor's, Master's, and postgraduate studies. We have cooperation agreements with 14 universities in Tajikistan, including with Tajik Technical University named after academic M.S. Osimi, where we even organize on-site entrance tests for applicants. Speaking about the results of our partnership, we must mention our common pride: two graduates of SUSU postgraduate programmes, who returned to their homeland, received the prestigious prizes of the President of Tajikistan for their contribution to science."

The Acting Consul General of Tajikistan learned about the execution of scientific partnership, including the activities of 14 research and teaching staff members from the Republic, among whom there are engineering researchers, associate professors, and researchers.

Meetings were also held with representatives of the university’s subdivisions, which actively work with international partners. Head of the SUSU Pushkin Institute Research, Education and Coordination Centre Yadviga Berezovskaya spoke about the development of the partner network in China. Within this large project, 9 Pushkin Institute centres were created in China, working on the popularization of the Russian language around the world. The centres' staff offer organisational methodological help to university professors and lecturers in China: continuing education courses are organized for those who teach Russian or separate disciplines in Russian. The Pushkin Institute Research, Education and Coordination Centre also offers in-person and distance contests in various fields, including those related to a very important field for the university – digitalization. The Consulate General was offered to consider the opportunity to organize a network of centres in Tajikistan.

Head of the Department of Russian as a Foreign Language of the Institute of Linguistics and International Communications Elena Kharchenko presented promising academic programmes: training Russian as a Foreign Language teachers in Bachelor’s, Master’s, and post graduate programmes, as well as Russian courses for international students. She noted that it is possible to bring international students into projects, where they can create their own Russian language courses, for example for native Tajik speakers. But the most important thing is that SUSU offers students support in their studies in the adaptation stage.

“Our department helps international students both with sociocultural and academic adaptation. We work with the teachers and explain methods which are created for international students, because it’s very important for students to understand the lectures and successfully study within their chosen programmes from the very beginning,” stressed Elena Kharchenko.

Director of the Research and Development Institute Uctech-Profi Educational Equipment Manufacturer Georgy Kalyagin gave a presentation and suggested that the participants discuss the prospects of production of educational equipment for universities in Tajikistan. Currently, the institute manufactures around 6,000 products in 60 different fields, including electrical engineering, agriculture, and much more.

During the visit, a meeting was held between the Acting Consul General of the Republic of Tajikistan in Yekaterinburg with students, which was also attended by Director of the Somoniyon Tajik National and Cultural Centre Islomuddin Radzhabov:

“South Ural State University has signed an agreement with the full assembly of peoples of the Chelyabinsk Region, and our public organisation is already a member of this assembly. Today’s meeting with the Acting Consul General of the Republic of Tajikistan in Yekaterinburg is very significant for us, as we have around 300 students from Tajikistan studying here. We hope that this will be a link between us for the integration and adaptation of students in the Chelyabinsk Region. Student years only happen once, so I want to tell our students that they should study as much as possible, earn a good education, and they will have good prospects. I wish for them to be successful.”

The introduction to the university was not limited to business meetings: Yusufdzhon Nabiev also visited the university’s laboratories and research centres, as well as the SUSU History Museum, so that he could personally appreciate the infrastructure and history of one of the leading universities in Russia. He noted that the General Consulate of the Republic of Tajikistan is open to all offers and hopes that the future partnership will be beneficial.