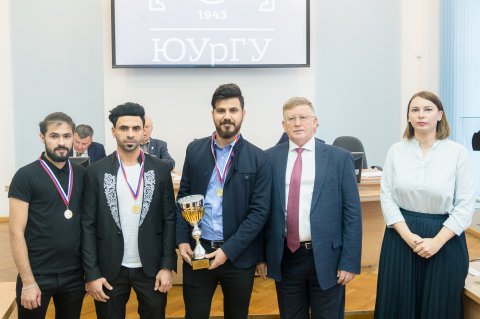 South Ural State University actively supports international students both in their educational-scientific pursuits and in extracurricular activities. Students from 52 countries from around the world are constantly engaged in various fields of activity, and sports holds a special place among them. SUSU Rector Aleksandr Shestakov has awarded students from Iraq for winning a Mini Football Championship.

For many years now, the mini football sports tournament is being held by the South Ural Association of International Students, which is functioning at our university. The competition is traditionally held twice a year: in autumn, among the teams made up of SUSU international students; and in spring, among international teams from different universities of Chelyabinsk.

In the championship held in September, four groups of participants were formed, in which competed: Africa and Tajikistan (group 1); Turkmenistan and Iraq; a combined team of the representatives of Arab countries, China and Uzbekistan; as well as Kyrgyzstan, Tajikistan (group 2) and Yemen. The competition was held during two days, and the teams from Iraq and Uzbekistan made it to the finals, where the first team became the winners scoring 2:0.

At the awarding ceremony, the university Rector noted that mini football is a relatively new sport for SUSU and wished further success to the international students in developing this sport.

The Iraq team captain Altby Abbas thanked the members of his team for the victory:

“All students from Iraq can play mini football, and we take part in this tournament every year. This year, all the teams were strong, but we still managed to win. I’d like to say thank you to the guys for doing their best to win, and it’s very important. For us, this tournament is like a World Cup among SUSU international students.”

The mini football tournament is held by the South Ural Association of International Students in order to involve international students in public life and provide them with the possibility to go in for favourite sports in comfortable conditions in their free time.

We remind you that you can learn more about the SUSU’s sports traditions among international students at a big-scale URAL FEST forum. November 14th through November 16th our university will hold events dedicated to the issues of education, culture, adaptation, sporting and creative activity of international students of the Ural Region universities.

The URAL FEST forum for international students and alumni will bring together people from different countries who have chosen Russian universities to obtain prestigious higher education. Experts from Moscow and the forum participants from Yekaterinburg, Chelyabinsk, Tyumen, Orenburg, Kurgan, Ufa, and other cities will discuss the specifics of studying and living of international students in the conditions new-for-them, the intercultural communication, efficient interaction between students, alumni and university, along with many other questions. Educational trainings, international excursions, cultural and entertainment, and sports events will be organized for the participants of the forum.