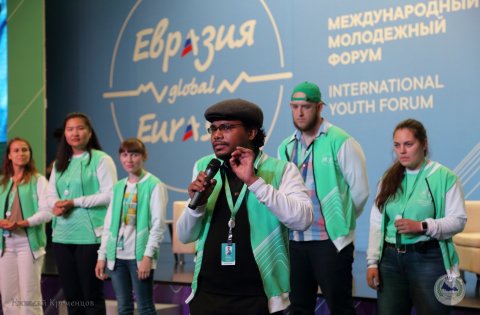 South Ural State University will be holding URAL FEST, the Ural forum of international students and alumni, November 14th through November 16th. The big-scale event is conducted in association with the South Ural Association of International Students functioning at SUSU. This event will bring together students and alumni from different countries, who have chosen Russian universities to gain prestigious higher education.

Experts from Moscow, as well as forum participants from Yekaterinburg, Chelyabinsk, Tyumen, Orenburg, Kurgan, Ufa and other cities will discuss specifics of training international students in the new-for-them living conditions, intercultural communication, effective cooperation between students, alumni, and the university, and many other questions.

One of the organizers of the contest is the President of the South Ural Association of International Students functioning at SUSU, Sri Lankan university student Uvindu Wijeweera. The project has received the grants support from the Federal Agency for Youth Affairs Rosmolodezh. He explained the idea of the forum:

“Now, there are about 700,000 international students, who study in Russia. In 2-3 years, there will be more than a million of them. Meanwhile, most international students prefer studying at Moscow, Saint Petersburg, and the nearby cities. Not so many students go to study in the Ural Region and Siberia. Most of them think it is cold and not so comfortable here. But everyone, who studies at the universities of these regions and districts, knows: there are certain opportunities here. For example, Chelyabinsk is a borderline between Europe, Asia, Siberia, and the Ural Region, and it neighbours the biggest country of the CIS, Kazakhstan. Now, Russia participates in the international project, the New Silk Road, and I think, that South Ural, Chelyabinsk could be part of it. Our idea is to draw attention to it. The forum will allow to establish cultural diplomacy, unite international students, and speak about the fact, that the Ural Region and Siberia are perfectly suitable for study.”

Uvindu also said, that many people ask him, why he had chosen Chelyabinsk in particular, and he wants all participants of the forum to get to know the capital of the South Ural Region, its traditions, culture, educational and economic opportunities. African, Asian and European students will take part in URAL FEST and will share their impressions and experience of living and studying at the Ural Region universities with the participants of the forum.

“There are excursions around the city, cultural, educational, and sports events in the program of the forum. We want international students and alumni participating in the forum, upon returning to their countries, to say they were in the Ural Region and, perhaps, their fellow citizens would get interested and choose the universities of the Ural Region, including SUSU, which is a very strong Russian university,” underlined the President of the South Ural AIS.

Also, within the framework of the forum, Uvindu will have a roundtable discussion for the representatives of the Association of International Students from different cities: Yekaterinburg, Tyumen, Kurgan, Orenburg, Perm, Omsk. The participants will discuss issues and problems, which international students in these cities face, and possible ways to solve those.