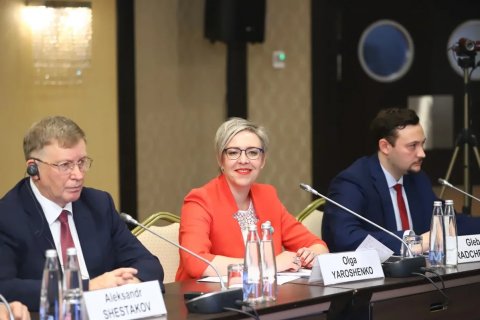 On October 24th through 26th, the twelfth meeting of the Russian Academic Excellence Council (the Council of Project 5-100) held among the world’s leading research and education centres took place in Moscow. In the course of the meeting, results of each university’s progress within programme 5-100 have been thoroughly analyzed. The key agenda of the Council meeting was the issues regarding the enhancement of global competitive ability of Russian higher education institutions in 2020 – 2024, and an extension of the validity of measures for government support.

As a reminder, the International Scientific Council is a constantly operating consultative body created to consider issues regarding the development of leading Russian universities. The Council includes foreign and Russian representatives of the academic community, public officials responsible for reformation in the sphere of education, and globally-recognized experts and researchers of higher education problems. Starting from 2013, 11 meetings of the Council have been held. Presently, the Chairman of the Council is Deputy Prime Minister of Russian Government Tatyana Golikova; Deputy Chairmen of the Council are the Minister of Science and Higher Education of the Russian Federation, Mikhail Kotyukov, and Research Supervisor of the Moscow School of Management SKOLKOVO, Andrey Volkov.

At the meeting, representatives of South Ural State University have successfully presented the university’s report on implementation of event plan for academic excellence programmes (the roadmaps) for 2018.

The team of those presenting the report on the results of programme 5-100’s implementation at SUSU included the Governor of the Chelyabinsk region, Aleksey Teksler, the Rector of SUSU, Doctor of Sciences (Engineering), Professor Aleksandr Shestakov, Director of the School of Electronic Engineering and Computer Science, Candidate of Sciences (Physics and Mathematics), Associate Professor Gleb Radchenko, Vice-Rector for International Relations, Candidate of Sciences (Pedagogy), Associate Professor Olga Yaroshenko, Head of the Research and Innovation Services, Anton Korzhov, Director of Project 5-100 Project Management Office, Evgenii Belousov, Head of the International Office's Academic Rankings Promotion department, Andrey Kocherov, and two invited experts: Professor, Doctor of Sciences, Philosophy Doctor, President and CEO of SMS Group Inc., USA Pino Tese, and Doctor of Sciences (Engineering), Professor at the University of Leuven (KU Leuven, Belgium), Stepan Lomov. As a reminder, SUSU has been taking part in the Programme since 2015.

Another topic that has been discussed at the meeting of the Council aside from defending the reports on implementation of the Project 5-100 roadmaps regarded preparation for competitive selection of leading universities of our country in 2020. Starting from 2021, these universities are going to get financial support targeted at enhancement of their global competitive ability.

Upon results of the Council’s meeting, recommendations on correction of the list of requirements applicable to the contest selection of universities in 2020 have been given. The selection is held in the frameworks of implementation of the Federal project entitled “Young Professionals”. Upon results of the contest, no less than 30 universities in no less than 10 constituents of the Russian Federation are going to get sponsorship. Addressing the rectors of universities participating in project 5-100, the Minister of Science and Higher Education of the Russian Federation Mikhail Kotyukov stressed the importance of governmental support for the process of Russian universities’ transformation into advanced research and development centres. The Minister specifically remarked that universities should develop principally new research directions.

Moreover, the Council recommended the Ministry of Science and Higher Education of the Russian Federation to keep providing governmental support to 21 universities taking part in Project 5-100 in 2020. At that, universities have been divided into three groups, each of which included seven universities.

“If compared to 2018, there are two serious changes that occurred in the first group, in our opinion: ITMO University moved from the 5th place up to the 2nd, and NSU descended from the 4th to the 7th place. The second group hasn’t got any serious changes. In the third group, SUSU has noticeably ascended, whereas SFU has moved downwards,” commented Tatyana Golikova.