Important Step in the Development of Innovations: University “Boiling Point” Opens at SUSU A university “Boiling Point” has opened at South Ural State University. This is a space for collective work on innovative projects and for holding educational and other socially-valuable events.

“Boiling Points” are being opened with support from the National Technology Initiative Platform (NTI Platform) Autonomous Nonprofit Organization. This work is being carried out on behalf of the Agency of Strategic Initiatives as part of the National Technology Initiative since 2014. These venues are designed for representatives of all spheres of activity that have an impact on the development of society. At “Boiling Points”, they can share their experience and work together on new projects and models for development of the Chelyabinsk Region.

“Today, 41 “Boiling Points” are being opened at Russian universities. Our task is to bring as many people as possible into the projects of the National Technology Initiative. A “Boiling Point” is a platform, where representatives of business, government authorities, social workers, students, and teachers get united, and where there is an opportunity to create a team, learn new things, and gain the support of more experienced individuals on developing projects,” says NTI Platform representative, Nikolai Lubyanov. Universities are being brought in to this project because they make a serious contribution to the development of innovations. The new venue will be in demand to promote priority projects and implement measures to improve the business environment. The opening ceremony of the university “Boiling Point” was attended by Deputy Governor of the Chelyabinsk Region Egor Kovalchuk, who stressed the importance of the participation of students in the development of society.

"I very much hope that the projects discussed at the “Boiling Point” will be interesting, relevant, and most importantly – executed. We all understand that any idea is good when it gets fulfilled. The “Boiling Points” system is really one of the ways to make technological breakthroughs by attracting young minds, enthusiastic young people, in this case – students from SUSU, and others. Here the status of the product or service can be elaborated – something that can truly be executed, made commercially profitable, and is right for the development of our country and the Chelyabinsk Region." 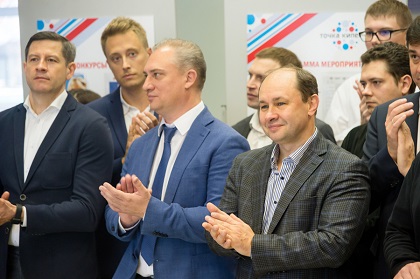 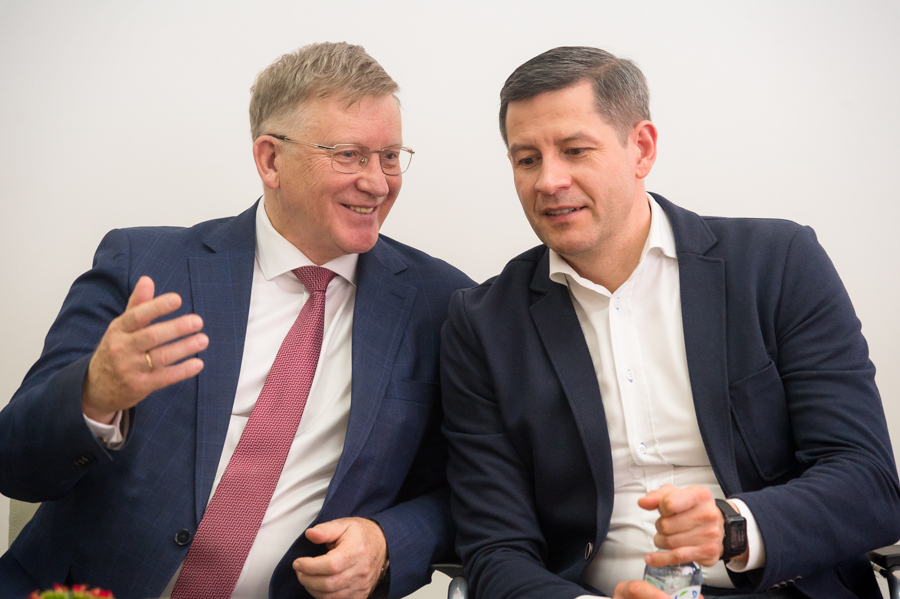 SUSU Rector Aleksandr Shestakov explained that our university has achieved serious results in scientific research, and now the university aims to make a breakthrough in innovation. Alexander Shestakov also outlined plans to expand opportunities for young innovators who will be involved in the projects discussed at the “Boiling Point”.

"The opening of the “Boiling Point” is an important step in the development of innovation. In this space, we, our students, postgraduates, professors, and teachers will generate new projects. The most important thing are ideas - if there are no ideas, then there is nothing to develop. We want these ideas to be fulfilled, and in the future, we will open laboratories where students will be able to realize them in iron, wood, plastic, or electronics and develop them into a laboratory sample. This is an important component of the university's work. And then, young innovators will be able to promote these ideas in our lives, society, and industry."

The first Chelyabinsk “Boiling Point” was opened at IT-Park. SUSU became the only university in the region to join the NTI Platform project. The Minister of Information Technologies and Communications of the Chelyabinsk Region Aleksandr Kozlov drew attention to the fact that “Boiling Points” create a new culture that combines education and modern technology.

"Chelyabinsk already has a “Boiling Point” at IT-Park; it is a successful project, the statistics of the meetings that are held at that location are good, and interesting speakers come to us. But it was very important to launch a “Boiling Point” at a university, because to use university spaces is a new proposal put forward by NTI Platform at the educational intensive course Ostrov 10-22, and SUSU was one of the first universities to have organized its “Boiling Point” in the shortest possible time." 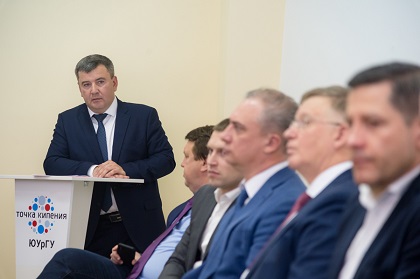 “On behalf of the Ministry of Education and Science of the Chelyabinsk Region, I congratulate everyone on this event. This is a unique space where students, business partners, and governmental structures can combine their interests together. Not so long ago, the Chelyabinsk Region has become a mentor region for the implementation of the Regional Standard of Personnel Support for Industrial Growth, and in just two weeks, we will be hosting 8 regions and sharing our experiences. So we have high hopes on this venue in particular, which fits in to this grand project.”

The first event held at the university “Boiling Point” was the plenary session on the topic of “Human Capital in the Age of Changes: the Place in the Strategic Development of the Region”. Representatives of regional government, the university, the WorldSkills Russia association, and leading companies in the IT sphere discussed the influence of society on the improvement of the Chelyabinsk Region.

In addition, presentations on the ecosystem of the Agency of Technological Initiatives, the development of technical creativity, the markets of the National Technology Initiative, and the prospects of continuing education were presented at the “Boiling Point”. Experts also discussed the goals of Smart City, the formation of skills of the future, and programs for innovative development. At the end of the opening program of the Boiling Point, a project session was held entitled “Autumn Marathon. Work of the Project Teams and Presentation of the First Results”.

The Agency of Strategic Initiatives is a non-profit organization created by the Russian government to implement a set of measures in the economic and social spheres. The National Technology Initiative is a program of measures for the formation of fundamentally new markets and the creation of conditions for the global technological leadership of Russia by 2035.