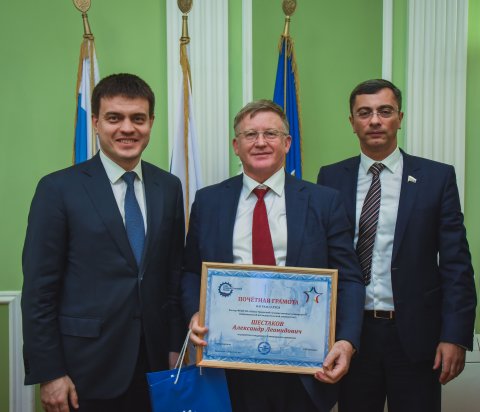 An all-Russian meeting on the problems of interaction between the employers and institutions of higher professional education in the framework of the Science National Project was held in Novocherkassk. SUSU Rector Aleksandr Shestakov took part in the forum and was awarded the Certificate of Honour.

The meeting was attended by the Minister of Science and Higher Education of the Russian Federation Mikhail Kotiukov, rectors of Russian universities, experts of the Russian Engineering Union and the State Duma deputies. They discussed the issues of improving the efficiency of engineering personnel training, the measures necessary for the implementation of the Science National Project, as well as the issues related to the organization and holding of Zvezda (Star) Multidisciplinary Engineering Olympiad.

According to Minister Mikhail Kotiukov, we need a system that would ensure, on the one hand, the creation of new Russian technologies, developments, products, goods, and, on the other hand, would significantly improve the quality of specialist training in the process of creating technologies.

Chairman of the State Duma Commission on legal support of the Russian Federation military-industrial complex organizations development, First Vice-President of the Russian Engineering Union Vladimir Gutenev noted that the topic of the meeting is very relevant both for the industry and the academic community.

The First Deputy Chairman of the State Duma Committee on Education and Science Gennadiy Onishchenko acquainted the meeting participants with the results of the research conducted among students of universities and colleges. There is a need for closer interaction between educational organizations and employers.

The rectors shared their experience in engineering personnel training amid global competition and under condition of high rates of obsolescence of technological solutions and equipment. Rector of South Ural State University, Chairman of the Organizing Committee of Zvezda (Star) Multidisciplinary Engineering Olympiad Aleksandr Shestakov participated in the plenary part of the meeting. He presented a report on the creation of a "social elevator" in the training of new engineering personnel on the example of SUSU.

The Minister of Science and Higher Education of Russia Mikhail Kotiukov awarded Alexander Shestakov the Certificate of Honour for the development and support of the students' Olympiad movement.