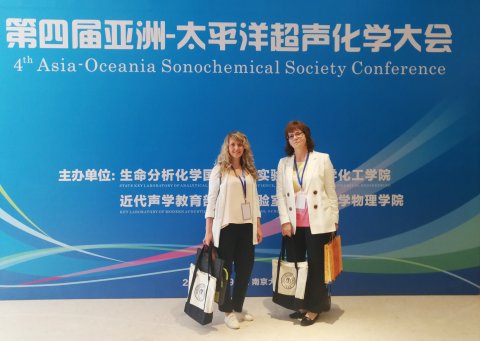 In September of 2019, the 4th meeting of the Asia-Oceania Sonochemical Society 2019 (AOSS-4) took place in Nanjing University of the city of Nanjing in China. The purpose of this meeting was to consider the latest accomplishments in the sphere of ultrasound and sonochemistry, and present the latest perspectives in this research area.

The Asia-Oceania Sonochemical Society (AOSS) has been established in 2013. The previous three meetings of AOS were held in Melbourne (2013), Kuala Lumpur (2015) and Chennai (2017). The purpose of AOSS-4 is to provide an international platform for academic presentations and discussions regarding ultrasound. The Asia-Oceania Sonochemical Society includes a number of countries listed in the alliance of SCO and BRICS. Participants from more than 20 countries and regions, including China, Australia, Japan, South Korea, the United Kingdom, Italy, India and Russia, took part in the Conference (AOSS-4 2019).

Presented at the meeting were scientific fundamental and applied research in various spheres. Acting as an invited lecturer, Irina Potoroko delivered a report entitled “Food Matrix: Increasing the Bioavailability of Nutrients by Using the Influence of Ultrasonic Micronisation”. Associate Professor at the Department of Food technology and Biotechnology, Irina Kalinina, had an internship at Nanjing University and took part in the Conference with a report entitled “Formation of Stable Ultrasound-assisted Nanoemulsions for Distribution in Food Matrix”.

“A huge amount of work has been done over the 4 years; a powerful association of scientists who share their research has been created. Researchers from France presented very interesting reports, particularly the report of Sergey Nikitenko from the Marcoule Institute, with whom we are going to cooperate in the future in order to open a joint laboratory. He conducts research in the sphere of the influence of cavitation effects on the process of water sonolysis,” said Professor Irina Potoroko.

One of the important aspects of the meeting is establishment of new academic contacts and the opportunity to discuss development of joint research in person.

“We had close contacts with Professor Erico Flores from Brazil, with whom we formed an application for a BRICS grant. We also communicated with the team from India headed by Professor Aniruddkha Bhalchandra Pandit, who is working on the issues of applied research in the sphere of sonochemistry. And we talked to Artur Cavaco-Paulo, a scientist from Portugal, who studies the issues of ultrasound application in biotechnological processes. These acquaintances are real opportunities to fulfill ourselves,” added Professor Irina Potoroko. “For my young researchers, I brought the contacts of a team from Japan supervised by Professor Naoya Enomoto; they are working on creation of biofilms, which correlates with our research direction.”

The majority of reports regarded the problem of water purification; this is a problem existing in India. New technical means applicable in such research have been presented.

All sessions were held from 8 a.m. till 7 p.m. according to a strict schedule; cultural programme provided the chance to communicate directly with representatives of other countries and universities and touch upon the Chinese culture during the farewell dinner.

Research articles will be written by the results of the Conference and published in Ultrasonics Sonochemistry top-rated journal included in the top-10 of Scopus database.

As announced at the Conference’s closing ceremony, the next 5th congress will be held in 2021 in Japan; the General Chairman will be Doctor Aniruddkha Bhalchandra Pandit, and Professor Muthupandian Ashokkumar will be the Co-chairman.