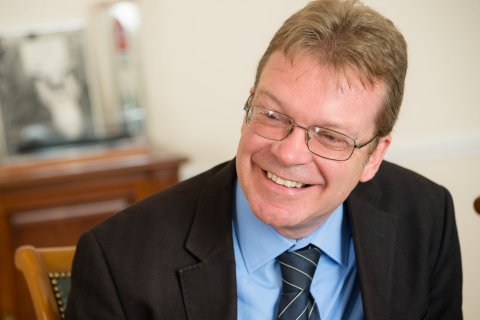 Doctor Andrew Cundy, Professor of University of Southampton, National Oceanography Centre, United Kingdom, has paid a visit to South Ural State University. Professor Cundy, who has become a member of the SUSU International Scientific Council in 2019, had an in-person meeting with the Council Board members and scientists of one of the major universities in Russia.

The key goal of the first official visit by Professor Cundy was the presentation of the SUSU’s scientific ecological projects, as he is a recognized world expert on the research related to environment protection and improvement. Ecology is one of the three crucial strategic fields of the SUSU’s development, which is topical not only for Chelyabinsk, but for the whole world as well. The university’s scientists are fulfilling innovative projects in several sub-fields at once, as was noted by the meeting moderator, Vice-Rector for Research Aleksandr Diakonov.

“In the course of the strategic meeting, we have discussed the ecological projects, which are being fulfilled at our university. First of all, the sub-fields of Clean Air; Clean Water; and Developing a Technology of Solid Waste Recycling. The value of the discussion for us is that Professor Andrew Cundy is one of the leading researchers and scientists in this field, and we would like to obtain an expert assessment of our research and determine the vectors for further development of the promising studies in ecology. We would like to specifically mention the Ecomonitor project, which started in the end of the last year. This project is currently being fulfilled jointly with Emerson. The prospects look good for the industrial implementation at a number of enterprises across the Russian Federation. The projects on recycling of solid domestic and industrial waste, and this especially refers to the metallurgy sector enterprises, have already been fulfilled for several year now, so we wanted to check how these could be developed with regard to modern requirements to ecological safety.” 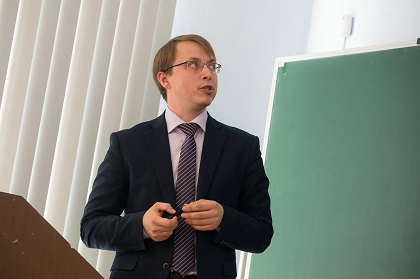 The Ecomonitor project is being fulfilled by the scientists of the Institute of Natural Sciences and Mathematics. According to Associate Professor of the Department of Applied Mathematics and Programming Dmitry Drozin, this project is a program based on a mathematical model, which allows industrial enterprises monitor the pollutants’ pathway on the territory of our region. The program’s pilot version has already been tested. It will allow the industrial “giants”, which are located both in the capital of the South Ural Region and in its other cities, to carry out real-time monitoring and even correct the ecological burden with consideration to the meteorological conditions.

“In the environment of Chelyabinsk, we register the presence of such substance as hydrogen fluoride; and every year Magnitogorsk is listed among the 10 cities, the air in which is polluted with such substances as benzapyrene and formaldehyde. The problem is that it’s not always possible to trance the source of the pollution. Our project aims at determining, exactly what (transport, an industrial enterprise, or for instance, a combined heat and power station) causes the pollution of the air with certain substances. Airborne contaminants are considered to be the most dangerous. Our project is very important for the Chelyabinsk Region, as the enterprises will be able to regulate their emissions themselves depending on the meteorological conditions,” noted the project participant, Associate Professor of the Department of Ecology and Chemical Engineering Tatiana Krupnova.

The Profession from the United Kingdom was very interested in a promising project on complex treatment of copper-smelting waste with the production of cast-iron grinding bodies and proppants, which is being fulfilled by the scientists of the Institute of Engineering and Technology under the supervision of Dean of the Faculty of Material Science and Metallurgical Technology Mikhail Ivanov. Within the frameworks of the Clean Water sub-field, Professor Andrew Cundy was presented a project related to environmentally friendly technologies of treatment of natural water and industrial effluents (supervised by Director of the Institute of Architecture and Construction Dmitrii Ulrikh); as well as a project on nonchemical cleaning of water off persistent organic pollutants, the work on which has been conducted by a group of researchers headed by Dean of the Faculty of Chemistry of the Institute of Natural Sciences and Mathematics Vyacheslav Avdin, for several years now.

The peculiarity of many of the SUSU’s scientific ecological projects is that these also solve the materials science tasks. Head of the Research Laboratory of Multiscale Modelling of Multi-Component Functional Materials, Professor of the Department of Theoretical and Applied Chemistry Ekaterina Bartashevich shared on several projects of the scientific team, which focus on the fundamental studying of the structure and properties of chemical compounds. The laboratory tries to pay much attention to solving the tasks arising at the intersection of chemistry, materials science and ecology.

“Despite that fact that our research is of deeply fundamental nature, we always pay much attention to the possibilities of using the obtained results in practice and try to connect these with the tasks of materials science and environment protection, which are most topical at the moment. In particular, I mean the reduction of the emissions of carbon dioxide, and the possibility of its recycling; designing new hybrid nanomaterials, made of both inorganic and organic components, as well as engineering new sorbing agents allowing for a more differentiated extraction of pesticides and some other organic pollutants dissolved in water. We perform structure modelling of chemical compounds, but at the same time we try to understand how the nature of chemical bonds and the structure-forming factors influence the physical and chemical properties of substances, the sorbing mechanisms, and chemical reaction rate.” 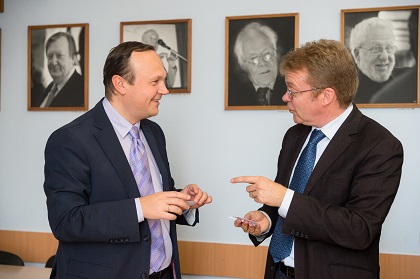 Denis Vinnik, Head of the Crystal Growth Laboratory of the Nanotechnology Research and Education Centre, Associate Professor of the SUSU Department of Materials Science, Physical and Chemical Properties of Materials, presented the possible solutions to ecological problems with the help of applied materials science, and in particular, when through the use of ferrites. In the end of the meeting, the SUSU scientists reported on the health risks caused by heavy metals, present in the roadside and domestic dust in the urban environment of Chelyabinsk, for instance (Tatiana Krupnova), as well as shared on the possibilities of using liquid crystals in environmentally friendly devices (Head of the SUSU International Laboratory of Molecular Electronics Fedor Podgornov).

Professor of University of Southampton, National Oceanography Centre noted: “I’ve watched many presentations today, and must say that I’m impressed: you have a strongly developed ecological field, meanwhile it involved research studies from different spheres. You have great potential. It is very important to be able to combine the best practices from different spheres of science in order to find solutions to ecological issues. You have wonderful material resources, and what is most important, you have excellent fundamental science. Su, SUSU has all the conditions to make this field even more successful.”

Professor Cundy also met with directors of the schools and institutes, deans of faculties and heads of research and education subdivisions, with whom he had detailed discussions on the projects and possibilities of their development.