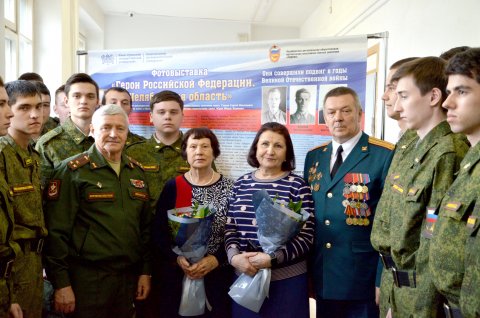 An opening ceremony of photo exhibition “Heroes of the Russian Federation. Chelyabinsk Region” was held at SUSU Military Training Centre. The event was organized by the Extracurricular Activities Department of the university and the Chelyabinsk Regional Organization of Combat Action Participants “Rodina”.

The exhibition was opened by Senior Inspector of the Extracurricular Activities Department, retired Colonel Yuriy Meshkov. He noted, that the photo exhibition and the lessons of courage are held within the framework of the Programme of Civic and Patriotic Education of SUSU Students on the occasion of forthcoming celebration of the 75th Anniversary of the Victory in the Great Patriotic War.

The exhibition narrates about combat actions and deeds of the heroes of war, who lived, studied, and worked on the territory of the Chelyabinsk Region. Sergey Sednev, Deputy Chairman of the Regional Council of Veterans, Chairman of the Council of Chelyabinsk Regional Organization of Combat Action Participants “Rodina”, retired Colonel, spoke about the main purpose of the exhibition:

“Today, the SUSU Military Training Centre opens an exhibition in honour of our compatriots, who were born, lived, served, studied, and worked on the territory of the Ural Region, and were awarded the honourable title of a Hero of the Russian Federation for their heroic deeds. By opening this exhibition we set a goal to narrate about our compatriots, who, being the heirs of Tankograd heroes, absorbed the best feelings of defenders of our Fatherland and showed them while accomplishing military and serving duties after the Great Patriotic War. The purpose of lessons of courage is patriotic education, promoting love to the home land, pride for the compatriots, readiness to protect our Fatherland.” 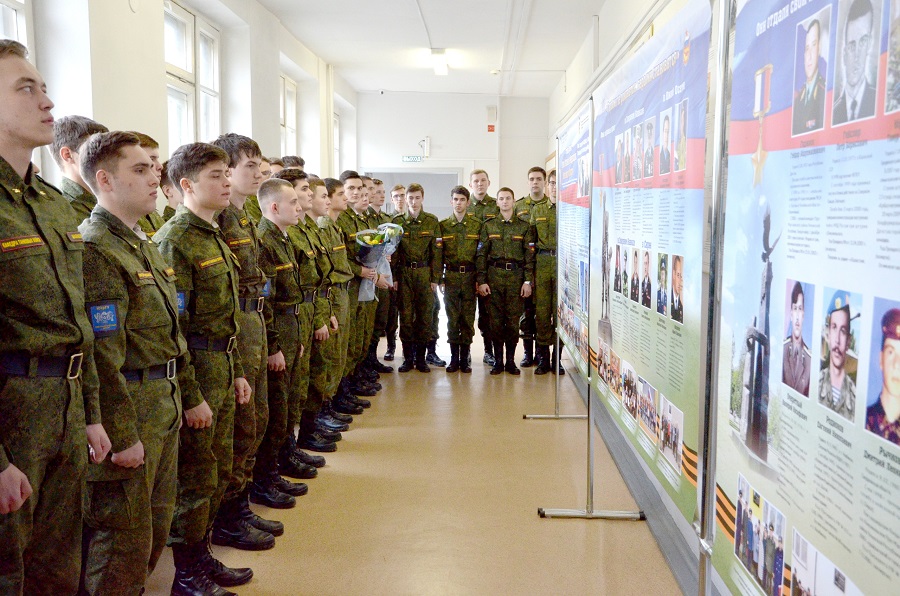 There were two guests present at the exhibition: widow of Hero Sergey Kislov, who died on the North Caucasus while being on military service, and mother of Hero Aleksandr Yakovlev, who died in the Chechen Republic. These women came to tell the younger generation about the people, who gave their lives for the good of their country.

“With the help of such exhibitions we raise the youth in a more patriotic way. This is really important, because our compatriots and the younger generation should know, that, back in the day, people on military service gave the most precious thing they had had, their lives, so that today, all the rest could live, study, and create in peace,” shared Svetlana Kislova, widow of the Hero of the Russian Federation.

The whole exhibition was divided into subgroups: the Great Patriotic War Heroes; the Heroes of North Caucasus, South Ossetia, and Syria; people who died heroically, people who were protecting home land from bandits and terrorists on the territory of North Caucasus; people, who made heroic deeds in space exploration and in everyday life. To date, we know about 39 heroes, who are South Ural residents. The exhibition displays showed the photos of heroes and gave a short description of their lives.

“I was greatly impressed by the photo exhibition. It has given an opportunity to see and understand, take a look at the heroic deeds of other people, who, without hesitation, were ready to sacrifice their lives in a difficult situation. It is very important for all of us, because patriotic education gave an opportunity to protect their home land,” said Аleksandr Коndratiev, a student of the Military Training Centre.

After the opening ceremony, the students of the Military Training Centre attended the lessons of courage. There, they were told about the heroic deeds of South Ural residents - the Heroes of the Russian Federation. At the end of the lessons they were shown a mini-film about all 39 heroes that we know of.