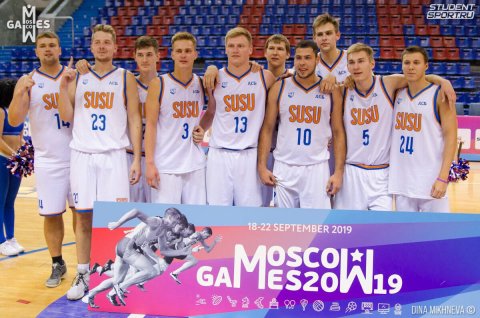 The V Festival of Student and Youth Sports Moscow Games-2019 concluded in Moscow. More than 2 thousand athletes from 14 countries took part in this competition and competed for medals in 14 sports. The team of South Ural State University students became victorious in men’s basketball tournament.

Moscow Games is an annual international festival of student and youth sports and one of the largest sporting events for students in Europe. It brings together amateur athletes from the CIS, Europe and other countries of the world. The "Moscow Games" festival has been held since 2014 and is under the patronage of the European University Sports Association (EUSA).

“I congratulate the athletes, the coaches and the Rector of SUSU, Aleksandr Shestakov, on the big victory,” commented the Minister of Sport of the Chelyabinsk region, Leonid Oder, on the success of South Ural’s basketball players. “Becoming the winner at such international festival is very difficult. I am glad that the largest-in-the-Urals higher education institution pays such a big attention to development of student sports.”

Let us also note that another team representing the Southern Urals, women’s volleyball team, took the second place. In the play-off match, the team yielded the championship to the RUDN team scoring 1:2.