SUSU Becomes Member of the University Alliance of the Silk Road 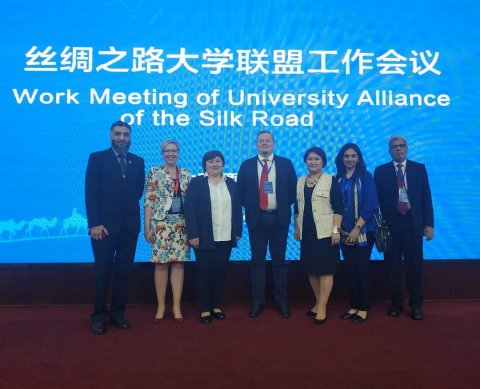 On September 19th, South Ural State University became member of the University Alliance of the Silk Road (UASR). Vice-Rector for International Relations Olga Yaroshenko took part in the UASR 2019 events, in the city of Xi’an of the People’s Republic of China, within the frameworks of which the membership of SUSU in this organisation was discussed.

The University Alliance of the Silk Road is a non-governmental and non-profit organisation aimed at openness and international cooperation in higher education between universities in the countries and regions, which are located along the Silk Road. The organisation was established following the initiative by Xi'an Jiaotong University and the Shaanxi Province authorities in May 2015, within the frameworks of fulfilling the One Belt, One Road project. This project was suggested by China and supported by Russia; and this initiative is supposed to help create new mechanisms of interregional partnership, strengthen economical, cultural and scientific ties between the countries in Eurasia, as well as facilitate peace and sustainable development.

Currently, the Alliance members comprise around 150 leading universities from around the world, with just 23 Russian universities thereof. The main reasons for the SUSU’s becoming a member of the UASR have become the development of interuniversity partnership with the Alliance member-universities and exchanging the experience of international collaboration and expanding the forms of interaction.

The SUSU Vice-Rector for International Relations took part in two important UASR events: 2019 UASR Presidents' Forum, and the Executive Council Meeting. Olga Yaroshenko delivered a report on the SUSU practices of internationalization and integration into the global research and education space, as well as held a presentation of our university as a potential Alliance member. The Executive Council Meeting held voting with consideration to each university being a potential candidate for becoming a UASR member. And with regard to SUSU, the decision was made unanimously in favour of it.

As the Alliance member, SUSU made several propositions on collaboration. Those included student active work within the projects of the SUSU’s Pushkin Institute Research, Education and Coordination Centre; ethnic and cultural summer school and an International Summer School on Asteroid Safety; fulfilment of joint educational programmes; participation of the Alliance member-universities in conferences organized by SUSU.

SUSU also expressed its readiness to collaborate in research projects, in particular, in strategic fields of the university’s development: digitalization, materials science, and ecology. In addition, collaboration in such fields as economics and management, social sciences and humanities, legal sciences, sports, and other adjacent fields, also looks promising.

We should note that SUSU had been invited to become member of University Alliance of the Silk Road by one of its university partners in China, Xi'an Jiaotong University, the agreement with which had been signed in China on May 12, 2019 within the frameworks of the 4th Silk Road International EXPO.

SUSU keeps actively developing its collaboration with universities and organisations in China. By the present moment, 86 agreements have been signed with the PRC universities, the SUSU’ academic staff and scientists are working with 40 Chinese partners. Today, over 500 students from China are studying at our university.