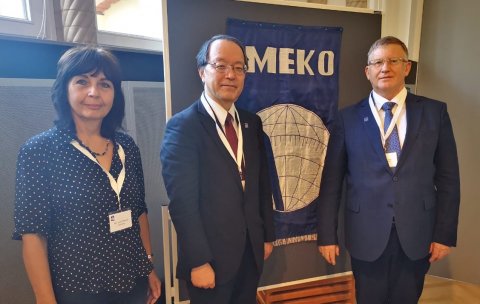 Rector of South Ural State University Aleksandr Shestakov has become the only representative of Russia in the General Council of the International Measurement Confederation (IMEKO).

This decision was announced in Berlin, where the Confederation’s General Council meeting was held. The fact that a representative of Russia has been included into the IMEKO General Council is an important event for our country, which has had no representatives in the Confederation’s governing authority for a long time. This event was preceded by a proposal, which Aleksandr Shestakov received simultaneously from Moscow and Saint Petersburg. Rector of South Ural State University gave his consent and became the head of the International Research and Engineering Society of Instrument Engineers and Metrologists of the Russian Federation.

The International Measurement Confederation comprises 25 different Technical Committees. The IMEKO General Council coordinates the issues on publications, holding congresses and symposiums in various fields. Having studied the achievements by Aleksandr Shestakov, the Council members reasoned that the SUSU Rector will be able to not only develop the field of metrology in our country, but also represent it abroad.

“This is the recognition of not just my achievements, but also those of SUSU. The first result of our joint activity in the General Council has become the decision to hold an international conference on digital industry under the aegis of IMEKO at SUSU,” comments Aleksandr Shestakov. “Last year, we became the first in our country who held a global scientific forum 2018 Global Smart Industry Conference. I would like to make this conference the major one in this field in Russia. We could hold it at South Ural State University once every two years. Next year, the global forum will be held under the aegis of the International Measurement Confederation. We will invite representatives of several IMEKO committees, so that we could hear different opinions in a range of various fields. This will provide us with new ideas for further development.”

There are two top journals on measuring equipment in the world, which are published in the USA and the United Kingdom. In the UK-published Measurement journal, the first place in the ranking of publication activity is occupied by China, the second place by India, the third place by Iran, which is further followed by Turkey, Italy, Egypt, Brazil... Russia is not represented there.

“This isn’t right,” Aleksandr Shestakov is confident. “We have the materials which could be published there. What we need is the publication activity. We need to position ourselves in a proper way, and make our publications in this field more reputable. At SUSU, the measuring instruments are being worked on by the physicists, as well as the scientists of the School of Electronic Engineering and Computer Science. Taking into consideration the tasks which we have set for ourselves, we will need to coordinate this work, so that our publications have more value and are rated higher by the international scientific community.”

It has become known that the IMEKO Congress, which will be held in Hamburg in 2024, will be considering the new scientific fields in measurement equipment: digitalization and Big Data, energy efficiency, environment and nanotechnologies, quantum computing and dynamic measurements.

“We are on the right way,” comments Aleksandr Shestakov. “A laboratory of quantum computing is functioning at SUSU, serious research is being conducted in the fields of measurement dynamics and energy efficiency, and work with Big Data is being carried out within the Digital Industry field. We do indeed work in the trending fields and will keep working even more actively. We will keep our focus on them and will move forward.”

SUSU has a glorious 75-year history and good traditions. From an Institute, which consisted of only two faculties, it has transformed to a national research university and a centre of scientific, educational, cultural and sports life, which is well-known in our country and across the world. South Ural State University is among the major multi-disciplinary universities in Russia.

Today, SUSU is a participant of the national 5-100 Project and acts as a unique platform for innovative developments. Being a successor in the best engineering traditions, our university has been developing dynamically while meeting the challenges of time. Our university is creating modern educational digital environment and implementing innovative ideas related to the global digitalization of the world industry.

Modern equipment resources and highly qualified academic staff ensure the high quality of professional training. Innovative technologies are being actively implemented into the research and educational process. Thanks to training international students and participating in international exchange programs, our university has become integrated into the world educational space.

SUSU is a SMART-university, the development strategy of which is based on digital transformation of the research and educational activity with the focus on collaboration with corporations being the world’s leaders in digital industry. SUSU is striving to make the university’s breakthrough achievements facilitate the efficiency of the industry of our region and our country, as well as to solve global tasks within Industry 4.0.