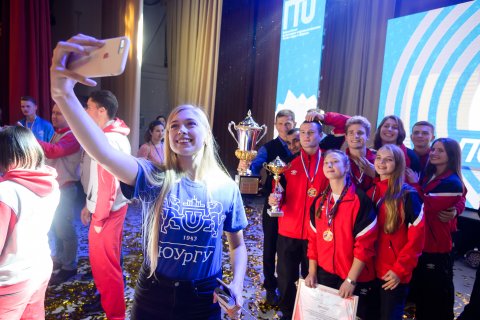 On the 23rd of September, ceremonious closing ceremony of the II All-Russian Student Festival “Ready for Labor and Defense” (GTO) took place at South Ural State University. Awards for the winners of the Festival were handed by the Minister of Sports of the Chelyabinsk region, Leonid Oder, the Head of the Department for GTO Complex Implementation, Aleksandr Karpov, and the SUSU Vice-Rector for Student Affairs, Vyacheslav Burmatov.

September 19th through 24th, about 200 students from all over the country were taking part in the II All-Russian Student GTO Festival. Chelyabinsk region was represented by the Ural Hawk team consisting of South Ural State University students. 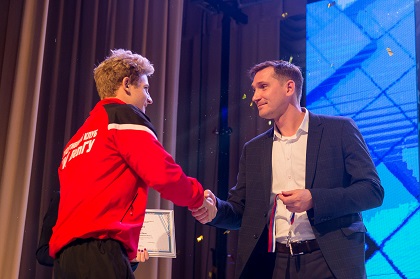 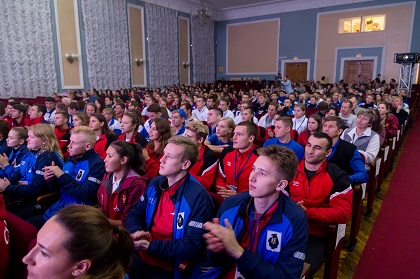 “The GTO complex had been revived in order to think about the future of the country, so that we had healthy strong people being born and raised, so that young people were well-developed both spiritually and physically. The GTO complex fits to fulfill this task as nothing else. It is not difficult but one needs to work hard in order to pass all the GTO tests and maintain one’s physical condition afterwards. GTO complex is important from the position of healthy lifestyle popularization as well. The most important here is all-around training: a man should perform well in running, shooting and jumping. In a word, a person must be proficient at everything, which makes this tests package to be so good,” noted Leonid Oder, the Minister of Sports of the Chelyabinsk region.

Head of the Department for GTO Complex Implementation, Aleksandr Karpov, addressed the participants with a welcoming speech from the main stage of South Ural State University.

“All of you worked hard and made us proud of your success and desire to win. Gathered in this Hall are best of the best because you made it to the finale. The GTO complex not only allows overcoming oneself and become healthier but also travel around Russia, get familiar with each other and get new emotions and impressions.” In team event, just like the last year, the first prize was earned by representatives of Belgorod National Research University (4933 points). The rolling GTO Cup returned to Belgorod. Placed the second were the athletes from FSBEI HE Tver State Medical University (4715 points). The third place went to students of Udmurt State University (4660 points).

The Ural Hawk team representing the Chelyabinsk region and consisting of SUSU closed up the top-5 (4581 points).

“I had the honor to greet the athletes at the opening ceremony, so I wished them all victory, especially to Chelyabinsk athletes. The strongest athletes got victorious, but nevertheless, our team has improved its last year’s result, and the athletes improved their personal scores compared to the previous festival,” said Vyacheslav Burmatov, the Vice-Rector for Student Affairs. Head of the Ural Hawk Students’ Sports Club, Ekaterina Kalugina, told us about training of SUSU athletes and about their plans for the future.

“Our athletes worked really hard to get ready for this Festival; mainly, it was individual training of each athlete. Now we are going to carry out an analysis to determine our weak spots and identify the issues to work on in order to improve our results in the next year.”

In individual event of all-around competition among women, the winners are:

In individual event of all-around competition among men, the winners are:

The closing ceremony concluded with taking photos at a special awards stand in the hall of the 2st floor at SUSU. The celebratory atmosphere of the event had been created by performance teams of the SUSU Recreation Centre, which provided a colorful performance with dancing and singing.

Let us note that the GTO All-Russia Festival is a large-scale sport event featuring the strongest student teams of the country. About 19 thousand students from 41 constituents of the Russian Federation took part in selection stages to make it to the all-Russian finale. In Russia, the GTO Complex is being implemented within the federal project called “Sport is the Norm of Life”, which is included in the national project called “Demography”. The purpose of the project is to attract 55% of population to systematic sport exercises.