SUSU Students to Join the Ranks of “Digital Volunteers” 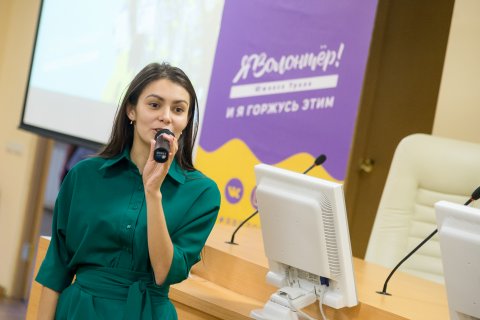 On Thursday, September 19th, students of Chelyabinsk universities gathered at the SUSU’s Sigma university complex to learn about the projects being fulfilled by the Non-commercial Organisation South Ural Association of Volunteers, and to join the ranks of “Digital Volunteers”.

Today, when the deadline for the region’s transition from analogue to digital broadcasting is approaching, there has arisen a topical issue of helping the senior citizens connect and tune their TV top boxes. All other regions have either already joined this process, or just beginning to, and now it is time to do the same in the Chelyabinsk Region. Anyone can become a “Digital Volunteer”. All you need is register in your university and take simple training. On behalf of SUSU, 70 students have filed their applications to participate in this social project.

“It is not difficult to attract volunteers, because SUSU has always had strong traditions of volunteering; and thanks to close work of the United Student Council with students, we’ve managed to quickly form the team of volunteers from all the university schools regardless of their expertise in the field of digital technologies. And, in the very beginning, we’ve discussed that this activity shall not affect the studies of the SUSU students,” shares Vyacheslav Burmatov, SUSU Vice-Rector for Student Affairs.

Students can do their volunteer work in any time convenient for them. They will also have a possibility to choose the addresses of requests, in order to optimize the work. Here is how it will be happening: a request is received by the call centre and is recorded in a general electronic table, after that a volunteer in his/her personal account chooses a request and reports this to the team leader. Next, the most convenient time is being discussed with the client, in coordination with the volunteer, and after that the volunteer visits the client and tunes the equipment. Having performed this job, the volunteer puts a relevant mark in his/her personal account. Students do this job for free and absolutely voluntarily, but the most active ones get support from the South Ural Association of Volunteers.

“By the way, the most active volunteers, who score maximum points in the rating as a result of participating in the Association’s projects, will be awarded prizes, like, modern gadgets, urban-transport passes, and more,” shares Head of the Association Alena Persidskaya.

As to the technical aspect of the project, it is pretty easy: put two plugs into a top box and two plugs into a TV-set, and launch the automatic tuning using a remote control. It is more important to explain to the elder citizens how to operate a remote control, switch the channels, and so on. All the volunteers take obligatory training, which comprises two blocks: theory and practice.

“I’ve already worked as volunteer in my native city, so I’ve heard about this project. And when we were offered by the university to consider various extracurricular activities, I decided to sing in for volunteering at once. I believe it to be very important to help senior citizens to switch from the analogue television to digital one,” shares Anastasiya Chertova, a first-year student.

There are not that many requests for connecting to the digital TV as of yet: volunteers do 4-5 visits a day. However, the upsurge of requests is expected directly after the analogue TV is switched off, that is by the middle of October. That is why already today additional digital volunteer forces are being recruited.