Science Rejuvenation, or Why Does a Microwave Oven Need a Cap 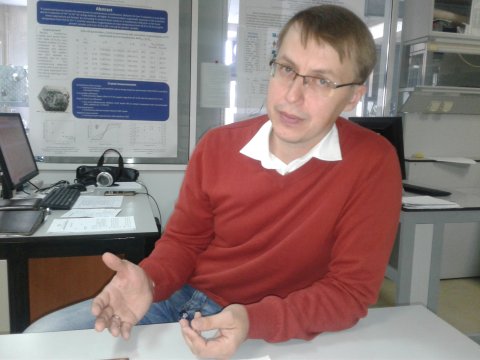 Fundamental Russian science is getting younger. The efforts by the government targeted at this yield tangible results. 36-year-old scientist from SUSU, Doctor of Sciences (Chemistry), Associate Professor Denis Vinnik with solid advantages has become the university’s leader in the number of quality publications over the last academic year (TOP 25 in SCOPUS database). For eight years already, Denis Vinnik is the Head of the Council of Young Scientists and Specialists of the Chelyabinsk region. At that, he does not just know everything about the “science rejuvenation” phenomenon but makes breakthrough discoveries himself.

Denis Vinnik graduated from Language Lyceum No. 93 of the city of Chelyabinsk in 2000 and got enrolled to SUSU at the Department of Physical Chemistry. In November of 2009 he defended his Candidate’s thesis. He’s been acting as Associate Professor at the Department of Physical Chemistry since 2010. In March of 2018, he defended his Doctoral thesis and obtained the title as the Doctor of Sciences (Chemistry). In July of 2019, he got awarded with the title as an Associate Professor of the State Commission for Academic Degrees and Titles in the specialty of Physical Chemistry. He has the highest Hirsch index among permanent SUSU employees (this index is 19 according to the international Scopus system). He is an awardee of the Scholarship of the President of the Russian Federation for young scientists. He is the Head of the Crystal Growth Laboratory at the SUSU Nanotechnology REC. He is the editor of Symmetry journal’s special edition on Materials Science published by MDPI.

– Nauka (Science) National Project provides for a significant increase in the number of publications by Russian scientists. Is it so that you’ve anticipated this tendency and started working intensively before the others?

– Many years ago, my research advisor Gennady Mikhailov gave me a very valuable advice, which I surprisingly followed (although usually I am very skeptical about giving advice). He said: “You need to develop partnership with researchers from other institutions, cities and countries.” We’ve set the goal to become recognizable in scientific circles. For the first Conference that followed, I brought the first monocrystals which have been grown at my participation. There were two exhibitions: the one was mine and the other belonged to Monocrystal plant which is one of the world’s leaders in leuco sapphire production. Our work excited a big interest among our colleagues. After that we had a lot of experiments, projects, both initiative and sponsored. But we have passed this way and formed a team. Today we can say that we have created a prospective informative scientific direction in the sphere of Materials Science complying with today’s requirements: worldwide recognizability, the number of publications, high values in the number and quality of publications as well as in the Hirsch index.

– In many people’s mind, a Doctor of Sciences is an intelligent old man. Is it time to break the stereotype? What does an average researcher look like today?

– Science is getting younger rapidly. There are more and more possibilities for research coming to existence, even for those of a very young age. It becomes more frequently that working in laboratories excites interest among young people who have just got enrolled at a university, or even schoolchildren. In accordance with their interests, young people have a chance to become a member of a research team and acquire new knowledge within a short period of time. For example, a lot of attention at SUSU is paid to training of specialists in the sphere of Materials Science. We have young people coming to us who learned about the Crystal Growth Laboratory from their friends or mass media. They come interested and this is great! They say: “We want to create new materials which will not just exist by themselves but will be able to be put into practice in the future.” After a student gets the experience of creating some new material and holds the result of one’s work in one’s hands, the student start treating the study process differently. The student starts forming the coherent picture of interrelated disciplines and study courses. From the standpoint of human resource training, this is very important. The sooner students come to us, the more results, experience and skills they acquire, which eventually creates competitive advantage in the labor market. 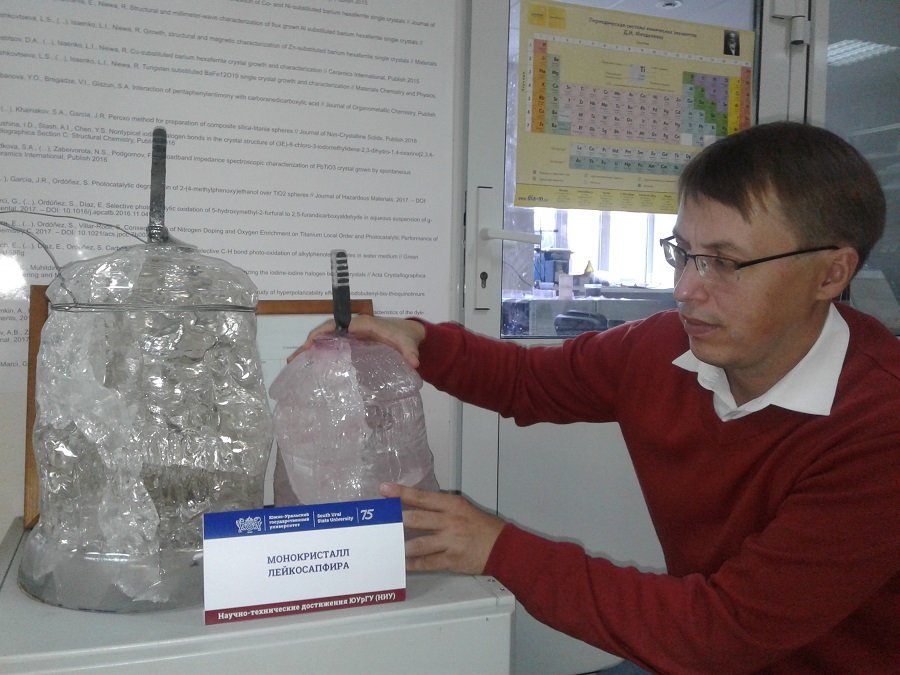 – Are there many inquiring minds among underclassmen?

– As a rule, more than a half of students in a strong study group show interest to research and development. Some part of them starts bringing their interests into reality. Working in our Laboratory requires complete engagement into the subject; it requires diligence, self-organisation and taking initiative. There is no step-by-step guideline here. By the time for students to graduate, quantity turns into quality and their number reduces – only a few make it to postgraduate studies. By the way, the inquiring mind that leads the students to our Laboratory does not obligate them to pursue science. The accumulated research experience and acquired skills of working with advanced equipment form a universal specialist. Such a person is free to choose one’s own path. Aside from science, one can commit oneself to manufacturing or managerial spheres. But the acquired competencies and the developed morphology of the brain will always provide good starting positions and further growth in any sphere of economics.

– You’ve got a lot of experience despite the young age. Can you recognize a future science guru in a freshman at a glance?

– I would not dare to make judgements regarding someone’s talents at neither the first nor the second glance. There are no explicit criteria which would allow assessing one’s disposition for research activity. In this case, grades in the student record book are not important. Everybody should have a chance to pursue science. However, not many are able to persist and hold one’s ground in science.

– So what are the scientific outlooks? Shall we expect the breakthrough discoveries so much anticipated by the leadership of our country?

– The thing is, we have already achieved certain breakthrough results in the sphere of magnetic materials. We are actively developing the direction of ferrites. The materials can be used to produce elements for electronics and for various coatings, including the ones used in construction. For several years already, the World Health Organization has been pressing on the new global problem, which is electromagnetic pollution. Every electronic device creates an electromagnetic field around oneself. These fields overlap one over another. So potentially, our materials can be used as component parts in structures of social objects (for example, in roofing for kindergartens) so that electromagnetic emanation inside such buildings was considerably lesser.

– So, after all, electromagnetic emanation is dangerous, isn’t it?

– It barely makes us healthier. Many people at home have microwave ovens which create a quite strong electromagnetic field around themselves. Therefore, this is another object whose influence should be minimized. We can use the ferrite cap, which is a composite materials preventing propagation of electromagnetic waves.

I can make another example of using our materials. There are tens or even millions various elements of electronic base inside complex electronic devices. Each one of them works at a certain frequency and again generates an electromagnetic filed. Hence, one needs to ensure isolation of certain elements inside this device in order to make its operation more stable. In this case, they do not interfere with one another, and the complex will be operating for a longer period and in a more stable way. These are the cases in which ferrite-containing coatings can be applied.

– The question that follows is won’t the cap itself be radioactive?

– It does not emanate anything, only absorbs. It is not toxic, does not have any smell or taste… (smiling). It is just fine!

– Is it true that you can make aluminum out of iron?

– Ferrites are one of the world’s trends in materials science. Their properties are set by modifying their structure. Today scientists’ efforts are targeted at making the produced material to be usable in extra-high frequency electronics. Young SUSU scientists are the first in the world who have achieved 50-% substitution of iron to aluminum in volumetric crystals. This has become one of the most frequently-defended theses for Doctoral dissertations. Such alteration of chemical composition and structure increases the resonance frequency twice, which can be potentially used when switching mobile phones from currently-used 4G to currently-developing 5G. This means accelerated data transmission.

– Medieval alchemists would have gotten envy of you. Is there a chance to invent a perpetual smartphone?

– Nothing is perpetual. Modern smartphones can have a long service life as well if used correctly.

– Didn’t you have a disturbing idea of creating a perpetuum mobile when you were younger?

– No, I’ve never been interested in the eternal engine. In my childhood, I loved biology. I used to study aquatic insects, for example. From that time and till the present, I am interested in aquariums. I even got one installed at the Laboratory. Meanwhile, I’ve never regretted having chosen the Department of Physical Chemistry. This has become an excellent school for me!

– I guess you used to be an excellent student…

– No, I wasn’t. And my diploma is blue. This is just a matter of priorities and desires. I’ve never had a goal to get a diploma with honours. During the time of my study at school and later at the university, I had different interests aside from getting excellent grades for all subjects. In my opinion, what is important is to learn determining priorities, make decisions and bear responsibility as soon as possible.

– It’s high time to determine the priority: getting the Nobel Prize. Is your breakthrough discovery worth of it?

– Let us advance step by step. The main reward for a young scientist in our country is the Presidential Award. It gets awarded annually on February 8, on the Day of Science, at the State Kremlin Palace. Let us wait the results.

Photos by the author

P. S. Harmless nature of SUSU young scientists’ inventions is proved by the following fact: not a single fish in the aquarium was harmed in the process of working with the Laboratory equipment.