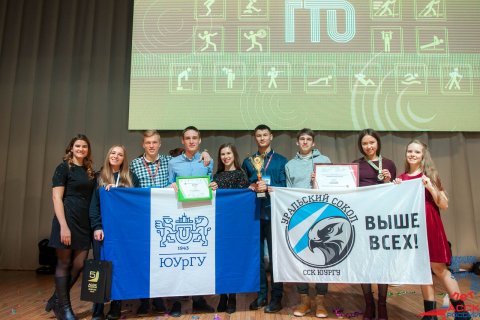 Chelyabinsk is getting ready for the main sport event of this fall: All-Russian Festival called All-Russian Physical Education and Sport Complex “Ready for Labor and Defense”, which is to take place on September 19th through 24th at the track and field complex named after E. Elesina. One of the participants competing for the top prizes will be the Ural Hawk team consisting of South Ural State University students.

GTO (Ready for Labor and Defense) All-Russian Festival is a massive and important event featuring the strongest student teams of the country. More than 19 thousand students from 41 constituents of the Russian Federation took part in selective stages in order to make it to the All-Russian Finals.

At the previous analogue competition held in Sochi, the Ural Hawk resulted in the 6th place. This year, according to the team leaders, the athletes planning to improve the result.

“A lot of attention at SUSU is paid to sports development,” affirms the Head of the regional SMM Directorate and the GTO All-Russian Physical Education and Sport Complex, Aleksandr Belenkov. “A Modern Centre for GTO Testing has been established at SUSU, where all the willing can reach the norm of the Complex. Students don’t stand aside; they are active and sport-loving; they demonstrate good results in reaching the GTO norms.”

According to terms and conditions of the competition, each team consists of 8 participants (4 male and 4 female). Results will be drawn in both individual and team events. Members of the Ural Hawk team have already been determined. The team includes best of the best: Pavel Smirnov, Ramis Kamalov, Evgeny Rudik, Maksim Leshchev, Kristina Efimenko, Emilia Khasanova, Elizaveta Yulenkova and Kristina Ivshina. Some of the team members have already got experience of taking part in suchlike festivals. Two of them became prize holders in individual event at the last year’s festival. Namely, Emilia Khasanova was placed the 2nd with 578 points, and Pavel Smirnov took the third place with the result of 939 points.

There are other outstanding team members who managed to demonstrate their skills in various kinds of sports. For example, Maksim Leshchev participated in many endurance competitions: three times he swam across the Turgoyak lake, run the Chelyabinsk marathon, took part in various skyrunning competitions, etc. Evgeny Rudik is a well-known master of sprint running, multiple winner of regional track and field competitions. Kristina Ivshina is a reserve officer (signal corps), has two higher education degrees with honours, and exercises track and field and flag football.

“Our team is intensively preparing for the upcoming Festival; students have already got experience of taking part in such like competitions,” says representative of the team, Ekaterina Kalugina. “All of them intend to get to a prize-winning place at least. Of course, our competitors are strong, but we are ready to show the best we can and prove that SUSU is the most athletic university of the country.”

As a reminder, implementation of the GTO complex at the territory of the Russian Federation is one of the tools for completing the federal project called Sport is the Norm of Life included in Demography national project. The main goal of this federal project is to get the share of citizens practicing physical education and sport to 55%.

If you want to become a volunteer at the Festival, please click the link.