South Ural State University was visited by Culture and Education Attaché of the Embassy of the Republic of Iraq in the Russian Federation, Bassim Hasan Al-Haideri. Within the visit, a discussion regarding expansion of academic and research cooperation between SUSU and the Republic of Iraq took place.

Today, the university actively develops international communication with embassies, representation offices and higher education institutions of the Republic of Iraq. There are more than 80 students at SUSU studying on the main training programmes; about 120 more students are expected to get enrolled this year; there are six researchers and one lecturer from this country employed at the university. Rector Aleksnadr Shestakov said that cooperation with Iraq has become the starting point for development of SUSU as an international higher education institution.

“Our large-scale cooperation with foreign countries started precisely from the Republic of Iraq. Seven years ago, we visited this country upon an invitation of the Iraqi Minister of Education. We had a constructive discussion regarding the issues of education and science; many contacts have been established. Today, a big number of students from Iraq are studying at SUSU on Bachelor’s, Master’s and Postgraduate programmes,” stressed the SUSU Rector. “We understand that the Republic of Iraq needs high-level specialists. We wish to increase the number of international students and postgraduates who can get a degree at SUSU. Our university does many things to help them adapt. Speaking of which, it was not that long ago that SUSU took prize-winning place at the All-Russian contest on adaptation of students from abroad. This direction is an important component of a big effort contributing to attract international students to our university.”

Within the visit of the Culture and Education Attaché of the Embassy of the Republic of Iraq in Moscow, meetings were also held with Vice-Rector for International Relations, Olga Yaroshenko, representatives of the International Office, Director of the Institute of Social Sciences and Humanities, Elena Ponomareva, Dean of the Faculty of Journalism, Liudmila Shesterkina, and Director of the Institute of Sport, Tourism and Service, Vadim Erlikh. 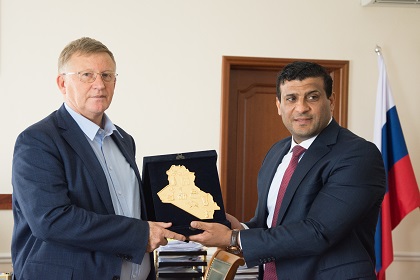 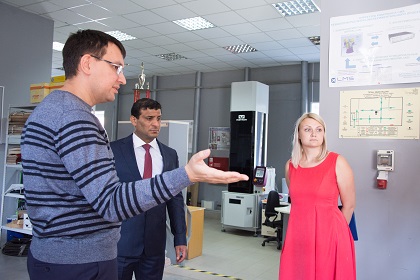 At the moment, the already-discussed possibilities include academic staff exchange, academic mobility of students, and cooperation in such prospective spheres as IT, Materials Science, Journalism, Sports Science, and many more. SUSU is also expected to become the first higher education institution to sign an agreement on cooperation with the Republic of Iraq at the meeting of the Minister of Education of Iraq and the Minister of Higher Education and Science of the Russian Federation, which is to be held in September of 2019 in Moscow.

“I came to visit upon an invitation from the Rector, and I would like to note that your university is characterized as very hospitable. I know this by my own experience, because I first visited SUSU back in my student years together with a big delegation from Iraq. Today, I am already acting as an advisor in the issues regarding culture and education to help today’s students overcome various difficulties. This time, my mission was to discuss the possibility to sign a contract between the Rector of SUSU and the Minister of Education and Culture of Iraq. We intend to strengthen relationships with various higher education institutions in Russia, and SUSU is of a special importance for us because of the big number of Iraqi students studying there. We hope our relationships are only going to strengthen in the future,” said Bassim Hasan Al-Haideri.

Another important topic for discussion was adaptation of students from Iraq in new-for-them conditions of living and studying in Russia. For that purpose, the Arab Culture Centre is to be established at SUSU. The Culture and Education Attaché of the Embassy of the Republic of Iraq assured the readiness of the Embassy to support development of the Centre.

“Students from Iraq occupy the leading spot in our big and friendly multinational family. They are distinctive with their benevolence and activity; they take active participation in activities arranged by the SUSU Sociocultural Adaptation Centre and the South Ural Association of International Students. Many SUSU alumni, upon their return to Iraq, occupy decent job positions. In order to develop the system of adaptation, we are planning to establish Arab Culture Centre at our university,” said SUSU Vice-Rector for International Relations, Olga Yaroshenko. “This project has truly become relevant for long ago. Thanks to the Centre, students from Arab countries will be able to share their culture, and Russian students will have a chance to take active participation in the Centre’s activity. Development of the Centre will favour the existence of true affinity of souls and cultures as well as experience exchange.” 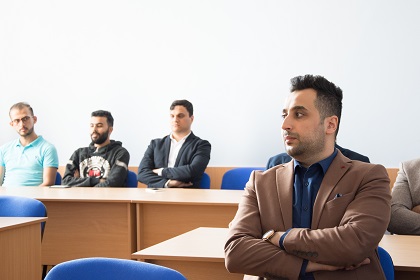 “These issues are very topical for me as well, because I’ve been studying at SUSU for more than six years already; here I first studied Programming within a Master’s programme taught in English, and now I continue my studies within a postgraduate programme. I like it here a lot. I’ve been to many cities: Moscow, Saint Petersburg, Kazan, Krasnodar and many others, but people in Chelyabinsk seem to be more sympathetic and kind. Besides, I’m not alone here: my father has been living in Russia since 2008, me and my two brothers came a bit later. We all are studying in this country, and after finishing my study I think to stay in Russia and find a job, maybe start my own business,” said postgraduate student of the School of Electronic Engineering and Computer Science, Furkan Albo Zhuaid.

Let us note that November 14th through 16th of 2019, SUSU is to hold a Forum of international students and alumni called URAL FEST. This event will bring together students and alumni from various countries who have chosen Russian universities to get a prestigious higher education degree. Experts from Moscow and Forum participants from Yekaterinburg, Chelyabinsk, Tyumen, Orenburg, Kurgan, Ufa and other cities will discuss the specificity of studying and living of international students in new-for-them conditions, as well as intercultural communication, effective cooperation between students, alumni and the university, and many other issues. There will be educational workshops, international excursions, cultural, entertaining and sport events arranged for participants of the Forum. All of this will allow to consider development of international connections in the sphere of education, establish perspective acquaintances and make a contribution to internationalization of Russian higher education institutions from a new point of view.