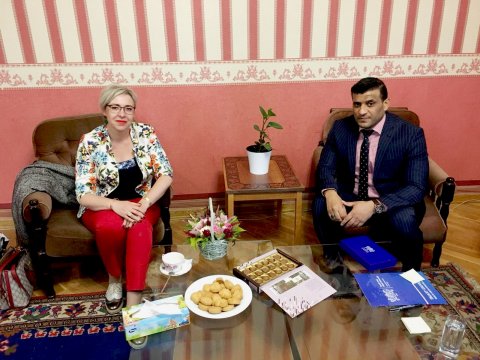 On June 30th, the Vice-Rector for International Relations of South Ural State University visited the Embassies of Iraq and Sudan, and on August 8th – the Embassies of Egypt, Yemen, and Morocco for the purposes of promoting South Ural State University in these countries, as well as making it more recognizable there and attracting students and academic staff of the universities of those countries to various programmes being offered by our university.

Within the frameworks of her visit to the Embassies, Olga Yaroshenko not only delivered presentation of our university, but also highlighted those factors, which could be useful for development of the collaboration with the universities of Arab countries. As a result of this work, promising plans were formed with regard to collaboration in the scientific field, attracting of academic staff and students to SUSU.

Counsellor of the Embassy of the Republic of Sudan Ahmed Khalifa Mohamedali Idris noted the high demand for the Russian Federation Master’s programmes (taught in English) among the students of Sudan, as well as showed interest in the Master’s programmes, which SUSU offers.

Second Secretary of the Embassy of Egypt in the Russian Federation, and Consul of Egypt in Moscow Mohamed Elwi expressed his interest in working with SUSU and offered the collaboration with 5 universities under the Double Degree programmes, summer schools, joint educational programmes, and scientific fields. The most interest was shown in the academic mobility programmes for the academic staff of the universities of Egypt. Attention was also paid to the SUSU programmes for international students (taught in English), which give advantages for their degrees beyond the territory of the Russian Federation.

Ambassador of the Republic of Yemen in the Russian Federation Ahmed Salem al-Waheishi was mostly interested in developing the scientific fields of ecology, chemistry, and information technologies. His attention was also drawn by the possibility for the academic staff of the universities of Yemen to work at SUSU. In addition, he learned that the students of Yemen enjoy an opportunity to file applications for quota-based studies at SUSU on their own.

Minister-Counsellor of the Kingdom of Morocco, Deputy Head of the Mission Abdelillah El Kaisi shared that they are ready for the international collaboration and that currently the Embassy is willing to search for the mutually beneficial points of contact with SUSU. Of most interest were such fields as biotechnologies and clinical psychology. The enrolees from Morocco first and foremost consider the Bachelor’s programmes of SUSU for their fundamental training as students. What is more, the universities of Morocco are interested in our university as in a platform for joint organization of an international conference.

Over 2,500 international students from 52 countries from around the world are studying in various programmes and fields at South Ural State University. The share of the students from Arab countries equals more than 120 people studying in general education programmes, and over 230 students more are planning to come to SUSU for the new academic year.

Following the results of interaction with the Embassies of the Arab countries, it is planned to open an Arab Culture Centre for better integration of students from Arab countries studying in the South Ural region into unified community, and to help them fulfil their creativity potential during cultural events held with the support from SUSU. The Embassies of Egypt, Iraq, and Morocco expressed their wish to render direct support in the opening of the Arab Culture Centre. Deputy Ambassador of Morocco suggested to open an Arab Culture Museum at the Centre and promised that the Embassy will make its contribution to its development. Attache for Cultural Relations of the Embassy of the Republic of Iraq D.R. Bassim-Hasin assured that the Embassy is willing to sign an agreement with the future Centre, act as a mentor, and support the development of the Centre of the Arab Countries Culture in the South Ural region.