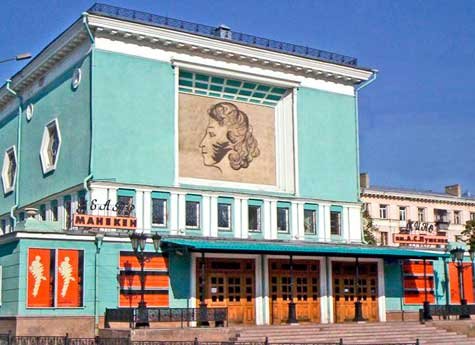 September 5th through September 12th Chelyabinsk will be welcoming Predchustvie international film festival for the second time. Last Friday, the organizers shared on the major projects of the forthcoming big-scale cultural event.

First of all, Predchustvie film festival was officially assigned an international status. This makes it possible to screen movies without the need for obtaining distribution certificates. Moreover, for this year the organizers are preparing a big program of documentaries, which will be mixed with feature films and new projects – that is why the number of venues was increased.

“Like it was last year, there will be international films, and Russian films will also be included on the program. We will screen five or six documentaries, as well as story (feature) films. Like last year, we will involve venues of enterprises within the frameworks of out-of-competition screening. I hope, there will be more than one venue. Last year it was KONAR Plant, they rendered us really great support, and their screening room is fantastic. This year, we hope to have to industrial venues,” notes Executive Director of Predchustvie film festival Angelina Golikova.

“This is a new venue by the Department of Culture, who are making a step towards the festival, what has provided us with the opportunity to screen experimental films in a district of Chelyabinsk, which is far from the city centre. The program will be exactly the same as in other cinema theatres. These are movies for general public, and not for the art hangout. It will be interesting to everyone,” stresses Angelina Golikova.

The Predchustvie 2019 program is in progress of being formed, and the organizers are accepting applications for the participation. The first film of the event to be screened for the citizens of the South Ural region will be a premiere titled Brain. Evolution by a Ural region’s director Yuliya Kiseleva, which will be describing the modern brain-related research studies.

“People are currently very interested in this topic. They’re trying to figure out how information influences our brain, what happens to it, as it obviously undergoes changes. Our children, who growing up in the context of new technologies, are a completely different generation. That’s why research on this topic is fascinating. We’re also happy about the fact both the director and the main hero of the movie will come to Chelyabinsk,” comments the film festival’s Executive Director.

Among feature films, Т-34 starring Alexander Petrov will be screened. In addition, the festival program will include a documentary titled Tank 34, which will show how this legendary armoured fighting vehicle was really manufactured, who were the people behind it, and how the tank was used in the Great Patriotic War. This film was created with great love to the Ural region’s heroes, and this helps cultivate true and unfeigned patriotism, believes Angelina Golikova. The movie’s authors will also visit Chelyabinsk.

The issue of ecology, which is topical for the Chelyabinsk Region, will also become one of the festival’s themes. Father of Baikal documentary will tell about a mysterious sculpture by a world-famous artist Dashi, which is installed on the lake shore. The movie shows picturesque landscapes of Baikal and mesmerizes the audience from the very first seconds, that is why it is simply a must to watch it on big screen, the organizers insist. Sculptures by Dashi are installed in many cities around the world, and in 2007 he acted as production designer for Mongol movie directed by Sergei Bodrov.

“The film tells about the Russian blind football team. These guys won the World Championship. It’s not about disabled people at all. It’s a really good story. These guys are functioning more fully than all of us put together. When I was watching this movie, I thought that it’s me who is a person with disabilities, and not them,” shares Angelina Golikova.

The festival program will also be filled with entertainment. One of this year’s main technological gimmicks is the technology of augmented reality (AR). It immerses you into a virtual situation and gives you a feeling of full immersion, in this way it is fundamentally different from the virtual reality technology.

“We had virtual reality last year, we will also have this year, but will add augmented reality as well – it’s like you’re not just watching, but finding yourself inside a situation and taking action. This technology will be provided by the citizens of Tyumen, and it will be good interregional cultural collaboration,” notes Producer of Predchustvie film festival, director Anastasiya Bezruk.

Moreover, the program will include pitching (film scenarios presentation), various master classes and meetings of people, who love movies and work in the film production sector. What will not change is the concept of the festival. The event will still be devoted to new technologies and our life with them in it.