Island 10-22: Team SUSU Took Part in Elaboration of the Best Practices for Digital Transformation of the University 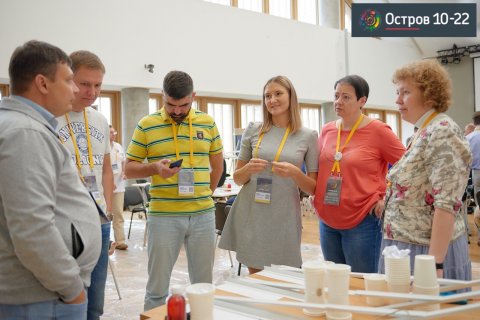 Vice-Rector for Academic Affairs, Andrey Shmidt, took part in the laboratory on Digital Transformation of the university. In the course of operation, the university’s mission and strategic goals which allow it fitting into the Russian and the global higher educational system were discussed. According to speakers of the track, in particular Petr Shchedrovitsky, the system of management in a common Russian higher education institution should undertake changes; a cardinal transformation of the university’s strategic development programme is necessary.

For each member of the university team, participation in the Island’s operation has become a significant step in both professional and personal development. While summarizing the overall and personal results of working at the educational workshop, researchers and executive officers of the university shared their emotions, professional discoveries and skills acquired at the Island.

Director of the School of Electronic Engineering and Computer Science, Gleb Radchenko;

“For me, the most interesting thing at the Island was the experience of leading universities (both national and foreign) in solving the problems of the university’s digitalization. For example, there is a Laboratory for analysis of academic activities operating at the University of Michigan, which has developed and implemented digital boards for mentors and students of the university. At these boards, each student can see one’s position respective to other students studying the same subjects, and the mentor gets a beforehand notification if some student has got problems with studying. This can be implemented at our university as well, because, starting from the new academic year, SUSU is going to launch the point rating system of education, within which a course grade will be forming gradually, in the process of mastering a discipline.

Moreover, application of the method of intelligent data analysis allows making the study process to be considerably more transparent and understandable for both students and lecturers.”

Head of the Department of Economics of Business and Project Management, Natalia Dzenzelyuk:

“My major impression at the Island was arrangement of such a massive event. Even in the process of registration, which is the time of maximal crowding, there were no too long and useless queues. Receiving almost 2 000 people at the Island and excellently, maximally quickly responding to slightest disarrangements truly is a very serious level of arrangement.

While being at the Island, I’ve changed my personal worldview and my attitude towards management of my own efficiency. Speaking about the vector of the university’s development, each master class and every word I heard at the Island only proved the rightness of its direction. Things that many higher education institutions only start considering by the results of the Island have already been considered through and implemented by our SUSU. It may be noted that our university is the leader of digital transformation. However, this only makes our task even more difficult: it is always easier to catch up with the leader than paving the way. Without a doubt, working at the Island educational workshop will add our team on strength, inspiration and new ideas in achieving the goals set!”

“Island 10-22 is the venue for meeting of people who want to conduct a technological breakthrough. During the initial days of the workshop, it was surely difficult to spend 16 hours per day under strict regulatory constraints with a huge number of unfamiliar people. But after several days you understand how informative these days were. You consider people around you as a large team which looks towards the same direction of development and transformation. The Island provides an impulse for development of one’s own competencies. Being a specialist in innovative project support, it was interesting for me to learn of how to invite new funds to the university, carry out an even more efficient implementation of scientific inventions into the real manufacture, as well as what project management tools exist in the global experience. Answers to many questions have been received here.”

Director of the Office for Programme 5-100 Project Management, Evgeny Belousov:

“In the second half of the Island’s operation, I took part in laboratory for opening pivot points at the university. Pivot point is the place where employers, students and alumni can exchange ideas. This is the place where an enrollee can learn everything about the university, having received an explanation in simple and understandable terms. Overall, the Island is the pivot point! It sets us for a special mode of operation.

For me personally, the Island gave an understanding that a university must work for students, satisfy their needs and demands. Educational programmes should be maximally specific. In fact, all national initiatives of the country are targeted at this.” 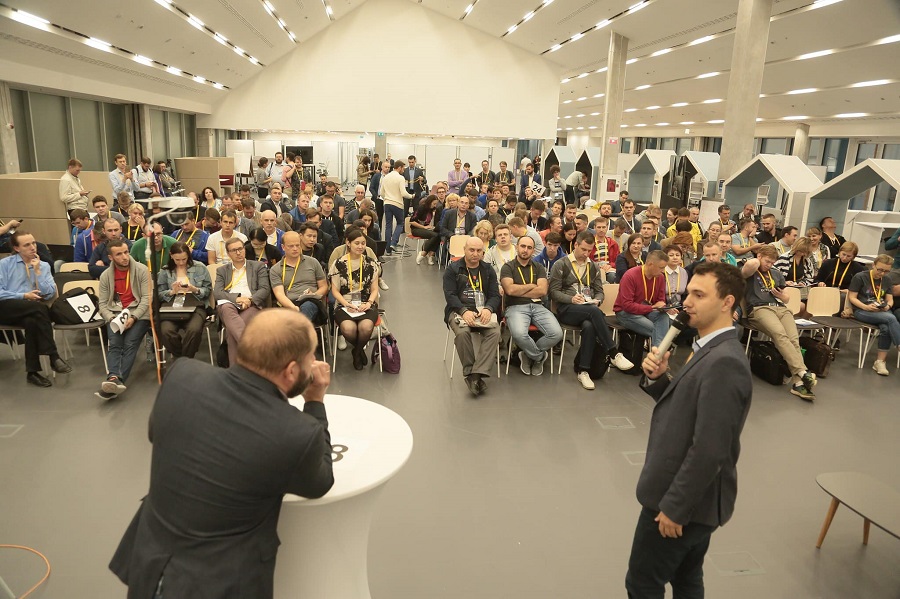 “For me, the Island first of all is a unique opportunity to acquire knowledge in the previously-unstudied spheres and have a chance to personally communicate and ask questions of famous scientists who are maîtres in their research spheres. In the second half of the Island operation, I participated in events of the laboratory of industrial projects on data management, where we learned project-based activity on managing data based on the data in the Internet of Things (IoT) systems.

In order to broaden up my mind, I completed basic courses of strategic thinking and even participated in training on tough negotiations and managerial battles. This is a very useful experience which allows structuring one’s knowledge and acquiring confidence in one’s power, which is applicable during a project defense.

Schedule at the Island is very eventful. It is for a reason they called this an intensive educational workshop. Attendance and activity of all participants at the Island is tracked using the system of digital footprint collection. Classes are held from 7:30 till 9 p.m., all this for 14 days without days off! Everything starts with sport exercises. Every morning, an ‘islander’ can choose any type of activity: from yoga to karate. Upon completion, one has to upload data from the tracker to the website. If someone fails to report, the team is going to receive the red card. Then follows studying in various laboratories of the Island, as well as master classes, thinking clubs, and teamwork where we make our proposals for the programme of SUSU’s development and get ready to defend it. In the evening we have visionary lectures by renowned scientists. After that, those who still got stamina go to the cultural events: concerts by invited groups. I went to a live music concert. The orchestra included violins, cellos, bas guitars and drums.

For me, the most important thing at the Island is the opportunity to attend the unique lectures. The initiative to take part in lectures and laboratories is stimulated by the highest level of lectors as well as by the possibility to choose one’s own training trajectory. I visited multiple interesting and really useful visionary lectures featuring invited scientists and political figures. One of the most important-for-me lectures was the lecture by a specialist in the sphere of artificial intelligence, Andrey Chikhotsky (his Hirsch index in Scopus is 63). I am grateful to the Island for the chance to communicate with people of such a level.”

“For me, Island 10-22 intensive educational workshop is the place where the best experiences and techniques of digital transformation in the sphere of education not just in Russia but at the international level are gathered together. It is here that I learned a number of new interesting approaches to arrangement of extracurricular activity at the university. I am planning to start actively implementing them at our university. Moreover, I managed to exchange experience with representatives of authoritative universities of the country. We are planning to keep maintaining fruitful connections.” 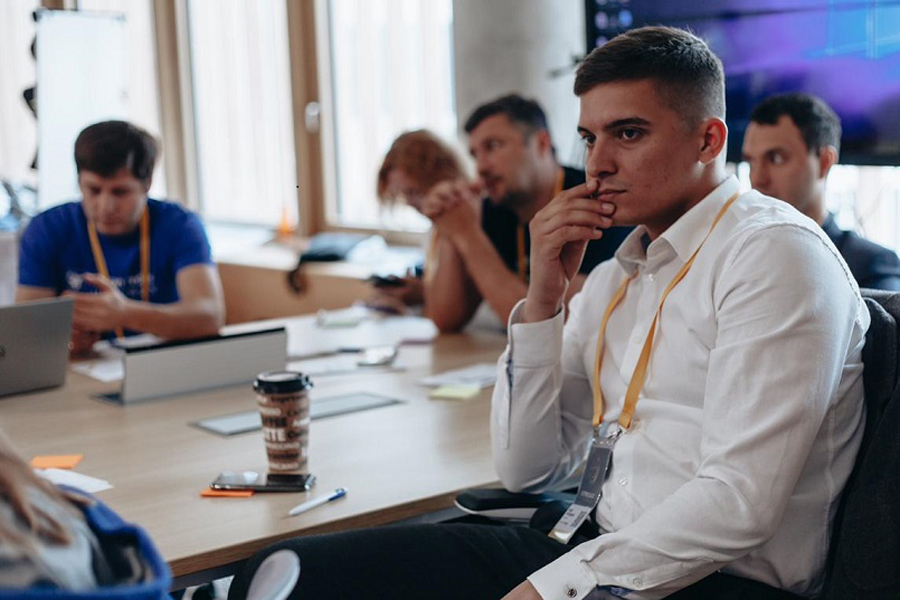 By the common opinion of the SUSU team members, the Island has become an important impulse for professional development of each of them. The team of SUSU at the Island 10-22 gained a unique experience and acquired new knowledge which scientists and executives of the university will be able to use in the future in order to enhance efficiency of the university’s digital transformation process, which inevitably touches upon educational, research and extracurricular activities.

One of the main results of the Island for the entire team, as everyone claimed, was development of the programme for the university’s development in the frameworks of the National Technology Initiative’s (NTI’s) matrix.

The programme provides for “Smart education” projects, which is targeted at students (project-based learning, distance technology, individual trajectories), and “Smart industry”. On July 22, SUSU team members are to defend the university’s development programme in front of the Minister of Science and Higher Education of the Russian Federation, Mikhail Kotyukov.

In case of a successful defense, the programme for the university’s development within the matrix of the National Technological Initiative (NTI) is to be put into practice at the university in accordance with the global challenges of Russian economy.

Text by Yulia Rudneva, photos from personal collections of the interviewees