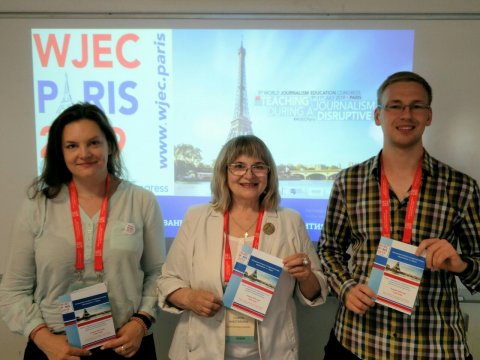 The delegation of South Ural State University for participation in the World Journalism Education Congress in Paris included Doctor of Sciences (Philology), Dean of the SUSU Faculty of Journalism, Professor Liudmila Shesterkina, Candidate of Sciences (Philology), Associate Professor at the Department of Journalism and Mass Communication, Anna Krasavina, and Head of SUSU’s Production Photo Studio Laboratory, editor of the Digital Communications Office at the Marketing and Strategic Communications Department, Oleg Igoshin. Overall, there were more than 700 people from 60 countries taking part in the Congress.

Dean of the SUSU Faculty of Journalism, Liudmila Shesterkina, together with a delegate from Lomonosov MSU acted as a representative of Russia in the Big Council of the Congress and had the right of voice in discussing the following issues: report on WJEC – 2019 operation; presentation of an application for WJEC – 2022; electing the Chairman of the World Council and the Leading Committee; and elaboration of the Paris declaration on the liberty of journalism education. Moreover, Liudmila Shesterkina acted as a Head of Russian section on Journalism Education in Russia under Conditions of Transmedia Development, in which participants were representatives of Faculties of Journalism of leading Russia’s universities: MSU, RUDN, SPBU, UNN, NCFU, and UrFU. Participants representing SUSU’s Faculty of Journalism presented the following reports within the section: “Project journalism and contemporary tendencies of journalism education at SUSU”, “Content specificities of virtual reality”, and “The image of science in contemporary photography”. 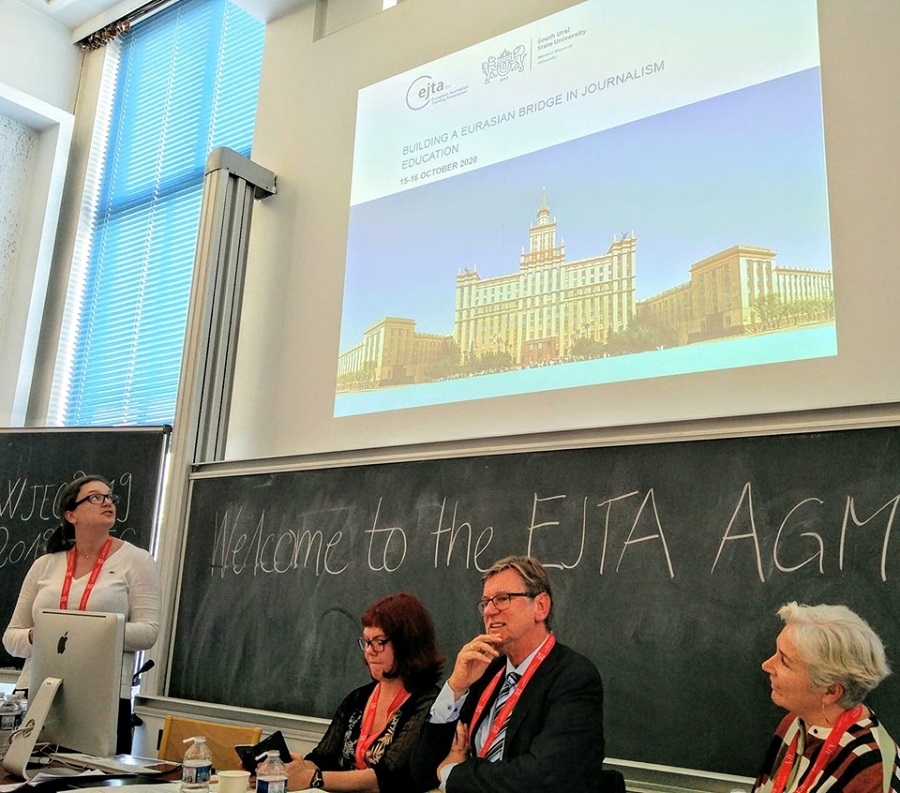 “For us, one of the most important events at the Congress was presentation of SUSU as the venue for holding the science-to-practice conference of the European Journalism Training Association entitled ‘Construction of a Eurasian Bridge in Journalism Education’ in 2020 in Chelyabinsk,” said Liudmila Shesterkina. “We held a number of consulting meetings with EJTA representatives from Belgium, Holland, Great Britain and France and took part in a meeting with Deans of Faculties of Journalism of the world’s leading higher education institutions. We have concluded important agreements regarding establishment of an international research laboratory of virtual reality at SUSU as well as continuation of Eurofactcheck educational project and participation of SUSU in a new EJTA’s project entitled ‘Journalism in the Global Context – Africa’.”

A big interest among participants of the Congress was excited by a report by Anna Krasavina in English on specificities of the virtual reality content, which was delivered within the section on Technological mutations and the future of journalistic practices. Text of the report was approved and accepted for publication in the Proceedings of WJEC.

Also, the SUSU delegation took part in the annual meeting held by the European Journalism Training Association (EJTA), a meeting of the working group on the EUfactcheck project, and an official ceremony of awarding the winners of creative contests within the Congress. SUSU’s Faculty of Journalism became the winner in such categories as Television and Photo Journalism. Among the winners were Oleg Igoshin, who took the first place for his photo entitled “Unity”, and SUSU-TV Television and Radio Company, which was place the first for its TV programme about science called “Tabula rasa”. SUSU representatives were awarded honorary credentials as the winners at the World Journalism Education Congress. We congratulate our colleagues on the awarding and wish them new accomplishments!